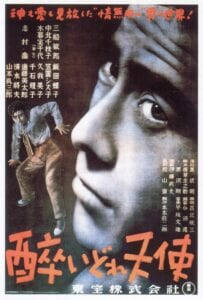 This is Akira Kurosawa’s eighth film he’s credited as a director, and the first film he made without extensive studio intervention. However, Kurosawa did make this film in a post WWII Japan that found itself under U.S. occupation. The U.S. censorship board, while thoroughly understaffed and completely overworked, heavily enforced strict American standards on the film.

That oversight didn’t stop Kurosawa from slipping many negative references past the censors. The opening scene shows some unlicensed prostitutes called pan pan girls who serviced U.S. servicemen. He dressed all the yakuza and their harlot girlfriends in Western clothing of the day. Also, the Jungle Boogie nightclub scene satirizes American jazz to name a few.

Drunken Angel’s three main actors are Takashi Shimura, Toshirô Mifune, and Reizaburô Yamamoto. Takashi Shimura, who made more films with Kurosawa than any other actor; appearing in 21 of his 30 films, plays the film’s lead, Doctor Sanada. The jaded physician sees himself as an angel for attempting to save Matsunaga from both his illness and his violent lifestyle even though he himself is flawed due to his alcoholism. Shimura effortlessly switches from gruff doctor to caring physician to uncontrollable alcoholic. His performance leaves you wondering if this doctor, who thinks of himself as an angel, should be loved, hated, or pitied.

Toshirô Mifune plays the tuberculosis-riddled yakuza named Matsunaga. He’s the perfect foil to Doctor Sanada. As a criminal leader, his illness leaves you wondering if he should be loved, hated, or pitied as well. Even though these two men are on opposite sides of the criminal spectrum, they have a great number of mutual qualities. The doctor sees a lot of his younger self in this yakuza which could be the true reason he want to save the man.

Drunken Angel is only the fourth film Mifune ever made, and it marks the first of 16 collaborations he will have with Akira Kurosawa in their storied careers. Originally, Kurosawa only intended Matsunaga as a small role. However, Mifune’s performance impressed him so much that he rewrote the script to the point that both Sanada and Matsunaga have equal screen-time. I would say that Mifune’s “impressing” him is an understatement as today, it’s generally considered that Mifune is to Kurosawa as John Wayne is to John Ford. Even though this is an early role for Mifune, his performance here is the highlight of the movie for me. It’s an amazing beginning to an illustrious career.

Finally, we have Reizaburô Yamamoto who plays the insidious yakuza named Okada; fresh out of jail, and carrying a serious case of VD, which was subtly slipped past the censors. His performance shows the yakuza as tough cowards whose time has passed. Out of all the main character’s roles, Okada’s seems to me as the one the censors most limited. They certainly would not stand for a criminal winning or looking in a good light in any manner. Yamamoto did an excellent job relaying that aspect, but his performance wasn’t quite as strong as the other two main actors.

The cinematography is excellent in this film as you’d expect from Kurosawa. He’s always visually amazing and most times groundbreaking. The censors would not allow any filmmaker of the time show burned-out buildings from the war’s aftermath. So, for Kurosawa’s slum, he prominently incorporated a poisonous bog at its center which served to be its own silent antagonist in the film. The film begins and ends at the bog; once in dark. Once in light. It is always the center of the people’s world no matter who you are.

In addition to this large diseased pool in the middle of the crowded district, the homes are small. The streets are tiny, and the people live in fear. This presentation leaves the viewer with a sense of unease while watching the film just as the townsfolk would experience unease everyday.

Drunken Angel is also the first time Kurosawa worked with his longtime composer Fumio Hayasaka. The intent of the music was to be a contrast with what was happening in certain scenes. For example, they used J. E. Jonasson’s playful The Cuckoo Waltz as a depressed Matsunaga walks down the street after overhearing his big boss telling Okada that he no longer has use for Matsunaga.

The music too in this film was subject to the U.S. censors. Originally, Kurosawa wanted Okada to play Mack the Knife when he returned to town from prison. However, the German Kurt Weill composed that song, and his equally German compadre, Bertolt Brecht, wrote the lyrics. The censors at the time forbid anything German in the film, so Kurosawa changed the song to The Killer’s Anthem which is still haunting in the film, and foreshadows the ending of the film.

Drunken Angel is a fine example of Japanese noir; dark, moody, and bleak. The film subtly addresses Kurosawa’s belief that his people lost their cultural identity during the United States’ occupation over them while also denouncing the yakuza for helping destroy communities through drugs, violence, and corruption. Takashi Shimura and Toshirô Mifune performances are outstanding. It’s no wonder why Kurosawa worked with them for so many years. Drunken Angel is a gem of a film, and Kurosawa did an excellent job telling a compelling story while appeasing the U.S. censors. It’s a film that stands the test of time, and one that all noir fans should see in their lifetime. Add the film to your collection today!