Scrooge McDuck, along with his grandnephews Huey, Dewey and Louie, Webby Vanderquack and dimwitted pilot Launchpad McQuack search for the lost treasure of the infamous thief Collie Baba. When they find the treasure, they find a mysterious lamp and a genie that can grant them all kinds of wishes. Unfortunately, Merlock the Magician wants that lamp, and he and his sidekick, Dijon the Thief, would do anything to get their hands on it. 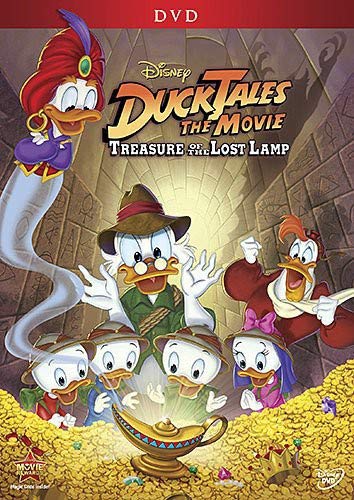 DUCKTALES: THE MOVIE TREASURE OF THE LOST LAMP

‘DuckTales the Movie: Treasure of the Lost Lamp’ Movie Summary 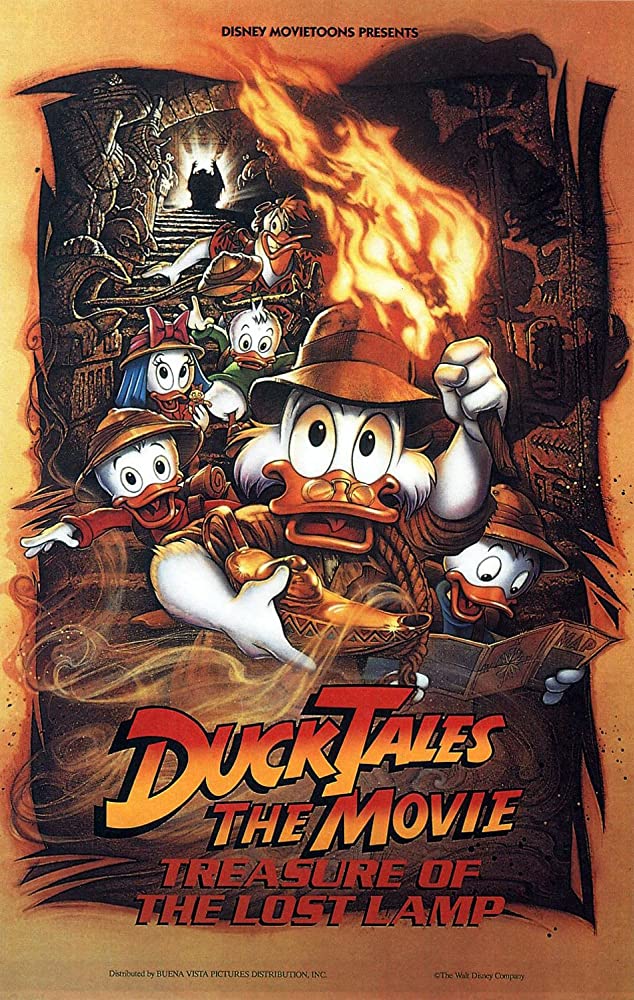 Billionaire Scrooge McDuck (Alan Young) travels to the Middle East to inspect a recently discovered treasure chest he is certain contains the treasure of the great thief Collie Baba. Scrooge is accompanied by Huey (Russi Taylor), Dewey (Russi Taylor), Louie (Russi Taylor), Webby Vanderquack (Russi Taylor), and Launchpad McQuack (Terence McGovern). The chest only contains some old clothes which disappoints Scrooge. However, the billionaire’s spirits rise when they find an ancient treasure map in the pocket of an old robe. They hire a thief, Dijon (Richard Libertini), to help guide them to the treasure. However, Scrooge’s group is not aware that Dijon secretly works for the evil sorcerer Merlock (Christopher Lloyd), who is seeking for something in Collie Baba’s treasure.

Scrooge’s group discovers a sand-covered pyramid. They find the treasure inside the pyramid, and Webby finds a lamp inside the treasure. Webby asks to keep the lamp and Scrooge allows her to keep it. Scrooge’s group is attacked by enormous scorpions while they are packing up the treasure to take back to Duckburg. The scorpions have been unleashed by Merlock and Dijon, who take advantage of the distraction to steal the treasure. Scrooge and his friends escape the pyramid and return to Duckburg. Merlock examines the treasure and discovers that the lamp is missing. He learns from Dijon that Webby took the lamp for herself.

Back in Duckburg, the children discover that the lamp holds a Genie (Rip Taylor), who is so excited to be freed from the lamp that he grants three wishes to each of the three kids. Their wishes include among other things, a baby elephant and a giant ice cream sundae. Genie tells the kids about Merlock, who used his wishes for eternal life and the destruction of Atlantis and Pompeii. Merlock also acquired a magic talisman which allowed him to take the form of any animal that he wishes.

The talisman also granted Merlock unlimited wishes. Genie tells the boys that Collie Baba stole the lamp from Merlock and hid it in his treasure. Merlock has spent centuries looking for the lamp ever since. The kids ask if they can wish for the talisman, but Genie tells them that is the only wish he cannot grant. The kids agree to hide Genie. The kids keep Genie hidden in the Scrooge’s mansion by telling their uncle that Genie is one of their fellow Woodchuck scout friends named Gene.

The next day, Webby uses her final wish to bring all her toys to life, which causes chaos in the mansion. The kids are forced to tell Scrooge Genie’s true identity. Scrooge is excited about Genie and immediately wishes to possess the treasure of Collie Baba for himself. Scrooge takes Genie and the lamp with him to the Archeological Society ball. Unbeknownst to Scrooge, he is followed by Merlock and Dijon who ambush Scrooge at the ball. Scrooge tries to make his escape from the ball, but mistakenly grabs the wrong lamp before leaving. Dijon finds the true lamp and decides to keep it for himself instead of giving it to Merlock.

Scrooge vows to stop Merlock, so the villain wishes him out of his house. Genie has the winds blow Scrooge towards the edge of the fortress. Scrooge hangs on to the edge for his life. The nephews use a slingshot to knock the lamp out of Merlock’s hands. The lamp falls into Scrooge’s hands, who loses his grip and falls towards Duckburg. Merlock changes into a griffin and fights for control of the lamp with Scrooge. Scrooge knocks the talisman from Merlock’s hand, causing the sorcerer to lose his power. Merlock falls to his death.

Scrooge uses his second wish to return himself, his family, and his Money Bin back to Duckburg. Once safely back on Earth, Scrooge uses his final wish to make Genie a real boy. The lamp turns to dust and Genie loses his magic powers. Dijon reverts back to his normal form and begins to stuff his pockets with Scrooge’s money. Scrooge chases after the thief as the film ends.