Jess Remsberg is a frontier scout who is searching for the murderer of his Comanche wife. During his quest, he joins a military convoy that is transporting inexperienced soldiers and weapons to Fort Concho. The convoy is joined by former Buffalo Solider Toller, businessperson Willard Grange, and Willard’s wife Ellen. The convoy is attacked by a renegade group of Apache who want the weapons and a mysterious child that Ellen possesses. Can Jess set aside his quest for vengeance to ensure that the convoy makes it safely to the fort? 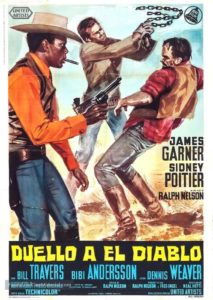 Jess Remsberg (James Garner) is a frontier scout who is searching for the murderer of his Comanche wife years before. Jess carries his wife’s scalp with him as a constant reminder that drives his need for vengeance. Jess has limited information as to the murderer other than he was white. One day while crossing a vast desert, Jess encounters Ellen Grange (Bibi Andersson), a white woman who is being pursued by a band of Apache. Jess rescues Ellen and returns her to her ungrateful, businessperson husband Willard Grange (Dennis Weaver) in the next town. Willard and Ellen have lived apart for most of the previous two years since Ellen was kidnapped by Apache. Ellen was rescued but then inexplicably returned to the Apache to live with the son of the Apache chief.

While in town, Jess meets with his friend Lieutenant “Scotty” McAllister (Bill Travers), a career military officer. Scotty informs Jess that the town marshal at Fort Concho has information about Jess’ murdered wife. In exchange, Jess informs Scotty that he found the dead tortured body of Scotty’s remote scout out in the desert. Scotty asks Jess to function as a temporary cavalry scout to lead an Army cavalry unit of twenty-five inexperienced soldiers taking horses, ammunition, and supplies to Fort Concho. The convoy will also contain Willard and Ellen as well as horse breaker Toller (Sidney Poitier), a former Buffalo Soldier. Toller has a contract to provide horses to the army and is accompanying the party to break horses during the journey.

My horse is dead and you’re back – shoulda been the other way around. Willard Grange (Dennis Weaver)

Prior to leaving, a group of men attempt to rape Ellen. She is rescued by Jess and Toller, although Willard shows no concern for his wife. On the day of departure, Ellen leaves again to return to the Apache. Willard does nothing, but Jess sets out to rescue her. During the rescue, Jess learns that Ellen had a child with the deceased son of the Apache chief, Chata (John Hoyt). Jess takes both Ellen and the child which causes Chata to send his soldiers out to retrieve his grandson. Jess and Ellen ride off to catch up with the military convoy.

The Apache eventually catch up and attack the supply wagons. The inexperienced soldiers suffer heavy losses, and the convoy loses their stocks of food and water. Scotty is seriously wounded during the attack but survives. The inexperienced soldiers begin to look to Toller for leadership due to his previous military experience. Jess and Ellen eventually catch up to the convoy using the baby as a shield from direct attack. The Apache surround the convoy.
Scotty explains to Jess and Toller that the Apache must not be allowed to acquire the weapons and ammunition. Scotty produces a plan to break out of the siege and flee to Diablo Canyon which is a more defensible position that also contains water. At the same time, Jess will ride out alone to race to Fort Concho to seek reinforcements from the army base. Once he accomplishes that goal, Jess is free to continue his search for his wife’s killer. However, Jess is pursued by Apache warriors, but the military scout successfully kills his pursuers.

Scotty’s plan is successful. The surviving members of the convoy make it to Diablo Canyon but find themselves pinned there. Jess barely makes it to Fort Concho after nearly dying of dehydration. The commander of the fort immediately dispatches troops to be sent to the canyon. In the canyon, the convoy is under constant attack as their forces are slowly dwindled. Willard is captured by the Apache and tortured by being tied upside down over an open flame overnight. Willard’s screams of pain prevent the members of the convoy from getting any sleep during the night.

Back at the fort, Jess confronts the sheriff as to the identity of his wife’s killer. The sheriff reveals that Willard Grange is his wife’s murderer. Willard had been out for revenge for what had been done to his wife. Jess races to the canyon. He arrives just as the reinforcements arrive. The convoy is reduced to five survivors, Toller, Ellen, Ellen’s baby, Trooper Nyles (Ralph Bahnsen), and Trooper Casey (Jeff Cooper). Jess searches the canyon for Willard to enact his revenge. He finds a barely alive Willard. Willard begs for Jess to kill him to end his misery. Jess gives Willard his pistol and leaves. A few seconds later, a single shot echoes through the canyon.

The surviving Apache are disarmed and arrested. The soldiers take the Apache back to their reservation. Chata is allowed a final embrace with his grandson before he leaves with his people. As the new convoy begins to move out, Toller stands by the graves of all the dead soldiers including Scotty’s who was killed during the attack.