A mythic and emotionally charged hero’s journey, “Dune” tells the story of Paul Atreides, a brilliant and gifted young man born into a great destiny beyond his understanding, who must travel to the most dangerous planet in the universe to ensure the future of his family and his people. As malevolent forces explode into conflict over the planet’s exclusive supply of the most precious resource in existence-a commodity capable of unlocking humanity’s greatest potential-only those who can conquer their fear will survive. (Courtesy of Warner Bros. Pictures) 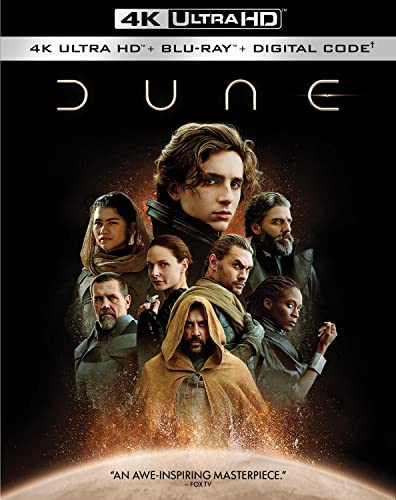 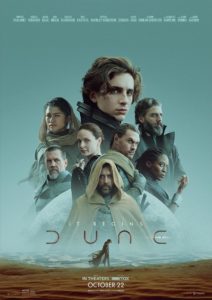 In the future, the universe is ruled by Padishah Emperor Shaddam Corrino IV, and the most important substance in the galaxy is a drug known as mélange or spice. Spice can extend life and expand consciousness. The most important use for spice is to allow the Spacing Guild to fold space, which allows ships to safely travel from one side of the universe to the other.

Duke Leto of House Atreides (Oscar Isaac) is ruler of the ocean planet Caladan. The Emperor assigns Leto and House Atreides to function as fief rulers of Arrakis, a desert planet that is the only source of spice. House Atreides replaces House Harkonnen and its ruler, Baron Vladimir Harkonnen (Stellan Skarsgård), as stewards of Arrakis. The Baron is the sworn enemy of Duke Leto. Leto is apprehensive about the assignment but is aware of the political advantages of controlling the spice production for the galaxy. Additionally, Leto sees an opportunity to form an alliance with Arrakis’ native population, a group of skilled fighters known as the Fremen.

Duke Leto takes his son, Paul Atreides (Timothée Chalamet), and his consort and Paul’s mother, Lady Jessica (Rebecca Ferguson), with him to Arrakis. Jessica is an acolyte of the Bene Gesserit, an exclusive sisterhood whose members possess advanced physical and mental abilities. The Bene Gesserit sisterhood has been involved in a centuries long breeding program to produce a super being known as the Kwisatz Haderach. Paul is a product of the program, although Jessica was ordered to only produce girls. Nevertheless, prior to leaving for Arrakis, the sisterhood wishes to evaluate Paul’s abilities and sends Reverend Mother Gaius Helen Mohiam (Charlotte Rampling) to conduct the test. The test could be lethal to anyone who fails, but to the Reverend Mother’s surprise, Paul passes.

The Atreides family travels to Arrakis with their forces and Leto’s aides, Duncan Idaho (Jason Momoa), Gurney Halleck (Josh Brolin), and the Mentat Thufir Hawat (Stephen McKinley Henderson). Paul is trained in the ways of battle and wisdom by all three men, but he also receives training from Jessica in the Bene Gesserit disciplines. Paul confesses to his mother and Duncan that he is troubled by visions of the future, although Duncan dismisses the young boy’s concerns.

Meanwhile, the Emperor has secretly plotted with House Harkonnen to assassinate Duke Leto. The Emperor supplements the Harkonnen military forces with his own highly trained Sardaukar men to help in staging a coup to retake Arrakis. The Emperor is threatened by the growing popularity of Duke Leto and fears the Attreides’ increasing political influence. Baron Harkonnen hints at a traitor among the Atreides’ court. Aware of the Emperor’s intentions, Reverend Mother Mohiam instructs Baron Harkonnen to spare Paul and Lady Jessica in the planned coup. However, the Baron goes back on his word and tells his vicious nephew, Glossu Rabban (Dave Bautista), to abandon Paul and Jessica in the brutal Arrakis desert.

I must not fear. Fear is the mind-killer. Fear is the little death that brings total obliteration. I will face my fear. I will permit it to pass over me and through me. And when it has gone past, I will turn the inner eye to see its path. Where the fear has gone there will be nothing. Only I will remain. Lady Jessica (Rebecca Ferguson)

Duke Atreides and his family arrive on Arrakis to grand fanfare. They learn from Duncan that Arrakis is a planet where there is never any rain and is populated by gigantic sandworms. Duke Leto meets the leader of the Fremen tribe at Sietch Tabr, Stilgar (Javier Bardem), and holds out hope of a mutually beneficial relationship. The Fremen believe in a prophecy that says a messiah will lead them to freedom, and many of them believe Paul to be that messiah. After scouting the planet for several weeks, Duncan informs Duke Leto that the Fremen are numerous and could be powerful allies for them in a conflict with the Harkonnens.

Duke Leto works to build an alliance with the desert dwellers, but before he can accomplish it, the Harkonnens launch their attack. The Harkonnens’ traitor within House Atreides is Dr. Wellington Yueh (Chang Chen), Leto’s personal physician. Yueh disables the defensive shields around the compound and sonic weapons the soldiers use for defense. This allows Harkonnen forces to catch House Atreides nearly defenseless. Yueh also incapacitates Leto and places a hollow tooth into the Duke’s mouth which will allow the Duke to get close enough to the Baron to kill him with poison gas from his tooth. Yueh apologizes for his betrayal and swears that he will protect Lady Jessica and Paul. Yueh’s purpose for his betrayal is to kill Baron Harkonnen, the man who killed Yueh’s wife.

Leto is captured, and Gurney is believed dead. Duncan escapes the initial attack and goes in search of Paul and Lady Jessica. Nearly all of House Atreides is wiped out. Lady Jessica and Paul are bound and sent out to the deep desert to be left for dead, so their bodies will never be found. However, they escape their captives and with the assistance of Yueh, they are able to survive the desert with survival suits. The Baron has Yueh killed, and Leto is killed in the failed assassination attempt on Baron Harkonnen.

The coup is successful and the Baron hands over command of Arrakis to Rabban. He orders Rabban to sell spice reserves and restart production to recover the cost of the coup. Duncan joins with Dr. Liet-Kynes (Sharon Duncan-Brewster), an Imperial ecologist and judge of the change of Arrakis. The two of them locate and save Paul and Lady Jessica in the desert. The foursome heads to an old research station, but they are quickly attacked by Sardaukar forces. Duncan, Dr. Liet-Kynes, and several Fremen are killed, but Paul and Lady Jessica escape in an Arrakis flying craft. They crash in the deep desert but manage to survive using their Fremen desert suits.

Paul and Lady Jessica encounter a Fremen hunting party led by Stilgar. Among the group is a beautiful woman named Chani (Zendaya), a person that Paul has seen repeatedly in his visions. Stilgar is willing to accept the two into the tribe, but Fremen warrior Jamis (Babs Olusanmokun) protests and challenges Lady Jessica. Paul volunteers to function as his mother’s champion in a battle to the death and kills Jamis. Against Jessica’s wishes, Paul insists on joining the Fremen to fulfill his father’s goal of bringing peace to Arrakis. As the film ends, Paul discovers one of the Fremen’s secrets, that they ride the giant sandworms as a form of transportation around the planet.