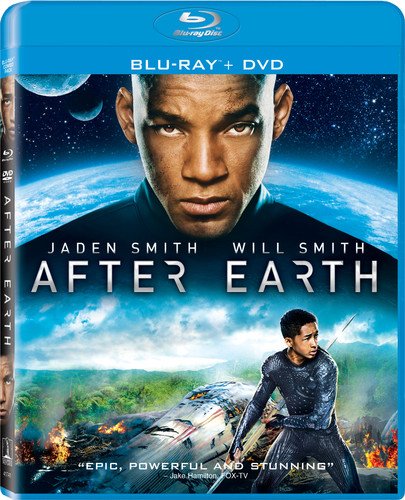 Sony Pictures Home Entertainment has announced the addition of the sci-fi action film  After Earth to their upcoming slate of Blu-ray releases. The film stars the father and son duo of Will Smith and Jaden Smith. After Earth is directed by M. Night Shyamalan and is based on a story that he wrote with Stephan Gaghan and Gary Whitta. The Blu-ray combo pack is currently available for pre-order online and will be available in stores everywhere beginning on October 8th.

In the film, humanity abandoned Earth over a millennia ago, in the interim it has reverted to an almost primordial jungle state. A crash landing leaves teenager Kitai Raige (Jaden Smith) and his legendary father Cypher (Will Smith) stranded on Earth. With Cypher critically injured, Kitai must embark on a perilous journey to signal for help, facing uncharted terrain, evolved animal species that now rule the planet, and an unstoppable alien creature that escaped during the crash. Father and son must learn to work together and trust one another if they want any chance of returning home.

The film was released in May of this years and has grossed over $243 million in worldwide box office to date.

The After Earth Blu-ray will include several special features, including:

Disclaimer: Affiliate links are contained in this post. This means when you click a link, and purchase an item, Movie House Memories will receive an affiliate commission. Advertisers and Affiliate Partnerships do not influence our content. See our Terms of Use about the inclusion of affiliate links on this site for more information.
September 28, 2013
1 minute read
Show More
Back to top button
Close
Close