After a violent grifter gains the trust of a lonely single mother with a mentally handicapped son, he cons her into letting him live with her. On Easter Sunday, while she’s at work, the man invites his child-molesting buddy over to abuse the child. However, a masked Easter Bunny soon arrives and begins a killing spree which takes out home intruders, prostitutes, and anyone who would wrong the young boy. 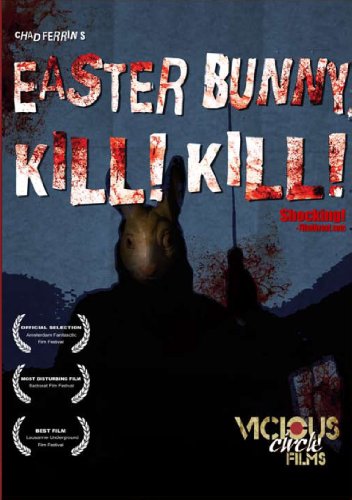 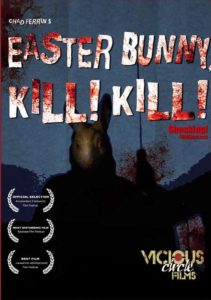 Our film begins on Easter Eve with a convenience store robbery. A man wearing a plastic Easter Bunny mask holds the clerk (Jeff Sisson) at bay with a shotgun. After taking all his money, the robber puts the barrel of the gun in the clerk’s mouth and pulls the trigger. He then steals a chocolate Easter Bunny and a bottle of wine before heading out.

We next meet a lonely single mother named Mindy Peters (Charlotte Marie) who is dying eggs with her 16-year-old son, Nicholas (Ricardo Gray). Nicholas was born with MRCP, and loves the Easter Bunny almost as much as his mother.

Mindy tells Nicholas that her new boyfriend, Remington Rashkor (Timothy Muskatell), will soon arrive at her house (which is being remodeled) and Nicholas will meet him for the first time.

When Remington shows up, he’s still wearing the bunny mask from the robbery and holding the wine and chocolate bunny he took. Remington doesn’t know Nicholas is special and the two immediately dislike each other.

When Mindy is in the kitchen, Remington gives Nicholas the chocolate bunny and tells him there’s blood on it because a bad boy hurt the Easter Bunny. The story freaks Nicholas out, and he runs off to the kitchen to tell his mom. She brushes him off because she really likes Remington and tell Nicholas to take out the trash. Outside, Nicholas wishes the Easter Bunny would hurt bad people.

Just then, a disfigured, homeless man (Trent Haaga) shows up asking for bottles and cans. Nicholas gives him what he has, and the man returns the favor with a gift of his own; a rabbit he says is the one and only Easter Bunny.

Nicholas already hates his mom’s new boyfriend, and he decides to keep his pet rabbit a secret from them both until his daddy returns. Unfortunately for Nicholas, his father died a decade ago when he was six. Back in the living room, Remington asks to move in with Mindy, and she agrees.

The next day is Easter Sunday, and Remington finds himself alone with Nicholas, who’s busy ignoring him. Not knowing where Mindy’s at, Remington goes looking for her. He finds her outside arguing with the man remodeling her house, Jorge (Jose I. Lopez), and his wife Lupe (Marina Blumenthal) about the way he talks in front of her son. She wants him to leave, but he won’t leave. Remington walks out and kicks him off the property.

Mindy has to work a double shift at the hospital, so Remington agrees to watch Nicholas for the day. As soon as she leaves, Remington calls up his handicapped pedophile pal, Ray Mann (David Z. Stamp) to see if he’s up for molesting Nicholas in exchange for money and drugs. Remington hangs up and then threatens Nicholas. He lays down the new house rules and orders him not to tell his mother a thing.

When Ray arrives later that night, Remington is getting ready to head out to find himself some hookers. Remington takes coke from Ray and then heads out. Ray heads to Nicholas’ room to drug and rape the boy, but instead finds someone wearing an Easter Bunny mask under the bed. The Easter Bunny (Wolf Dangler) stabs Ray in the eye with a kitchen knife and then uses a drill to finish him off; lots of blood everywhere.

As the Easter Bunny drags Ray’s body off, we cut to Remington on the prowl for hookers. He picks up two prostitutes named Candy (Kele Ward) and Brooke (Amy Szychowski), does lines of coke off their tits before driving the girls back to Mindy’s place.

Meanwhile, Jorge has returned to Mindy’s with Lupe and a tough guy named Jesus (Ernesto Redarta) to pick up his tools. Once inside, Jorge decides to take a dump, while Jesus looks around the house. The Easter Bunny shows up and hits Jesus in the head a number of times with a hammer until he doesn’t move anymore; more blood everywhere.

Jorge finishes his poop and finds his tools. While get goes through them, Lupe calls him from inside Jorge’s van. While she tells him to hurry up, the disfigured homeless man shows up begging for change. As she hangs up with Jorge, the homeless man attacks her.

Back in the house, Jorge stumbles on Ray’s dead body. He panics as the Easter Bunny shows up and uses a circular saw to disembowel him; way more blood everywhere.

Remington now returns home with his whores. With the electricity off, Remington picks up a flashlight and goes looking for the fuse box. The girls go looking for the bathroom, and as Brooke pees, Jesus grabs Candy and begins strangling her. The Easter Bunny shows up and grabs Brooke while she sits on the toilet.

By now, Remington has found the electrical box and turned on the lights. As he heads inside, he finds Jesus still strangling Candy. He hits Jesus with the flashlight until he dies. Remington then goes looking for Brooke only to find her unconscious in the bathroom. They take her to the living room where she comes to.

Candy goes to the kitchen to get Brooke some water and the Easter Bunny shows up. He impales Candy through the mouth with a broomstick handle; the whore chokes to death on it… minimal blood.

The Easter Bunny then picks up some broken glass off the floor and finds Brooke alone in the living room now that Remington’s off looking for Nicholas. The Easter Bunny stabs Brooke in the jugular with the glass; shit-ton of blood.

We next see Remington standing outside Nicholas locked room, screaming. Remington breaks down the door to find Ray’s dead body. Freaked out, he runs to the front door, but he stops when he spots the Easter Bunny still stabbing Brooke in the living room. The Easter Bunny turns around and slits Remington’s throat in one swoop.

As blood gushes out of his neck, we see the Easter Bunny without his mask, and find he’s actually Mindy. She calls out to Nicholas so that he can witness Remington’s suffering before he dies. She lectures Remington as he bleeds to death, “I hid, and watched, and I saw how you treated Nicholas. I heard every venomous word that spewed through your deceitful mouth. Until I ended it; just like his father.”

We then see a flashback where a decade ago, Mindy set her abusive husband, Donald, on fire because he thought Nicholas was a burden and needed to be put out of his misery.

We return back to the present where Remington bleeds to death. The homeless man knocks on the front door and enters the home with Lupe’s head in a bag. We learn he’s actually Donald, and he’s a changed man. He asks Mindy for forgiveness. As the three embrace, Donald says, “Now, what do you say we clean up these dead bodies, and start a family, huh?”