On a secluded island in the South Seas, a group of castaways stumble upon a paramilitary organization whose nefarious nuclear activities threaten the world at large—and set the stage for kaiju clashes involving Godzilla, Mothra, and the giant crustacean Ebirah. 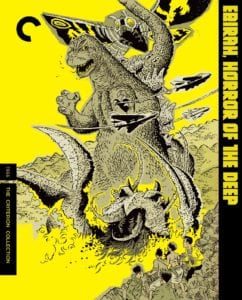 After a 27 passenger fishing boat goes missing in the South Sea, Ryota sets out to find his older brother, Yata. Ryota attends a dance contest in an attempt to win a yacht that he will use to hunt for his brother. Ryota meets two young men, Nita and Ichino, at the dance contest, who offer to drive Ryota to a local marina, where he can see all kinds of yachts. While trespassing on a docked ship, the three lads encounter Yoshimura, a bank robber who is hiding out on the vessel. Unbeknownst to Yoshimura, Nita, and Ichino, Ryota sets the yacht on a course for the missing fishing boat.

During their journey, the quartet encounters a massive storm and a GIANT LOBSTER CLAW, which destroys their stolen ship. Fortunately, they all survive the attacks, only to wash ashore on the Lechti Island. While climbing a mountainside in search for food, they find a large sword and spot a boat docking on the island, near a very well-guarded base. The boat delivers slaves from the nearby Infant Island to the terrorist organization, Red Bamboo, and picks up barrels of a yellow substance called X-1. A few of the island slaves attempt to escape from Lechti Island on a small row boat, but the GIANT RED LOBSTER, known as EBIRAH, crushes the boat and skewers the escapees.

The four yacht survivors encounter an escaped slave girl, Daiyo, who educates them on the Red Bamboo’s operations. The terrorists are using the Infant Island slaves to produce a yellow liquid from a local fruit, which repels Ebirah from the Red Bamboo’s transport ships. Meanwhile, the scientists on the base are creating an atomic weapon. Daiyo explains that all Infant Islanders are praying to awaken Mothra, who they want help free the slaves. She eventually leads the group to a cave hideout, where the group discovers a hibernating Godzilla.

The group breaks into the Red Bamboo’s laboratories in an attempt to free the slaves and search for Ryota’s brother. However, the plan backfires with Ichino being captured and Ryota being accidentally shipped off to the Infant Island via a rogue weather balloon. Fortunately, Ryota was able to find Yata on the Infant Island, allowing the brothers and the islanders to work together in forming a plan to stop the Red Bamboo. The brothers returned to Lechti Island to help the slaves build a large net. Meanwhile, Daiyo, Yoshimura, and Nita use their sword as a conductor during an electrical storm, waking up Godzilla. Godzilla immediately gets into a brief battle with Ebirah. After Ebrirah retreats into the sea, Godzilla goes on the prowl, destroying the Red Bamboo base.

While destroying the base, Godzilla is attacked by a giant condor and Red Bamboo fighter jets. The King of Monsters easily disposes of all the winged menaces, and then continues to destroy the terrorist base. However, he accidentally sets off a timer that will cause the base to self-destruct via an atomic weapon. As Godzilla continues his rampage, the slaves are able to get their net built and patiently wait for a woken Mothra to arrive. Godzilla encounters Ebirah and they begin their ultimate clash of titans. During their battle, Godzilla is able to rip both claws off of the red lobster and begins playing with them, while Ebirah retreats back into the sea for good.

Shortly after his victory over the lobster king, Godzilla engages in a battle with his former foe and partner, Mothra. The monsters exchange offense until Mothra puts distance between the two, then flies off to pick of the net full of detainees. As Mothra soars towards the Infant Island, Godzilla safely jumps back into the sea just before the atomic weapon explode, destroying island.

Ultimately, we learn that the King of Monsters will live to fight another day. Who will he battle next? We will have to wait and see.