Adam Sandler voices three characters in this unusual holiday film. Davey Stone is the Dukesberry troublemaker who has spent the last twenty years drinking and committing various small crimes. After his most recent crime spree has him facing ten years in prison, Davey is given one more chance to maintain his freedom by volunteering as a referee in the youth basketball league, supervised by Whitey Duvall. Davey also encounters Jennifer, his childhood girlfriend, who has returned to town with her son after her divorce. The culmination of events causes Davey to confront his feelings and choices in life since the untimely death of his parents when he was a child. 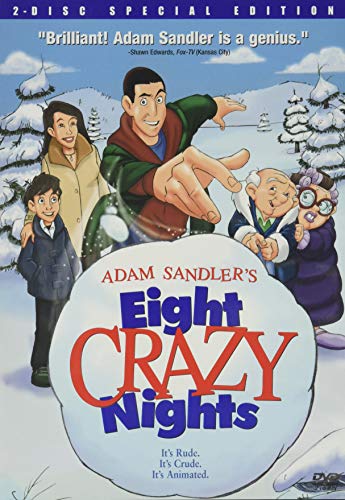 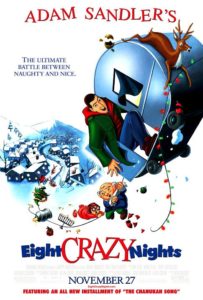 The film takes place in the small fiction town of Dukesberry, New Hampshire. Davey Stone (Adam Sandler) is the town’s troublemaker. The Jewish alcoholic has a long criminal record and is universally hated by everyone in the town. Shortly before Christmas and just as Hannukah is beginning, Davey is arrested for skipping out on a bill at Mr. Chang’s (Rob Schneider) Chinese restaurant, evading police, stealing a snowmobile, and destroying the town’s holiday ice sculptures. At Davey’s sentencing a few days later, Whitey Duvall (Adam Sandler), the town’s 70-year-old volunteer referee for the children’s basketball league, asks the Judge (Norm Crosby) not to send Davey to prison, but to place him in Whitey’s care to complete community service as a referee-in-training in Whitey’s Youth Basketball League, a league that Davey used to play in when he was a child. The Judge grants the request but informs Davey that if he commits any additional crimes, that he will be sentenced to 10 years in prison.

Davey’s first game as a ref is the next day. The game ends in a disaster after Davey begins insulting the players and their parents watching the game in the stands. The negativity of the situation causes Whitey to suffer a grand mal seizure, and the rest of the game is cancelled. Davey is angry at the parents’ taunts at him, so Whitey takes Davey to the local mall to calm him down. They run into Davey’s childhood girlfriend Jennifer Friedman (Jackie Titone) and her young son Benjamin (Austin Stout). Jennifer is recently divorced and has moved back to Dukesberry to rebuild her life. She has taken a job working at the mall Dunkin’ Donuts to make ends meet. Whitey reminds Davey that he lost his chance with Jennifer twenty years earlier, but Davey still holds a candle for his former girlfriend but is too afraid to admit it.

Davey continues to be a troublemaker, which causes his relationship with Whitey to become strained. After Davey steals some peanut brittle from the See’s Candies, Whitey threatens to notify the Judge. Davey blows off the little old man, but Whitey vows that if Davey commits one more crime that he will notify the Judge. Whitey continues to try to reform Davey, but his attempts are met with sarcasm and humiliation.

A few days later, Davey and Whitey are challenged to a basketball game by a couple of gym rats. After Whitey is knocked unconscious, Benjamin takes over as Davey’s teammate. The pair defeat the gym rats in the pickup game, showing that Davey still has his basketball skills, but more importantly, that he can be a mentor to a child. At the conclusion of the game, Davey encourages Benjamin to cuss at the other team, which Jennifer overhears. She scolds Davey for being a poor example to her son and tells him that she does not want Benjamin to become like Davey.

Jennifer’s scolding angers Davey who rants about the conversation all the way back to his trailer. Once at his trailer, Davey finds his home is on fire, having been set a light by one of the defeated gym rats. Davey runs into the burning trailer and saves a Hanukkah card from his parents, who died when he was a child. With no place to live, Davey agrees to stay at Whitey’s house which he shares with his fraternal twin sister Eleanore (Adam Sandler). Eleanore and Whitey have many rules for their house, which frustrate Davey. However, he eventually acclimates to the rules and starts to turn his life around.

However, Whitey inadvertently derails Davey’s positive progress when he brings up the circumstances of Davey’s parent’s death. Twenty years before, Davey’s parents were on their way to one of Davey’s basketball games when a truck skidded on black ice and collided with their car, killing them both. Davey learned of their deaths when police showed up at the end of his game to tell him. Davey spend the rest of his childhood bouncing between foster homes and turning to alcohol and petty crime in a desperate attempt to numb his pain. As a result, Davey destroyed his relationship with all his friends, including Jennifer. The discussion of the painful memories angers Davey, who lashes out and insults both Whitey and Eleanore. Whitey responds to the insults by kicking Davey out of his home.

Davey spends the rest of day binge drinking, and that night he breaks into the closed mall. In his stupor, he imagines the logos of the various stores coming to life and confronting him about his various shortcomings, specifically his inability to grieve over the loss of his parents. Davey finally opens his parents’ Hanukkah card. The card contains a heartfelt message praising Davey for being a good son, and two photographs, one of Davey and Jennifer together and one of Davey’s parents. Davey breaks down crying for the first time and comes to terms with his loss. At that moment, the police show up and arrest him for the break in.

Davey escapes from the police and boards a bus to New York City. The bus breaks down on the outskirts of town when a single thumbtack punctures all eight rear tires. The sudden stop of the bus causes Davey to remember the Miracle of Hanukkah. Davey gets off the bus and runs back to town, intending to find Whitey and make amends with him. Davey finds Whitey at the All-Star Banquet, an annual town celebration in which one member of the community is recognized for positive contributions to Dukesberry. The most distinguished of the awards is the Dukesberry All-Star Patch, which Whitey has wanted for thirty-five years. Unfortunately, Major Dewey (Kevin Nealon) gives the award to someone else, breaking Whitey’s heart. Whitey feels that he is no longer wanted and decides to move to Florida for the rest of his life. Whitey leaves the ceremony with Eleanore.

Davey arrives at the ceremony, risking arrest. Davey argues that Whitey is deserving of the award for his many selfless contributions to the town throughout his life. Davey’s passionate argument causes the townspeople to realize their omission. Davey leads the group to the mall where Whitey and Eleanore are at. The townspeople thank Whitey for his service over the years and the Mayor official grants him the Patch Award. The previous 34 award winners each give Whitey their awards. Davey and Jennifer reconcile, and Whitey goes into the happiest seizure of his life.