Empire Records takes place in 24 hours; except this is day no ordinary day. It’s Rex Manning day, and everything bad that can happen does. One employee gambles away the previous day’s deposit. Female employees fight over older men. Young kids shoplift at the store, and the owner’s greed threatens to turn this fun, independent record store into a corporate grunt. Their boss, Joe Reaves, does his best to keep it all together, and find love at the same time. 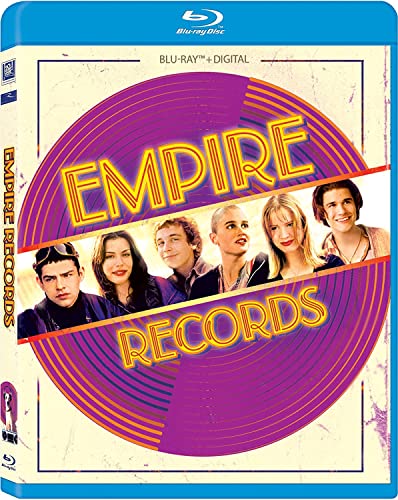 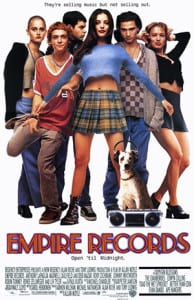 Empire Records, open until midnight, is a small record store set in a small Delaware town…as opposed to the big cities of Delaware that the state is famous for. The film takes place on Saturday, April 8th in a little over a 24 hour time span (even if the lighting in some morning scenes looks like they were filmed in late afternoon…and some afternoon scenes look like they were filmed at sunset).

The film begins the previous Friday night with Empire’s store manager, Joe, allowing his pseudo-adopted son, Lucas, to close the store alone for the first time. All Lucas has to do is count the money twice, stay away from Joe’s drum sticks, Joe’s beer, and Joe’s cigars, BUT while counting the money for the second time…and pounding away on Joe’s desk with Joe’s drumsticks, next to Joe’s open beer bottles, AND smoking Joe’s cigar, Lucas stumbles upon an acetate sheet with the rival and very corporate Music Town facade drawn on it that fits perfectly over another photo of Empire Record’s storefront.

Feeling lucky, Lucas decides to “Damn the Man”, and hightails it to Atlantic City with the $9104 in tow to win enough money to save Empire Records from becoming just another Music Town franchise. Unfortunately for him, he craps out on the second roll of the dice, and loses everything.

Cut to the next day where the morning manager, A.J., and the giggly pothead, Mark arrive to open the store. They find Lucas sleeping on his motorcycle outside, and wake him. Lucas, now talking cryptically like the Chinese guy from the Karate Kid, tells the two he lost money at Atlantic City the previous night, but doesn’t tell them where he got the money from.

A.J. correctly suspects the worst, and Lucas drives off as Joe arrives to help A.J. open the store. As they walk into the store, Joe immediately receives two phone calls; the first from the bank saying there wasn’t a deposit the previous night, and another from Empire Record’s doofus owner, Mitchell, asking where the deposit is. Since Joe doesn’t know anything about the deposit, he stalls the owner with a white lie, and goes looking for it.

But we mustn’t dwell on that. No, not today. We can’t. Not on Rex Manning day!

Rex Manning is an old, fading pop star scheduled to sign autographs at the store that day, and aside from the love-struck Corey, who is looking forward to losing her virginity to Rex, none of the employees of Empire Records wants to be part of his little publicity stunt. Well, maybe Mark, but he’s only excited for the older women that Rex will attract.

Meanwhile, Joe orders A.J. to find Lucas after learning about Lucas’ gambling trip from Mark, but Lucas miraculously appears from the heavens as he leaps from the roof, and lands behind A.J. He then goes to Joe’s office where Joe immediately grounds him, and orders him to stay on the couch until the money appears.

Besides it being Rex Manning day, today’s the day that A.J. is going to profess his love to Corey…at 1:37 PM to be exact, and Joe gives him not so sage advise on how to do it.

Deb arrives to work after a midnight suicide attempt, promptly locks herself in the bathroom, and then shaves her head. Why, because Berko, her boyfriend/coworker/rock musician just broke up with her to marry Liv Tyler’s real life mom. Awkward!

Cut to Lucas’ intimate conversation with Mark out on the sales floor over the nuisances of naming a band, and they spot a teenaged-ginger thief named Warren Beatty, who is busy shoplifting rap, metal, and Whitney Houston CDs. Lucas chases him down, and nabs him in the street as Rex Manning and his assistant, Jane, arrives, but Rex is even less thrilled to be at Empire Records than the staff is at having him, and Rex pulls a Mariah Carey; acting all over-the-hill divan like.

Eventually, he is coaxed to come out to the floor, and sign autographs to homely middle-aged women, apathetic teenaged girls, and fluffy homosexuals that have gathered. While on his lunch break, Corey makes her move on Rex, but is grossed out at his response, and she runs off to the roof; crying. A.J., who is fixing the sign on the roof, then proclaims his love for her while she cries about Rex, (it’s not his fault she decided to hit on Rex at 1:37 PM), but A.J.’s little heart is crushed when she tells him what she just did, and that she only thinks of A.J. as a friend.

By now everyone knows that the prick Mitchell wants to make Empire Records a Music Town, and Joe reveals that he was hoping to buy him out to save the business, but Lucas’ little stunt has ruined everything. To thank Lucas for it, Joe beats his lily-white ass in his office.

As this is going on, Gina does a terrible job consoling Corey over Rex, and Corey ends up calling Gina a whore to her face, and to prove Corey wrong or to spite her, whichever comes first, Gina then seduces Rex, and bangs the toner out of his copy machine.

As you might guess, all hell breaks loose. A.J. jumps Rex. Rex sucker punches A.J. Corey gets in a shouting match with Gina, and Gina reveals Corey’s secret “diet pill” addiction which sends Corey into a tizzy onto the sales floor where she has to be physically restrained.

This calls for a mock funeral for Deb!

At the mock funeral, Lucas reveals that Joe saved him from an orphanage when he was younger, and that he was just trying to repay him by helping him get the money he needed to save Empire Records. Deb then shares a tender moment where she reveals that she tried to kill herself with the lubricated edge of a Lady Bic razor, but before the good times can go any further, Warren shows back up after being hauled off to jail earlier in the movie, but this time he has a gun…full of blanks. Deb, not giving a shit, confronts Warren, and learns that Warren actually just wants a job at Empire Records. Joe hires him as the cops take him away for a second time.

The gang pulls together all the money they have, but it’s not enough to pay back the money that Lucas lost, and Lucas admits to everyone that his idea to save Empire Records is a complete failure. He tells Joe to call Mitchell, but Mark has a moment of inspiration, and runs outside where the local news is live on air reporting the incident with Warren. Mark barges in and tells everyone watching about a late night benefit to save Empire Records. A.J. sells his art. Berko and Gina sing from a top the store’s marquee, and Mark sells beer to people of all ages.

Of course they make more than enough money to pay Mitchell back. As Joe hands him the dough, he quits — vowing to buy his own record store to compete with Music Town, but by this time, Mitchell is over owning the store and offers to sell it to Joe…cheap, which Joe accepts.

The movie ends with Corey telling A.J. that she really does love him, and A.J. reveals that he has decided to quit the store to go to an art school near Harvard where Corey will soon be attending. The two lovebirds kiss on the rooftop under the glow of the Empire Records sign.

As the credits roll, Mark and Eddie sit on the curb and engage in a ridiculous conversation about Henry Rollins being the lead singer for The Misfits, and Primus being a better band. Too many special brownies, boys. Too many.