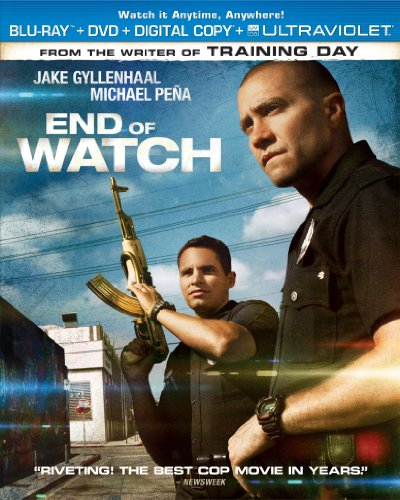 Patrolling the mean streets of south central Los Angeles, cops Taylor (Gyllenhaal) and Zavala (Peña) intercept a car, confiscating money and guns belonging to a local cartel.  But when their investigations draw them ever deeper into the gang’s operations, the two find themselves top of the cartel’s hit list, forcing them to take the fight to their opponents.  The film also stars Natalie Martinez, Frank Grillo, and America Ferrera.

End of Watch was released in the United States in September 2012 and has grossed over $40 million at the box office to date.

The End of Watch Blu-ray will have several special features, including: an audio commentary with writer/director Ayer; deleted scenes; some making-of featurettes; interviews with Gyllenhaal and Peña, and a BAFTA Q&A with Peña and John Lesher.