Ernest P. Worrell is back and this time he has to save Christmas. Ernest is working as a cab driver in Orlando when he picks up a man who claims to be Santa Claus. Santa tells Ernest that he needs to find a local celebrity to hand off the mantle of Santa Claus before 7pm that night. If Santa fails, the magic and legacy of Santa Claus will die and Christmas will come to an end. However, when the man who has chosen to become Santa refuses to take up the responsibility, what will Ernest and the old Santa have to do to save Christmas? 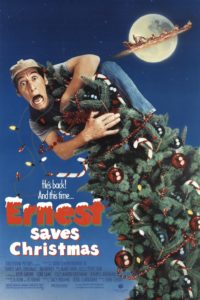 Ernest P. Worrell (Jim Varney) is working as a cab driver in Orlando, Florida on Christmas Eve. He picks up a man who claims to be Santa Claus (Douglas Seale). Santa tells Ernest that he is in town to inform a man named Joe Carruthers (Oliver Clark) that he has been chosen to be the new Santa Claus. Joe is a local celebrity who hosts a long-running children’s program with emphasis on manners and honesty. Ernest is a fan of the show and remembers it fondly.

While they are in route to see Joe, a runaway teenage girl named Harmony Starr (Noelle Parker) jumps into the cab with Santa and Ernest. When they arrive at the destination, Santa has no money to pay for the fare, so Ernest lets Kris Kringle ride for free in the spirit of Christmas. Unfortunately, Ernest’s generosity gets him fired. Before leaving work, Ernest realizes that Santa left his sack in the cab. With no job, Ernest decides to find Santa and return his bag to him.

Meanwhile, Santa finds Joe at the Orlando Children’s Museum. However, when he tries to talk to the celebrity, Joe’s agent Marty Brock (Robert Lesser) interrupts and prevents Santa from talking to Joe. Santa is disappointed, but he becomes truly dismayed when he realizes that his magic sack is missing. Santa tries to explain to Joe that he has been the “Santa Claus” for 100 years and his memory is starting to fail him. Joe is skeptical of the man, and Marty has the police arrest Santa.

Ernest arrives and poses as an employee of the governor with the assistance of Harmony who poses as the governor’s niece. The two work together to free Santa from the jail. Once Santa is freed, he tells Ernest and Harmony that he was handed the job of Santa Claus in 1889 and has enjoyed his time in the job. However, Santa explains that the magic grows weaker as a person grows older. The only way to restore the magic to full strength is to pass it on to someone else.

Santa explains that he has to find Joe and pass the job onto him before 7pm that night. Ernest decides to help Santa and dresses as a snake rancher so he can sneak Santa into a movie studio. At the studio, Marty is trying to convince his client to abandon the children’s show in order for him to land a part in an upcoming horror film called Christmas Slay. In the film, an alien terrorizes children on Christmas Eve, a concept that offends the current Santa Claus who punches the director.

Meanwhile, two holding dock workers named Bobby and Chuck (Billy Byrge and Gailard Sartain) receive several large crates that are marked for release to Helper Elves. The crates contain Santa’s flying reindeer, who are accidentally released. The dock workers seek help from animal control to assist in wrangling the reindeer. Once animal control arrives they determine that they can’t help since the reindeer are walking on the ceiling of the warehouse.

At the same time, Santa finally tracks down Joe at his home. Santa explains that passing the position of Santa Claus over to him is absolutely necessary otherwise the magic will eventually die. Santa also explains that from Orlando, Joe would need to leave by 7pm in order to deliver the presents around the world in time. Joe tells Santa no to his offer to become the new Santa Claus. However, he is later overcome with guilt when the horror film director wants him to use foul language, which Joe refuses to do in front of the children on the set.

Meanwhile, Ernest and Harmony discover that Santa’s sack is magic, and Harmony (whose actual name is Pamela) begins to abuse the magic. She steals the sack from Ernest and tries to run away again. However, her conscience gets the better of her due to it being Christmas Eve and she returns the sack to Ernest and Santa. Ernest meets Santa’s elves, Pyramus and Thisbe (Buddy Douglas and Patty Maloney), at the airport and the three of them retrieve the reindeer from the dock workers and Santa’s sleigh from the holding dock.

They are short on time so Ernest decides to fly the sleigh to the Children’s Museum over the objections of the elves. Ernest has trouble controlling the sleigh and ends up flying all over the sky. Joe sees Ernest flying the sleigh and suddenly believes everything that Santa told him. Joe turns down the role in the horror film and rushes out to find Santa.

Eventually, Joe finds Santa at 6:57pm at the Children’s Museum and tells him that he wants the job. Santa transforms Joe into the new Santa Claus. Joe uses his new magic to make it snow in Orlando. Ernest and the elves arrive with the sleigh and turn it over to the new Santa Claus. Harmony calls her mother and tells her that she has decided to come home. Joe decides to take Harmony as his special helper for his trip around the world and promises to take her home when they are done. Joe also allows Ernest to be the sleigh driver for the night and they begin their journey around the world at 7pm. The old Santa once again resumes his former identity of Seth Applegate. Seth spends Christmas Eve with elderly museum employee named Mary Morrissey (Billie Bird).

The film ends with Bobby and Chuck receiving a large crate with shipping papers marked “E. Bunny”. The two men argue over the spelling of the name when two large rabbit ears suddenly burst through the top of the crate.