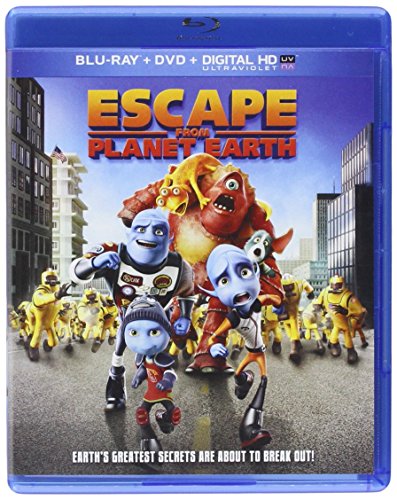 Anchor Bay Entertainment and the Weinstein Company have officially announced the 3D/2D Blu-ray release of Escape from Planet Earth. The film is directed by Cal Brunker from a screenplay by Brunker and Bob Barlen based on a story by Tony Leech and Cory Edwards. Escape from Planet Earth features the voice talents of Jessica Alba, Sarah Jessica Parker, William Shatner, Rob Corddry, Brendan Fraser, Ricky Gervais, George Lopez, Craig Robinson, Sofía Vergara, and Jane Lynch. The animated adventure will be available online and in stores beginning on June 4th.

The film tells the story of Planet Baab’s most celebrated space traveler, Scorch Supernova (Fraser). Scorch is a global hero whose interplanetary exploits are televised for the enjoyment of his ardent fans. With the help of his brainy brother, head of BASA Mission Control, Gary (Corddry), Scorch has become a legend, winning the love of beautiful television reporter Gabby Babblebrock (Vergara) and the devotion of Gary’s hero-worshipping son Kip (Jonathan Morgan Heit). When BASA’s no-nonsense chief, Lena (Alba), intercepts a distress signal from the Dark Planet, a notoriously dangerous world in the far reaches of the universe, Scorch jumps at the chance to attempt the once-in-a-lifetime rescue mission. But Gary tries to discourage his bother from making the trip, knowing that no intergalactic explorer has ever returned from the faraway world (also known as Earth). Scorch is too late, though, to realize that he has been lured into a deadly ambush set by the power-crazed paramilitary leader General Shanker (Shatner). When the trap snaps shut, imprisoning Scorch and some of the most brilliant minds in the universe, Gary rushes to their aid. What he discovers is a plot of interplanetary proportions that only his brains and Scorch’s brawn can stop.

Escape from Planet Earth was released in February of 2013 and grossed over $62 million in worldwide box office.

The Blu-ray Combo Pack includes both 2D and 3D presentations of the film, as well as a DVD and UltraViolet digital copy. The Combo Pack will also include several special features, including: an audio commentary with director Cal Brunker; The Making of Escape from Planet Earth featurette; alternate takes; deleted scenes; and music featurettes from Delta Rae, Owl City, and Cody Simpson.

Disclaimer: Affiliate links are contained in this post. This means when you click a link, and purchase an item, Movie House Memories will receive an affiliate commission. Advertisers and Affiliate Partnerships do not influence our content. See our Terms of Use about the inclusion of affiliate links on this site for more information.
April 29, 2013
2 minutes read
Show More
Back to top button
Close
Close