In 1944, as World War II is nearing its end, a group of Allied prisoners at a German POW camp are forced by their captors to excavate ancient artifacts from a dig site near the Greek town of Athena. The POWs plan to escape and they are assisted by the nearby Greek resistance. The resistance needs the help of the POWs to control the town until the Allied invasion fleet arrives. However, the group also needs to destroy a German controlled monastery that contains a V-2 rocket that could eliminate the incoming invasion fleet. 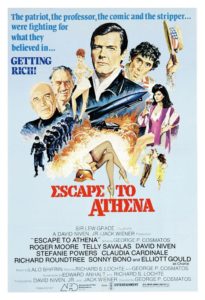 In 1944, as World War II is nearing its end, a group of Allied prisoners at a POW camp are forced by their German captors to excavate ancient artifacts from a dig site near the Greek town of Athena. The dig site and German camp are run by Major Otto Hecht (Roger Moore), a former Austrian antiques dealer. Hecht is secretly sending some of the more valuable pieces to his sister living in Switzerland. Hecht is content with his position as Commandant of the POW camp, but Major Volkmann (Anthony Valentine), the SS Commandant in Athena, is a strict disciplinarian who is not above killing to maintain order over the Greeks. Hecht and Volkmann constantly find themselves in conflict with each other over how Hecht manages his prisoners who frequently attempt to escape. The Allied prisoners are led by Professor Blake (David Niven), an English archeologist who knows that the prisoners have a shelf life to the Germans. The prisoners arrange to keep discovering the same pieces repeatedly for fear of being sent to other camps.

The Greek resistance against the German is led by Zeno (Telly Savalas), a former monk who has set up his base of operations in the local brothel. The brothel is run by Zeno’s girlfriend, Eleana (Claudia Cardinale). Zeno communicates with Allied Headquarters from a hidden radio in the brothel. Zeno is ordered to break the prisoners out of the POW camp to use them to liberate the town and capture the nearby U-boat fueling depot.

The camp receives new two new prisoners, American USO artists Charlie Dane (Elliot Gould) and Dottie Del Mar (Stephanie Powers). Hecht attempts to seduce Dottie, who is willing to do whatever she needs to do to survive. Charlie is placed with the other prisoners and soon joins their plans to escape. The prisoners put on a concert, which includes a striptease by Dottie, to distract the Germans. Zeno’s men and the prisoners manage to capture all the German forces in the camp. Hecht joins forces with the Allies rather than face execution at the hands of Zeno. Hecht and the Allies successfully capture the fuel depot and eliminate Volkmann and his men.

Oh, there’s no such thing as country, major. There are only rivers, mountains, houses, and people. “Country” is an abstraction. Professor Blake (David Niven)

After the mission is completed, Zeno informs everyone that they need to hold the town until the Allied invasion that is scheduled to occur within the next month. Charlie asks Zeno to lead him and two other prisoners, Sergeant Nat Judson (Richard Roundtree) and Italian chef Bruno Rotelli (Sonny Bono), up to a monastery on Mount Athena. Charlie’s plan is to steal the legendary gold plates that are reportedly hidden in the monastery. Zeno refuses and warns Charlie that the treasure belongs to the Greek people. However, Zeno receives word from Allied intelligence that the timetable for the planned invasion of the islands has been moved forward. Zeno is directed to eliminate the German garrison in the monastery so that the Allies can land. Zeno then recruits Charlie, Judson, and Rotelli to assist him in his mission, but he neglects to tell the POWs about the German soldiers in the monastery. Zeno does promise the trio that they can have whatever they find in the monastery.

The four men climb the mountain and reach the cliff overlooking the monastery. Charlie, Judson, and Rotelli are angered to learn that the monastery is occupied by Germans but agree to help Zeno eliminate the base and free the monks. Zeno uses gas to kill most of the soldiers, but the base commander learns that they are under attack and orders a V-2 rocket launch to destroy the incoming invasion fleet. Back at the fueling depot, Hecht, Blake, and Dottie successfully fight off an underwater attempt by German divers to retake the fueling station. Hecht even risks his life to save Dottie who is grateful for the Austrian soldier’s help.

Back at the monastery, Judson knocks out the rocket’s control room with grenades, but one of the German soldiers survives long enough to activate the base’s self-destruct device. As the countdown descends, Judson goes to free the monks while Charlie and Rotelli begin searching the monastery for the treasure. Zeno’s attempts to deactivate the self-destruct but fails. Charlie continues his search up until the last minute, but he only finds tin plates with Hitler’s face on them. All the monks, Zeno, Charlie, Judson, and Rotelli escape the monastery before it blows up.

The Allied invasion is successful in liberating the island. The town holds a victory celebration. Professor Blake learns from one of the freed monks that the gold plates were secretly hidden in the brothel the entire time which explains why Zeno promised Charlie’s group that they could have whatever they found in the monastery. The monk promises Blake that he may examine them before he leaves the island. Hecht, Charlie, Dottie plan to replicate the priceless treasures that Hecht has smuggled back home and then sell them on the black market. Zeno and Eleana begin planning a life away from the brothel after the war.

The final scene cuts to the modern day around the time of the film’s release. The brothel has been turned into a state museum housing the treasures of Mount Athena.