This is no ordinary soccer match. This is war! The battlefield: a stadium in occupied Paris. The armies: German all-stars vs. ragtag Allied POWs. The objective: demonstrate another proof of Aryan superiority. Guess who wins. Better yet, guess who cleverly uses the match as a means of escape. 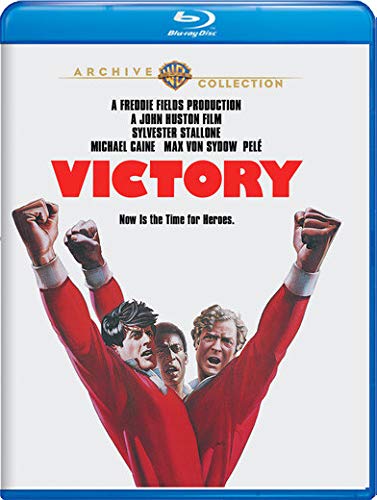 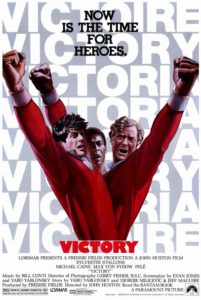 Escape to Victory begins in a German POW camp where many of the Allied prisoners play football to keep their sanity. John Colby (Michael Caine) is a captain in the British Army who was a pre-war professional footballer for West Ham United, and now that he’s a POW, he’s organized something of a football league in the prison camp.

After German soldiers kill a POW trying to escape, the Red Cross arrives to the prison camp to inspect the prisoners and make sure the Germans aren’t breaking any Geneva conventions. One of the accompanying German officers is Major Karl von Steiner (Max von Sydow), an ex-football player himself, recognizes Colby and strikes up a conversation with him.

Von Steiner suggests Colby get his best players in the camp and form a team which will play a German one in an exhibition match in Paris, France. While Colby is hesitant, he agrees to the offer, but when other German officials learn of the game, they decide to hijack the event to use as German propaganda against the Allies.

As Colby holds informal tryouts with the POWs to build a team, another POW, Robert Hatch (Sylvester Stallone)—an American who is serving with the Canadian Army—tries to get on the team, but he has no skill and thus—no luck. Eventually he cons his way on the team as its trainer using the excuse that this new team has switched up the prison’s guard schedule his been learning—thus blocking his attempt to escape. He thinks Colby owes him. Colby begrudgingly agrees to make him trainer.

Meanwhile, Colby’s superior officers sit in their cushy prison barracks and help with any prisoner’s attempt to escape… if it’s a reasonable plan. They get wind of the game and try to convince Colby to use the match as an opportunity to escape. Colby balks at the notion because he doesn’t want to get anyone killed. He’s just trying to keep the men sane until the war ends and then they all can leave.

Even though Hatch weaseled his way on the team, he’s still planing his prison escape he’s been working on. Colby’s superior officers convince Hatch to help them in exchange for his fake passport they made for him. He is to go to Paris where he will make contact with the French Resistance to see if an escape is possible and if they will help him.

Hatch’s escape plan goes off without a hitch and he does make it to Paris and finds the Resistance. At first glance, the Resistance doesn’t think an escape is possible, but when they case the stadium the game will be played in, they figure they can dig an escape tunnel from a nearby sewer to a shower in the player’s locker room. They agree to help and tell Hatch to let the Germans recapture him so he can pass their plan along to the relevant British officers at the prison camp.

Once the Germans recapture Hatch, they of course return him to the same prison camp—as an example so the fellow prisoners that escape is futile—and put him in solitary confinement. Since Colby and his superiors can’t talk to Hatch, they do not know if his trip was successful. All they know is that he has some sort of message from the Resistance because Hatch makes a hand gesture to symbolize the winged cap of Mercury—the messenger of the Gods.

We cut to Paris, France for the big game. The POWs enter the stadium under heavy guard, but that is okay. Down below, the Resistance has a team on schedule with their tunnel. The plan is to break through the showers at halftime. The game begins and things go poorly for the POW team, but it’s more because German authorities have bribed/threatened the referee to call the game in the German’s favor. They can not lose. By halftime, the POW team only has 10 men on the pitch due to injuries—star player, Luis Fernandez (Pelé), being one of them with a broken rib or two—and the score is 4 to 1 in Germany’s favor.

In the POW locker room at halftime, the Resistance breaks through as planned, but the POWs don’t want to leave. They not only think they can win, but they say it’s in everyone’s best interests—including the Parisians—if they beat the Germans.

Hatch is going to go wether they come with him or not, and only Fernandez can convince him they need him. He agrees to stay and the entire team returns back to the pitch—much to the chagrin of the Resistance who dropped everything to dig for these ungrateful people! The POWs manage to make a comeback but are still down by one. Fernandez then decides to play through his pain and returns to the field. He ties the game with his world-famous bicycle kick.

However, all looks lost when the referee calls a last second foul on a POW player, causing a penalty kick. This is especially stinging as one of the POW goals wasn’t allowed after sideline ref called offsides on a POW player. Really the POWs should have been up 5 to 4 here, but they are now facing a loss of 5 to 4.

However, Hatch is able to make that last save (or the German Player purposely telegraphed his shot—you decide) and the game ends in a 4 to 4 tie. The Parisian spectators storm the field and surround the players. They then cover the players with their civilian clothes so they can better blend in and flee from German forces with them. Everyone bursts out of the stadium for a happy ending.