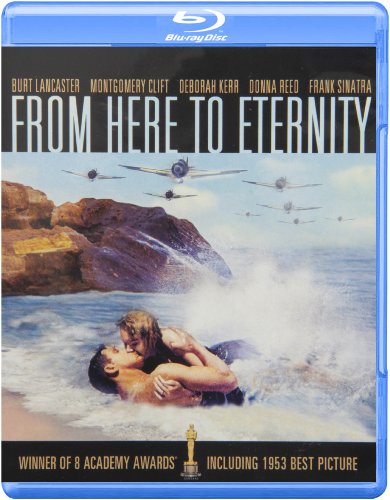 From Here to Eternity [Blu-ray]

Sony Pictures Home Entertainment has announced the addition of the 60th Anniversary Blu-ray release of From Here to Eternity to their upcoming slate of Blu-ray releases. The film was directed by Fred Zinnemann and starred Burt Lancaster, Montgomery Clift, Deborah Kerr, Donna Reed, and Frank Sinatra. The restored 1953 classic is currently available for pre-order online and will be available in stores everywhere on October 1st.

Passion and tragedy collide on a military base as a fateful day in December of 1941 draws near. Private Prewitt (Clift) is newly arrived at the base, and has already fallen foul of his superiors due to his refusal to box on the company team. Given the worst duties as a result, Prewitt is befriended by Angelo Maggio (Sinatra), a young soldier who is himself persecuted by the Italian-hating Sergeant Fatso (Ernest Borgnine). Meanwhile, Sergeant Warden (Lancaster), Prewitt’s superior, treads on dangerous ground when he allows himself to get caught up in affair with an officer’s wife (Kerr).

From Here to Eternity was nominated for 13 Academy Awards and took home eight statuettes, including Best Picture, Best Director, Adapted Screenplay, Supporting Actor (Sinatra), Supporting Actress (Reed), Black-and-White Cinematography, Film Editing, Sound Recording and Best Screenplay. In addition, the film received two Best Actor nominations (Clift and Lancaster) and nominations for Best Actress (Kerr), Black-and-White Costume Design and Scoring. At the time, the film became one of the 10 highest-grossing films of the decade. In 2005, the film came in at #52 on the American Film Institute’s list of “Top 100 films of All Time.”

The From Here To Eternity 60th Anniversary Blu-ray will include several special features, including:

Disclaimer: Affiliate links are contained in this post. This means when you click a link, and purchase an item, Movie House Memories will receive an affiliate commission. Advertisers and Affiliate Partnerships do not influence our content. See our Terms of Use about the inclusion of affiliate links on this site for more information.
September 27, 2013
2 minutes read
Show More
Back to top button
Close
Close