Philo is an easy-going truck driver who also happens to be the best barroom brawler in the San Fernando Valley. After a women he’s interested in suddenly leaves for Denver, Colorado, Philo packs up his brother and pet orangutan and heads after her. However, a pissed off Los Angeles cop and an inept motorcycle gang would like to find him for a bit of good, old-fashioned revenge. 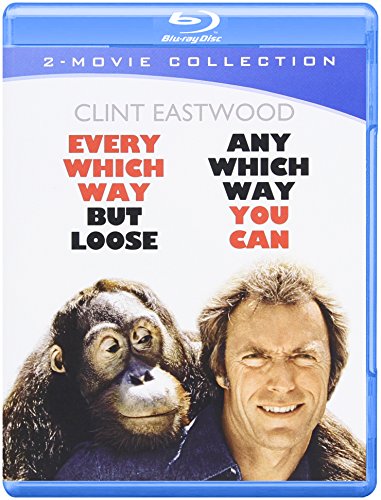 ‘Every Which Way but Loose’ Movie Summary 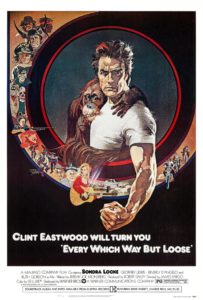 Philo Beddoe (Clint Eastwood) is a San Fernando Valley truck driver who lives in a small house behind his Ma (Ruth Gordon) with his brother, Orville (Geoffrey Lewis) and orangutan named Clyde (Manis). To make ends meet (and because he likes it) Philo spends his off hours beating up people as a bare-knuckle fighter. He is so good that people often compare him to the legendary fighter, Tank Murdock (Walter Barnes).

One night at a local honky-tonk called the Palomino, Philo watches an aspiring country music singer named Lynn Halsey-Taylor (Sondra Locke) perform on stage. Afterwards, he buys her a beer and becomes smitten with her. When her drives her home that night in hopes of getting laid, she says she lives with her boyfriend, Schyler (Bruce Scott) and they need to be quiet if they do it. She’s only with him because he says he will get her the $7000 she needs for her career. Philo decides to call it a night though.

Some days later (or the next day… hard to tell), two members of a motorcycle gang called the Black Widows insult Philo and Clyde at a traffic light and Philo chases after them. He forces them to drop their bikes and flee on a passing train to escape his fists of fury. He then steals the bikes which he repairs and repaints before selling them. That money easily covers the $7000 Lynn needs and he gives it to her in hopes she will ditch her boyfriend for him.

Later that night (or some nights later… still hard to tell), Philo gets in a fight at the Palomino with a guy and his buddies. After he beats them up, he tells the bartender to call the cops, but the bartender informs him that he just beat up the cops. Officer Putnam (Gregory Walcott) is pretty pissed about the whole encounter and wants revenge. His partner, Herb (James McEachin)—or is it Officer Herb—thinks they should just drop it.

The next morning (or some mornings later… I’ve lost track), Philo heads to the trailer park where Lynn lives so she can finally meet Clyde. However, she’s gone. Her trailer’s gone. The money he gave her—all gone. Philo, thinking Schyler made her leave with him, goes to the trailer park manager (Hank Worden) to find out what happened to Lynn. The manager says she left town early that morning before thanking him kindly. Philo figures she’s headed back to Denver, Colorado so he packs up his camper as drives off after her with Orville and Clyde in tow.

Meanwhile, Officer Putnam is still clamoring for revenge. He and Herb do some sleuthing to find Philo and when they learn he’s off to Denver, this smokey takes off after the bandit. Meanwhile, meanwhile, the leader of the Black Widows, Cholla (John Quade), wants a bit of revenge himself. He and the boys do some sleuthing of their own and also learn where Philo is off to and they take chase themselves—but not before Ma pulls a shotgun on the gang ant takes out a number of their bikes.

The next morning, they head to Santa Fe where they are low on cash. Orville gets Philo a fight with a local whom many people compare to Tank Murdock. At the slaughterhouse where the boys fight, Philo whoops the man’s ass. However, the man who booked the fight tries to stiff them the prize money. Echo whips out a gun and fires two bullets into a side of beef to let them know she’s not messing around. The man promptly gives Orville the money. The group then head north to Taos.

At a campsite outside of town, while Orville and Echo fish at a nearby stream, Philo goes for a jog along the quiet highway. Randomly, Lynn drives past him and only stops when she realizes Philo recognized her. Having an itch to scratch, she drives him pound town. While Philo acquiesces to the ride—who are we kidding, he’s in full plow mode—he still wants to kick her boyfriend’s ass for both shooting at him in Los Angeles and stealing his would be girlfriend. Lynn convinces him not to do that before agreeing to meet Clyde in Taos the next day. Philo returns to his campsite to tell Orville the good news. The next day at a restaurant in Taos’ plaza, Philo, Orville, and Echo each lunch as they wait for Lynn. She never shows and so the group heads off to Denver again.

Later, at a lake, while Philo fishes alone, our keystone cops arrive after overhearing Orville and Echo talking about Philo at a local bait shop. The two men spread out with their shotguns in hand to cover more land. Putnam gets the drop on Philo, but as he does, Philo catches a 25-pounder on his line. Putnam gets excites and helps him reel in the fish. Once out of the water, Philo slaps Putnam across the face with the fish and then proceeds to beat him up. He then leaves and finds Herb wandering around. Philo jumps him from a tree. Once he takes Herb out, he pushes the men’s truck into the lake.

Around this time, the Black Widows find Lynn in Georgetown, Colorado and stop her for a chat about Philo. By now, it’s clear she wants nothing to do with him and she helps the gang lure Philo into their trap. When Philo spots her in town, she drives past him as the gang surrounds him. A fight ensues where Philo begins kicking the ass of each gang member. Orville sees the men from down the street and knows there’s trouble. He steals a parked garbage truck and begins lifting the gang’s bikes into it. When the gang sees this, they stop the fight to save their bikes, but it’s too late. Philo beats on a few more men while Echo picks up Orville in the camper as he flees the men running after him. Philo then heads to the camper and the group speeds out of town.

When they make it to Denver, Philo begins calling every honky tonk in town. He finally finds the one Lynn’s performing at that night and goes to her show. Afterwards, he finds her out back talking to another dumb cowboy she’s taking advantage of. He leaves so she and Philo can talk. She tells him that he’s the dumbest man she ever met and that she’s been trying to ditch him since the first night they met. She then begins hitting him while screaming that she hates him. She only stops when she breaks down in tears. Philo never defends himself. A very wimpy Schyler shows up but Philo knowing he’s been played, quietly leaves.

While this is going on, Orville learns that Tank Murdock, who lives in the area, is retiring after one more fight. Orville makes arrangements for Philo to fight him because that is what Philo has always wanted. When Philo arrives from his disastrous meeting with Lynn, the group head to where the fight will take place. There, Philo finds that Tank is old, overweight, and out of shape. He easily bests the man, but as he beats on him, he hears the crowd turn on Tank. In a moment of humility, Philo drops his guard so Tank can get a clean punch in. Philo falls to the ground, and while there, as the crowd cheers Tank on, Philo gives Orville a wink. He throws the fight so that Tank can retire undefeated.

The next day, the group and our villains separately drive back to Los Angeles with their own personal walk of shame… well, most of them shamed anyhow. Philo lost the girl and lost the fight. The Black Widows lost their motorcycles and their pride and the officers lost their truck, their pride, and two weeks vacation time.

However, there were winners. Orville got Echo—the girl so nice she says her name twice. Clyde got that left turn in Albuquerque, and Ma, well Ma finally got her god-damed driver’s license… if she would have only remembered a comb for her wig.