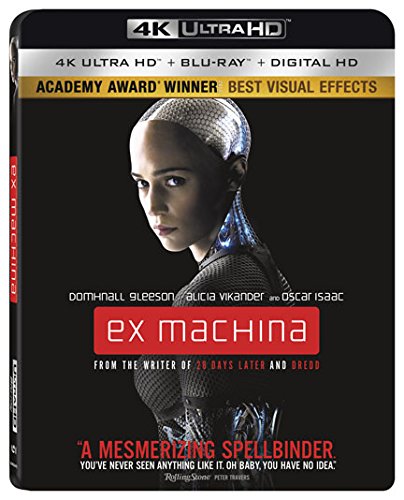 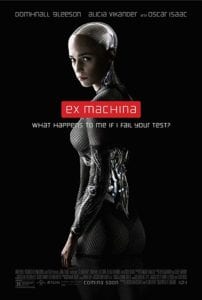 In the film, Ex Machina, Caleb Smith is a programmer for a search engine company named Blue Book. He wins an office contest for a one-week visit to the luxurious home of Nathan Bateman; the company’s CEO. Aside from his servant named Kyoko he lives alone there, and his servant doesn’t even speak English.

Nathan unveils a female humanoid robot he built named Ava using artificial intelligence. Ava has already passed one of his Turing tests, and now he wants Caleb to test her too. Specifically, Nathan want Caleb to decide if Ava is actually conscious and thinking for herself. Also, he’s curious to see how Caleb interacts with a machine that he knows isn’t real.

Although Ava’s face is human, her body is clearly robotic. Nathan has confined her to her own area, so she and Caleb can not physically touch one another. The two begin talking, and Caleb quickly falls for Ava. She seemingly reciprocates those feelings, and tells him her desire to experience the outside world.

Not everything is as it seems

During Caleb’s time there, the complex has brief random power outages. Ava tells Caleb that she’s the reason behind them, and she can temporarily shut down the surveillance system which Nathan uses to monitor them. She uses these times to privately speak to Caleb directly. However, the power outages also trigger the building’s security system which locks all the doors at once. During one such outage, Ava confides in Caleb that Nathan is lying, and he should not trust him.

Caleb is very uncomfortable with Nathan’s excessive drinking and crude behavior towards Kyoko and Ava anyway. He becomes upset that Nathan intends to upgrade Ava; resulting in deletion of her memories and interactions with Caleb. Nathan does not call this an execution. He calls it retirement.

one time, when Nathan drinks until he passes out, Caleb steals his security card. From there, he can access his room and computer where he alters some of Nathan’s code. Then he discovers footage of Nathan with previous failed android models. He also discovers that Kyoko is an android. Now, Caleb begins to question if he’s an android himself. So, he cuts his arm open to make sure. When he bleeds profusely, he’s satisfied that he is human.

At their next meeting, Ava cuts the power again. Caleb tells Ava of Nathans plans to retire her, and she begs him for his help. They form a plan where Caleb will get Nathan drunk, and reprogram the security system to open the doors if a power failure occurs instead of locking them. When Ava cuts the power, Caleb and Ava will leave together.

Nathan is a smart one though. He lets Caleb know that he planted a battery-powered camera to observe Caleb and Ava during a power outage. He reveals Ava is using him to escape and really doesn’t like him.

This was his real test all along…to see if Ava could successfully manipulate Caleb; thus demonstrating her true intelligence. Ava cuts the power. Caleb smugly reveals that he suspected Nathan was watching them, and that he modified the security system the previous day when Nathan was passed out. Nathan watches Ava leave her confined area, and he knocks Caleb out for his stupidity. He then rushes off to stop Ava.

Kyoko and Ava team up to stab and kill Nathan. However, he first manages to disable Kyoko, and damage Ava. Ava repairs herself using parts from earlier androids, and then places their artificial skin over her robotic body to fully appear human.

She leaves Caleb trapped inside the facility; ignoring his pleas for help. She escapes to the outside world via the helicopter meant to take Caleb home; landing in the city where she blends in with the natives.