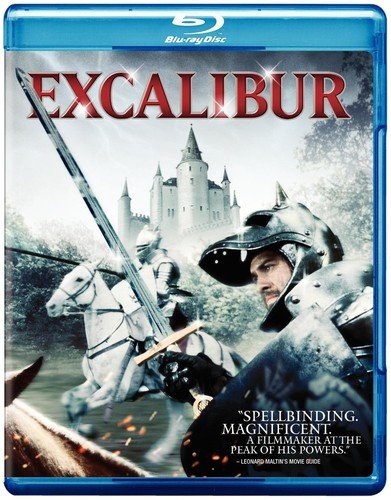 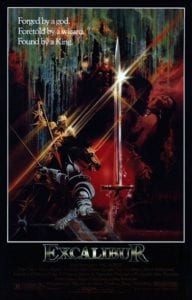 This 1981 film begins with the sorcerer Merlin retrieving the sword, Excalibur, from the Lady of the Lake. He does so at the request of Uther Pendragon who is currently at peace with the Duke of Cornwall.

That peace winds up ruined because Uther has a hard on for the Duke’s wife, Igrayne. He gets Merlin to agree to help him seduce Igrayne, and all Merlin asks in return is to have any child their romp produces. Merlin uses his Charm of Making to transform Uther into the Duke’s spitting image.

The Duke of Cornwall and his army raids Uther’s camp where the Duke is mortally wounded. His daughter, Morgana, senses his death, and when she spots Uther transformed as her father, the ruse doesn’t fool her. However, it does fool Igrayne, and Uther impregnates her.

Nine months pass, and Uther’s son, Arthur, is born. Per his and Merlin’s deal, Merlin takes the child. He tries to get Arthur back, but Cornwall’s knights are still near, and they kill him. Before Uther dies, he takes Excalibur and thrusts it deep into a stone. He then exclaims, “Nobody shall wield Excalibur, but me!”

When Merlin hears Uther’s words, he replies, “He who draws the sword from the stone, he shall be king.”

When word spreads throughout the tournament about Arthur’s feat, Merlin returns. He tells the gatherers that Arthur is indeed Uther’s son, and the rightful heir to the throne. While Sir Leondegrance immediately proclaims his allegiance to the new king, no one else accepts Arthur as their new leader. While a debate over it rages on, Merlin takes Arthur into a forest, and tells him he is the rightful king, and that the king and the land are one.

Arthur returns home from an overwhelming day, and falls into a deep, deep sleep. When he wakes up, he finds Sir Uryens and his army laying siege to Leondegrance’s castle, and Arthur goes off to aid him. Arthur defeats Uryens, and he demands Uryens knight him. He hands him Excalibur to do so. While Uryens is tempted to slay Arthur, this little display of faith moves him, and he willingly knights Arthur. This slays Merlin so-to-speak as he never predicted that to happen!

Uryens falls to his knees, and pledges his allegiance to the new king. The others quickly follow suit. It’s here where Arthur first meets Leondegrance’s beautiful daughter, Guinevere, and he falls for the girl. However, Merlin foresees foreboding consequences from this relationship.

More years roll by, and we find an undefeated knight named Lancelot blocking a bridge. He proclaims that none shall pass until a king worthy of his sword defeats him in single combat. Arthur and his knights approach, and Lancelot defeats them. So, Arthur summons Excalibur’s magic to defeat him, but he winds up breaking Excalibur in the process. This use of the sword’s power shames Arthur. He admits he made a mistake, and tosses what’s left of Excalibur into the lake.

The Lady of the Lake soon appears with a newly restored Excalibur, which she gives to Arthur, and then, she revives Lancelot and the other knights. To unify his land, Arthur next creates the Round Table, and builds Camelot with Guinevere as his queen.
Elsewhere, Arthur’s half-sister Morgana (remember her) is Merlin’s apprentice, and she’s still quite bitter towards Arthur. She vows to learn the Charm of Making from Merlin so she can ruin Arthur like his father ruined hers.

Lancelot who has by now fallen in love with Guinevere, stays away from the Round Table so he doesn’t encounter her. When he meets a peasant boy named Perceval, he takes a liking to him, and takes him to Camelot to be his squire.

Also at Camelot is Sir Gawain, and he’s recently come under Morgana’s spell. She has him accuse Guinevere of driving Lancelot away with desire. Now, Lancelot must duel Gawain to defend his and Guinevere’s honor. On the night before the duel, Lancelot has a nightmare where he attacks himself in it. When he wakes, he finds a self-inflicted wound from his own sword. That doesn’t look like it will heal anytime soon.

That morning, Lancelot is late for his duel with Gawain. So Arthur knights Perceval to defend their honor, but Lancelot shows up in time to defeat Gawain. However, he almost dies from the encounter himself. Once Merlin heals him, Lancelot heads out to the forest to fully recover.

By now, Guinevere reciprocates her feelings for Lancelot, and the two make sweet, sweet love amongst the trees. At the same time, Merlin suspects Morgana is trying to trap Arthur, and so he tries to trap her first, and lures her to his little cave in the woods.

When Arthur finds Guinevere and Lancelot naked and asleep together in the forest, he’s heartbroken. He takes Excalibur, and thrusts it into the ground between the two. Since Merlin is magically bound to the land, the sword impales him. Morgana takes this opportunity to trap him in a crystal using the Charm of Making. She then transforms herself into the image of Guinevere, and seduces Arthur. When Lancelot wakes, he sees Excalibur, and runs off in shame at his betrayal. Guinevere just cries.

Morgana soon bears Arthur’s son. Upon his arrival, a famine and sickness strikes Arthur’s land due to a curse brought on from the sibling’s incestuous encounter. Now a broken man, Arthur sends his knights on the quest for the Holy Grail in an attempt to restore his kingdom.

Many of the knights either die in their quest, or fall victim to Morgana’s bewitching. She manages to ensnare Perceval, but he manages to narrowly escape. He then happens upon a decrepit old man sporting a beard and under armor. The man preaches to anyone who will listen that the kingdom fell because of “the sin of Pride”.

Perceval recognizes the old man as Lancelot, and he tries to convince him to come to Arthur’s aid. Lancelot says no, and he and his followers throw Perceval into a river. There, Perceval has a vision of the Grail, and he comes to understand that Arthur and the land are one. Upon answering a little riddle, he receives the Grail where he takes it to Arthur. Arthur then drinks from the cup, and he and the land are reborn.

Arthur heads out to find Guinevere where she now lives at a convent. The two manage to reconcile, and she gives him back Excalibur, which she has kept in safe keeping since that dreadful day.

Now, Arthur turns his attention to Morgana, her son, Mordred, and his armies. Arthur calls out to Merlin, which wakes him from his enchanted slumber. The two have one last conversation before Merlin vanishes forever…like Obi-Wan and Luke.

Merlin then appears before Morgana as a shadow, and tricks her into speaking the Charm of Making. As the incantation produces a mysterious fog from the breath of the dragon, it exhausts Morgana’s remaining magical powers. With no more power to keep her youthful, she rapidly ages to the point of repulsion. When Mordred catches site of his decrepit old mother, he kills her.

Finally, Arthur and Mordred’s armies battle it out. While Arthur’s side benefits greatly from the fog, their numbers are too few, and Mordred’s men get the upper hand. Then, unexpectedly, Lancelot arrives which turns the tide of the battle, but soon he will collapse from that old, self-inflicted wound that never healed. Arthur and Lancelot reconcile just before Lancelot dies on the battlefield.

Mordred arrives, and stabs Arthur with a spear. To get closer to Mordred, Arthur impales himself further until he can take Mordred out with Excalibur. Arthur turns to Perceval to give him his dying wish; for Perceval to throw Excalibur back into the lake, but Perceval refuses as it’s too valuable.

Arthur convinces him to do as he commands as a new king will one day come, and the sword shall return to the land. Perceval obeys his king’s last command, and throws it into the lake where the Lady of the Lake rises to catch it. When Perceval returns, he sees Arthur lying on a ship with three ladies dressed in all white attending to him. The ship sails off into the sunset.