In the ninth film in the main Fast & Furious film series, Dom and Letty are living the quiet life with Dom’s son Brian. However, they are soon called back into action after a plane carrying Mr. Nobody, the evil Cipher, and a mysterious weapon known as Project Aries is shot down in Central America. Things turn even worse for Dom when he realizes that the man seeking to acquire Project Aries is Dom’s estranged brother Jakob. Now, Dom, his sister Mia, and the team must stop Jakob before he can unleash the weapon on the Earth, while Dom must define what it really means to be family. 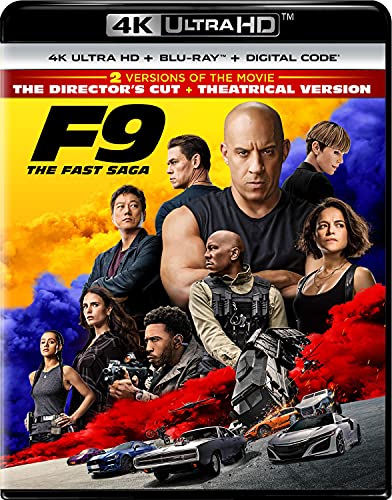 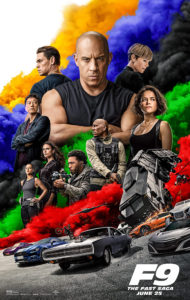 In a flashback to 1989, Jack Toretto (J.D. Pardo) participates in an automobile race with his sons Dom (Vinnie Bennett) and Jakob (Finn Cole) working on his pit crew. Dom is angered by the dirty tactics of rival racer Kenny Linder (Jim Parrack). During the race, Linder’s car clips the senior Toretto’s bumper and sends his car flying. The car crashes and immediately catches fire. Jack is killed. A week later, Dom is arrested for brutally attacking Linder. While in prison, Dom recalls that Jakob was working on his father’s car the day he died and concludes that his brother participated in their father’s death. Once Dom is released from prison, Dom confronts his brother and challenges him to a street race. Dom demands that if he wins, Jakob is to leave town and never return. Dom is successful and a young Jakob sets out on his own.

The film then jumps to 2019, two years after Dom and his team took on the cyberterrorist Cipher (Charlize Theron). Dom is retired from street racing and world traveling and stays home to raise his young son Brian (Isaac and Immanuel Holtane) with his wife Letty Ortiz (Michelle Rodriguez). Dom and Letty receive an unexpected visit from Roman Pearce (Tyrese Gibson), Tej Parker (Chris “Ludacris” Bridges), and Ramsey (Nathalie Emmanuel). The trio inform Dom and Letty that Mr. Nobody’s (Kurt Russell) plane was attacked by unknown rogue agents while in flight after arresting Cipher. The plane crashed in Montequinto, Central America. Letty agrees to help, but Dom insists that he is out of that game. However, he rewatches Mr. Nobody’s last message and realizes that Jakob is involved in the abduction. Dom agrees to help but does not immediately tell everyone of his brother’s involvement.

Dom’s team searches for the plane while avoiding the country’s military. Once they find the plane, they search it and find part of a device named Project Aries. Project Aries gives the capability to its user to hack into any computer-controlled system. The team is ambushed by a private army led by Jakob who steals the piece from Dom and his team. Dom’s team escapes the country and Agent Michael Stasiak (Shea Whigham) assists Dom in setting up a base of operations in a safe house. Dom’s sister Mia (Jordana Brewster) arrives to help after she hears that Jakob is involved. Her husband Brian stays back to watch their children. During their investigation into Project Aries, they learn that their old, deceased friend Han Lue (Sung Kang) was connected to the project. Letty and Mia decide to go to Tokyo to see what they can learn.

At the same time, Jakob meets with his business partner and financier Otto (Thue Ersted Rasmussen). They plan their next step to steal the other half of Project Aries. An imprisoned Cipher informs Jakob that the other half is in Edinburgh. Meanwhile, Dom continues his search for his brother and contacts his father’s former pit crew chief Buddy (Michael Rooker), the person who took Jakob in during his exile. Buddy informs Dom that Jakob is in London.

Simultaneously, Letty and Mia find Han, still alive, in Tokyo. Han has taken on the task of protecting his ward Elle (Anna Sawai). At the same time, Roman and Tej recruit Sean Boswell (Lucas Black), Twinkie (Shad Moss), and Earl Hu (Jason Tobin) to assist the team. The trio are using their combined skills to create a rocket car that they are having trouble perfecting. Back in London, Dom meets with Queenie Magdalene Ellmanson-Shaw (Helen Mirren) who informs Dom of Jakob’s specific location. Dom travels to Otto’s father’s mansion and confronts his brother and Otto. However, Otto uses his father’s diplomatic immunity to have Dom arrested. Dom is freed when the arresting officer is revealed to be Leysa (Cardi B), an old friend of Dom.

Okay, listen up! I want fifty of the best men! I want guns! I want wheels, freaking X-wing fighters– I don’t care! The Millennium Falcon, Chewbacca if you can get ahold of him. Money’s no object. Go. Otto (Thue Ersted Rasmussen)

A short time later, Tej, Roman, and Ramsey meet up with Dom in Edinburgh. At the same time, Jakob is using a huge electromagnet to steal the other half of Project Aries. Roman and Tej discover the truck containing the electromagnet by accident. However, Otto’s men briefly capture them. Ramsey jumps into the truck to chase Otto, despite her inability to drive a car. When she turns on the truck, she accidentally turns on the electromagnet which disarms Otto’s men guarding Roman and Tej. Dom chases after Jakob who is zip-lining through the city. The two fight each other across the rooftops and then down into the streets. Otto moves to intercept Jakob, but his car is run off the road by Ramsey. Ramsey also uses the electromagnet to capture Jakob. The team takes Jakob back to the safe house for questioning.

Otto attacks the safe house and frees Jakob. Jakob reveals that he used the safe house previously when he worked for Mr. Nobody. He also tells Dom that their father was attempting to throw the race where he died to escape his crushing debt. Jakob reveals that their father had instructed a young Jakob to tamper with the car so he would lose. Jakob and Otto kidnap Elle and take the other half of Project Aries. They leave Dom and his team to be executed, however, Dom’s team uses the electromagnet to disarm Otto’s men and escape themselves.

Dom’s team pulls together to stop Otto and Jakob. Otto launches a satellite into space, while Jakob has Elle activate Project Aries. The pair upload Aries to the satellite while driving through Tbilisi in an inconspicuous armored 16-wheeler. Dom jumps into action using their street racing skills to stop the terrorist. Mia and Han work to breach the truck. Otto betrays Jakob and has him thrown off the truck. Dom and Mia save Jakob, and in return, Jakob helps Dom get into the truck. At the same time. Tej and Roman use Sean’s team’s rocket car to enter orbit and destroy the satellite which stops Otto’s upload.

Unbeknownst to Dom’s team and Jakob, Cipher, who is now working with Otto, betrays everyone. She bombs the truck using a drone fighter plane. She nearly kills Dom, but he uses the truck to destroy the drone before Cipher can take a second shot. Cipher, now free from her captivity, escapes again to the criminal underworld. All members of Dom’s team survive with the assistance of Jakob. Dom and Mia reconcile with their brother before he leaves for destinations unknown. Tej and Roman reach the International Space Station and return safely to Earth.

In the closing minutes, Letty and Dom return to Dom’s family home in Los Angeles. They have a big barbecue dinner with entirety of Dom’s team and family. Before they sit down to say grace, Brian O’Connor’s (Paul Walker) pulls up into the driveway indicating that he is rejoining his family off camera.

In the mid-credits scene, Deckard Shaw is seen working out with a punching bag. After he completes his workout, he opens the bag to reveal Otto, who is willing to provide information to Deckard. There is a knock on the door and Deckard answers it. Deckard appears shocked to see an alive Han in the doorway.