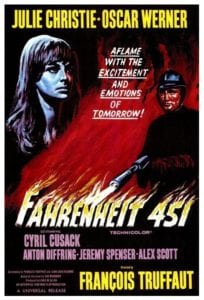 In François Truffaut‘s ‘Fahrenheit 451′, Firemen are government people who find, burn, and destroy all literature they come across without cause or warrant.

Fireman, Guy Montag, meets Clarisse, a 20-year-old schoolteacher who has some taboo views about books. In a conversation with Montag, Clarisse asks him if he ever reads the books he burns. This is a thought that’s never occurred to him, but he starts hiding books in his house, and reads them. His first one is Charles Dickens’ David Copperfield.

Montag’s wife, Linda, spends her whole life in front of her parlor wall watching programs about actors/people she considers more family than her own husband. They always take priority over Montag.

One day on a raid a book collector’s house, the Fire captain lectures Montag about how books make for unhappy people. In fact, they make people feel superior to others which is frowned upon in their oppressive society.

This particular book collector is an old woman who’s an acquaintance of Clarisse. She refuses to leave her house when the Fireman arrive, and they burn her inside it with all her books.

Distraught, Montag returns home to find Linda with her friends. He tells them about the old woman, and claims they don’t know anything about the world around them. This annoys the ladies, and they try to leave. However, Montag stops them. He makes them listen to a passage from a novel. One of the women breaks down in tears over her repressed feelings. The other women leave in disgust over Montag’s cruelty.

Montag goes to bed, and dreams Clarisse was actually the book collector who died. While he sleeps, the Firemen raid Clarisse’s house, but she escapes through the roof.

Montag finds out, and soon breaks into his captain’s office in search of clues to Clarisse’s whereabouts. He’s caught in the act, but not punished. Finally, Montag finds Clarisse, and he helps her get into her seized home. They destroy any evidence that’d lead Firemen to the Book People, a group of people who memorize a book to keep it alive.

This is the last straw for Montag. He resigns from his job, but his captain convinces him to go out on one more job before quitting. It’s Montag’s home. Linda exits the building; scolding Montag over his book obsession. She leaves his fate to the Firemen.

Montag destroys his bedroom and television, and then burns his books. As the captain lectures Montag yet again, he pulls a book out of Montag’s coat. So, Montag sets him on fire with his flamethrower.

He runs off, and avoids capture. He manages to find the Book People, and while there, he sees his staged capture on television. Somewhat free now, Montag selects Edgar Allan Poe’s Tales of Mystery & Imagination to memorize as he becomes one of the Book People.