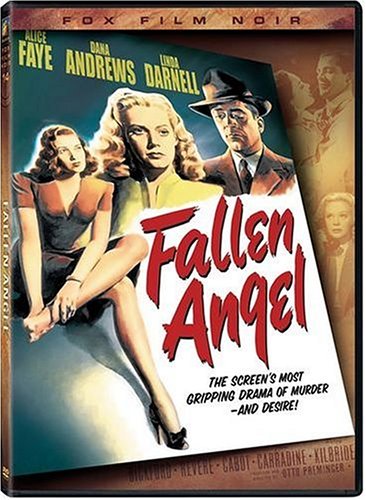 Eric Stanton (Dana Andrews) is a penniless drifter who gets thrown off a bus in the town of Walton because he does not have enough fare to take him all the way to San Francisco. He wanders over to a greasy spoon called Pop’s Eats. There he meets Pop (Percy Kilbride) who’s worried about his waitress named Stella (Linda Darnell) because she missed work for a few days.

Pop is busy talking to the ex-New York cop, Mark Judd (Charles Bickford), who tells him not to worry. The words are barely out of his mouth when Stella walks in. She’s a beautiful woman that gets the attention of all the men in the room, but she’s not terribly impressed with Stanton at first glance.

Stanton’s bad luck takes a turn for the better when he weasels his way into a job with a traveling fortune-teller named Professor Madley (John Carradine). Stanton finds no one in town will buy tickets to the Professor’s “spook act” because the local spinster, Clara Mills (Anne Revere), disapproves of it. Stanton gets to Clara to go only because her younger sister June (Alice Faye) thinks it would be a good idea to attend.

For the show, the Professor channels Abraham Mills who is Clara and June’s deceased father. Using information his assistant Joe Ellis (Olin Howland) dug up, Madley exposes the sisters’ financial problems, and the two ladies leave quite upset.

By now, Stanton’s got a huge crush on Stella, but she makes it clear that she wants a man who is willing to marry her and settle down. For whatever reason, he’s already obsessed with the woman, and he can’t bear to leave town when the Professor heads to San Francisco. He tells Stella that he’d marry her and give her what she wants. However, he’s broke, and she knows it.

To get the money, Stanton swindles the sweet June. He sweet talks her into marriage with plans to divorce her ASAP. Clara, who doesn’t seem to trust Stanton, is unable to prevent their marriage. However, Stanton is so obsessed with Stella, he goes to see her even on his wedding night. Instead of consummating his marriage, he goes to Pop’s Eats as it closes to see Stella. While she’s furious he’s married, he tells her his sinister plan to take June’s money.

The next morning, June tells Stanton that the police came looking for him because Stella’s dead. Mr. Judd is downstairs to ask Stanton some questions. The police have asked him to investigate the murder. The two men head over to Stella’s apartment. Pop is there with a witness and Stella’s last boyfriend named Dave Atkins (Bruce Cabot). He tries to beat a confession out of him, but Atkins has an airtight alibi. Stanton too is a suspect, as Judd saw him arguing with her shortly before her death. So, Judd tells him not to leave town.

Stanton leaves town, and takes June to a seedy hotel room in San Francisco where he tells her his life story of failed get-rich-quick schemes. Even though he’s a washout, June she loves him. The next day when June goes to the bank to withdraw her money, the police take June into custody, and take her back to Walton. After Judd questions her, he releases her to Clara’s custody.

Stanton goes back to Pop’s to find Judd and Pop there. While the men drink their coffee, Stanton reveals he knows Judd bought Stella the watch found at the crime scene, and that he’s there with the police waiting outside.

Judd pulls his gun and then rambles his confession that he killed Stella because he found out she agrees to marry Atkins rather than wait for his wife to give him a divorce. When Judd is distracted enough, Pop wrestles with the gun in his hand. It gun goes off which draws the attention of one of the waiting officers outside. The cop arrests him, and they drive off.

Stanton leaves Pop’s to find June waiting in a car outside. She asks him where to, and he replies, “Home.”