Freeways are clogged. Terror stalks our cities. At shops and restaurants, the customer is seldom right. Pressures of big-city life can anger anyone. But Bill Foster is more than angry. He’s out to get even. Foster abandons his gridlocked car license plate D-FENS on the hottest day of the year and walks straight into an urban nightmare both absurdly funny and shatteringly violent. (Courtesy Warner Bros.) 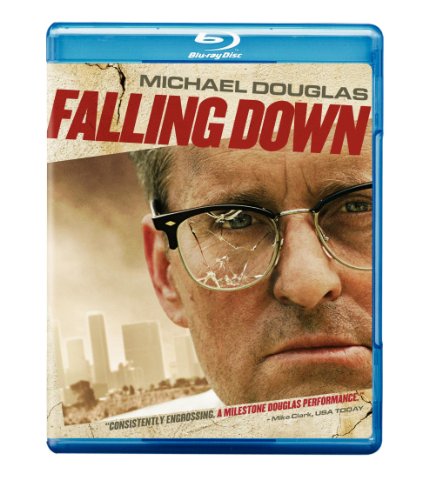 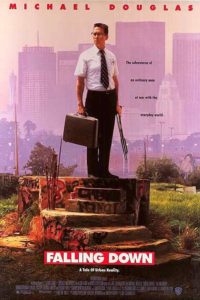 Falling Down is the story of D-Fens, a disgruntled white man in a white shirt and tie in downtown Los Angeles that has had enough with the world around  him and goes on an unscheduled, ever-escalating vigilante rampage through early-90s gangland and run-down L.A. neighborhoods while traveling toward his terrified ex-wife and his six-year-old daughter’s birthday party.

After leaving stand-still traffic while walking away from his vehicle, D-Fens tries making a phone call but doesn’t have enough change for the pay phone. What starts as a moment of argument over pricing a soda in a convenience store, the Asian checker grabs a bat from behind the counter, but D-Fens takes it from him, then proceeds to destroy the store until the prices are dropped to his satisfaction.

Before D-Fens leaves with the bat, he pays for his soda and takes correct change without stealing anything. The checker calls the police and tells retiring detective, Pendergrast, about the robbery that isn’t a robbery. Pendergrast’s overbearing wife wants him home yesterday, and the rest of the cops don’t seem to like Pendergrast much because he’s too calm and not nasty enough. Meanwhile, D-Fens takes a break in gangland unintentionally due to his shoe being broken. Two Hispanic gang members threaten D-Fens with a switchblade and demand his briefcase as a toll for being on their turf. D-Fens grabs his bat, breaks one of the thugs’ arm and chases them off, while picking up their switchblade.

D-Fens finds a phone and calls his ex-wife and passive-aggressively tells her he’s coming to the birthday party, even though there is a restraining order on him. As he is on the phone, the gang thugs and their buddies do a drive-by with a bag full of semi-automatic weapons and narrowly miss D-Fens as they roar off, turning a corner too fast and crash into a wall.

D-Fens calmly walks the direction of the wreck and discovers the incapacitated gang members and their full bag of guns. D-Fens takes an Uzi and tests the sights by shooting one of the gang members in the leg, then walks off, leaving the wreckage behind. Pendergrast starts hearing about a middle-aged white man in a white shirt and tie causing chaos in places where he shouldn’t and begins investigating with his soon-to-be-ex-partner.

As Pendergrast starts putting two-and-two together, D-Fens starts getting angrier and causes bigger and bigger explosions wherever he goes. By the time D-Fens has traveled across town, leaving a trail of explosive breadcrumbs being investigated by the LAPD who don’t believe Pendergrast even though he figures out who D-Fens is and where he’s going. By the time the enraged and fully-armed D-Fens finally shows up in Venice, his ex-wife and little girl have fled toward the pier, where D-Fens runs to intercept her with Pendergrast close behind.

Once on the pier with his family and facing Pendergrast who has arrived just in time to disarm D-Fens and allow the family to escape while he gets the drop on him, D-Fens is faced with his disbelieving reality he has become the bad guy in this story. In one last act of desperation, D-Fens pulls a gun on Pendergrast but is shot in the chest and falls off the pier, dead.

Pendergrast decides not to retire and the world continues to spin with one less disgruntled white guy in a white shirt and tie in the world. Too bad this wasn’t filmed in Mar-A-Lago. And that was “Falling Down”.