Fat Man and Little Boy tells the story of the Manhattan Project. General Leslie Groves is tasked by the government to oversee the project. He recruits physicist Robert Oppenheimer to head the team of scientists. One young scientist, Michael Merriman, questions whether the scientists should be doing what they are doing. The film shows the sacrifices, troubles, and tribulations that those involved in the project had to undertake to usher in the Atomic Age. 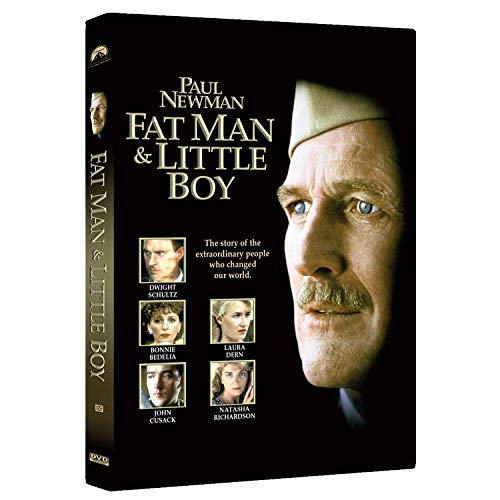 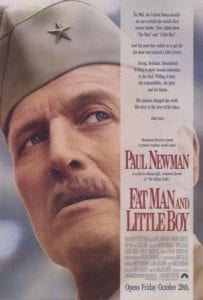 In September 1942, Colonel Leslie Groves (Paul Newman), the head of the United States Army Corps of Engineers, is given a promotion to General and reassigned to lead a top secret project to create an atomic bomb. Groves does not wish to be a part of the project and is skeptical of its success. However, he meets with a scientist in Chicago who not only informs him that the success of the project is possible, but that the Germans have a similar nuclear weapons program.

Groves meets with physicist J. Robert Oppenheimer (Dwight Schultz) in secret to discuss the project. Oppenheimer proposes that they bring a group of scientists together, isolate them, and put them under a situation of creative stress and competition. Each of them working to solve one problem, building an atomic bomb. Oppenheimer states that they all need to report to just one person and proposes himself. Groves likes the idea, but is hesitant due to Oppenheimer’s politics.

Oppenheimer is chosen for the project. He sets up the operation in northern New Mexico on top of a mesa adjacent to a valley called Los Alamos Canyon, northwest of Santa Fe. Groves builds a compound where the scientists will not be allowed to leave. Oppenheimer is allowed to bring his wife, Kitty (Bonnie Bedelia) to the camp. A young physicist named Michael Merriman (John Cusack) joins the project but arrives late to the camp.

Oppenheimer’s group is responsible for building and testing a device. The government gives the scientists nineteen months to build the bomb. Groves and Oppenheimer’s personalities often clash as the two men have drastically different approaches to solving the project’s problems. Groves is worried about security, and Oppenheimer wants his scientists to be able to have free discussion. Oppenheimer also clashes with the other scientists, who often debate whether their personal consciences should enter into the project or whether they should remain purely researchers, with personal feelings set aside.

The military monitors the scientists’ conversations and phone calls. Groves discovers that Oppenheimer is having an affair with a known Communist named Jean Tatlock (Natasha Richardson). Groves sees the affair as an opportunity to gain leverage over the stubborn Oppenheimer. During a testing procedure, a radio sets off a series of explosions ahead of schedule. Merriman runs into the detonation area to save a soldier. He survives relatively unharmed, but he is sent to the camp hospital. There he meets Nurse Kathleen Robinson (Laura Dern) and they begin seeing each other.

Groves eventually orders Oppenheimer to end his relationship with Tatlock. Oppenheimer initially resists the suggestion, but eventually agrees to end the affair. He travels to see her personally rather than ending it over the phone. In the winter of 1944, Groves receives information that the Germans are not close to developing a weapon. However, he hides the information from the scientists so that they continue to feel the pressure to build the bomb quickly. Shortly afterwards, Oppenheimer receives a telegram that Tatlock committed suicide. Oppenheimer feels guilty for Tatlock’s death and retreats into himself despite the project making important advances. Oppenheimer decides to leave the project, but Groves talks him into staying. Soon after, Germany surrenders, but Groves continues to push the scientists to finish the project. The scientists begin to question whether the project needs to be finished since Japan does not have the capability of making an atomic bomb. They question the morality of building the bomb. Others scientists, and some of the military, argue that they should only demonstrate the bomb off shore rather than dropping it on a civilian population in Japan.

One day, Merriman is working in a lab with a radioactive component during an experiment referred to as Tickling the Dragon’s Tail. Merriman is working with little protection and is briefly distracted. He drops a component and retrieves it by hand in order to avoid a disaster. However, he is exposed to a lethal dose of radiation. While he is in the hospital dying painfully and slowly, Nurse Robinson watches the man she has fallen in love slowly fade away and die.

As the project nears completion, the scientists decide to make two separate bomb designs to avoid a single point of failure. One bomb, a large, heavy plutonium bomb that causes implosion using shaped charges (Fat Man), and a thin, less heavy uranium bomb that triggers in a shotgun design (Little Boy). Oppenheimer begins to question his involvement in the project even as Groves continues to push for final testing. The bomb development culminates in a detonation at the Trinity Site in the Alamogordo Desert in New Mexico.
In the post script of the film it is revealed that both Fat Man and Little Boy were successfully dropped on Japan in 1945. Oppenheimer eventually chose not to be involved in the creation of a super atomic bomb in the 1950’s and lost his security clearance. Groves lost control of the development of atomic weapons and left the military.

User Rating: Be the first one !
May 10, 2020
4 minutes read
Show More
Back to top button
Close
Close