A precocious 12 year old hires a hit man to kill Santa Claus after receiving a lump of coal in his stocking. However, this unorthodox Santa is just fighting to save his declining business. 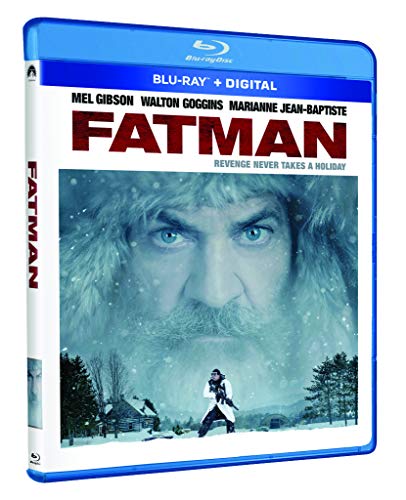 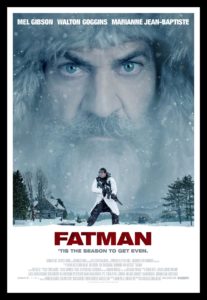 Fatman features Mel Gibson starring in a Mel Gibson movie about Santa Claus. Gibson plays the fat man himself. He and Mrs. Claus are struggling to keep their operation afloat financially. They receive an annual subsidy payment from the US government. But their subsidy payment has been dwindling, since more and more children are only worthy of receiving coal in their stockings. Santa is hoping for a larger payment from Uncle Sam, but it doesn’t come. Instead, some suits from the Department of Defense come to the north pole and offer Santa a contract manufacturing weaponry for the US military.

Meanwhile, a bratty young rich kid named Billy bullies his way through his short life by stealing from his grandmother and hiring a hitman with daddy issues played by Walton Goggins. Billy deservedly receives coal from Santa on Christmas day, and he swears revenge and hires the hitman, named only Skinny Man, to find and assassinate Santa.

Santa returns from his annual gift giving having been shot in the ribs by some kids with a deer rifle. His gunshot wound heals miraculously quickly. Santa reluctantly agrees to the defense contract and begins making weapons with the elves under the watchful eye of the Department of Defense. He comes to peace with his choice, however, when a big fat government check shows up in his PO box.

Skinny Man makes the trek up north to find and kill Santa Claus. He clearly has Santa issues as well, as he spends his hard-earned blood money buying toys made by Santa’s workshop and collecting them. The movie slows down here, and we are given an extended sequence of Skinny Man traveling to find Santa. However, he eventually finds him.

Skinny Man murders his way through the Army guards and leaves a bloody trail through Santa’s workshop. Eventually, they elves call Santa for help, and the shootout we were promised happens outdoors in the north pole. Fatman and Skinny Man unload and shoot each other up. Fatman runs out of ammo after hitting Skinny Man a few times. Wounded and outgunned, Fatman lies helpless as Skinny Man lines one up and shoots Santa right through the eye. Santa falls unconscious, and Mrs. Claus comes out to take a shot at Skinny Man. Skinny Man pursues Mrs. Claus into their home, and wounds her with a shot. However, Mrs. Claus hides and springs a trap on Skinny Man, shooting him dead in her kitchen.

Santa revives, however, and slowly returns to life. He pays Billy a visit in his home as Billy prepares to poison his grandmother to cover up his theft. Fatman gives Billy a stern warning of coming revenge if he doesn’t clean up his act and leaves on his merry way.