Based on W.P. Kinsella’s 1982 novel “Shoeless Joe”, Field of Dreams tells the story of Iowa farmer Ray Kinsella who hears a mysterious voice in his cornfield that tells him to build a baseball field on his farm. Despite the financial repercussions, Ray does, and he soon encounters the mysterious ghost of “Shoeless” Joe Jackson, a disgraced baseball player from the 1919 Black Sox Scandal. Soon, Ray sets off on a cross country trip to “ease his pain”. However, Ray continues to wonder, whose pain is he easing. 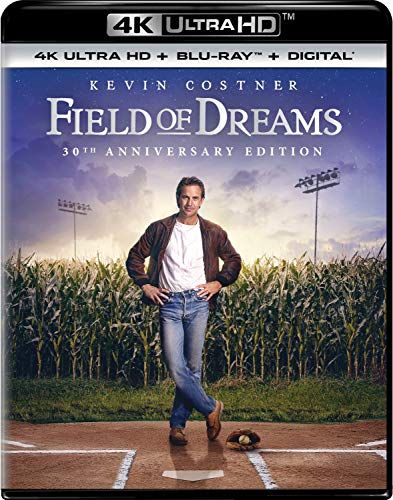 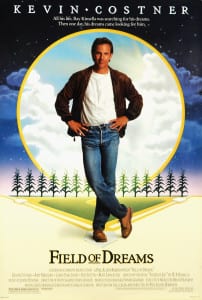 In Dyersville, Iowa, Ray Kinsella (Kevin Costner) lives with his wife Annie (Amy Madigan) and his young daughter Karin (Gaby Hoffmann). The trio live on a corn farm and lead a quiet life. Kinsella is haunted by his falling out with his father John (Dwier Brown) years before who ultimately died before Ray was able to make amends with him. John was a minor league baseball player who never made it to the majors who also idolized the disgraced Chicago White Sox player, the infamous “Shoeless” Joe Jackson (Ray Liotta).

One day, Ray is working in his cornfield when he hears a disembodied voice which whispers, “If you build it, he will come.” Ray sees a ghostly vision of a baseball diamond in the cornfield and Joe Jackson standing in the middle of the field. Ray concludes that he is supposed to build the field so that “Shoeless” Joe can come back to life. The liberal Annie supports Ray’s crazy notion and allows him to plow up their field which severely cuts into the family’s cash crop.

As Ray builds the field, he tells his daughter about “Shoeless” Joe and the infamous 1919 Black Sox Scandal. Ray explains that there was always a question as to whether Joe was involved in throwing the World Series with his teammates since his offensive statistics argue against it. Over the course of several months, nothing happens on the field and Ray and Annie are subjected to town ridicule. However, one night, the ghost of “Shoeless” Joe appears on the field. Joe asks if the field is heaven, and if he can bring others to play on Ray’s field. Ray, Annie, and Karen can see Joe and his fellow players, but Ray is surprised to find that Annie’ brother, Mark (Timothy Busfield) can’t see any of the ghosts. Mark warns Annie and Ray that they are in danger of having their farm foreclosed, leaving them homeless. Not long after, Ray hears the mysterious voice again which tells him to “ease his pain”. But once again, Ray does not know what the voice means.

A few nights later, Ray and Annie attend a PTA meeting where some zealots advocate banning books that they consider to be controversial, including books by Terrance Mann (James Earl Jones). During the meeting, Ray concludes that the voice was referring to Mann. Ray discovers that Mann wrote a short story about baseball where one of the characters was named John Kinsella, the same name as Ray’s father. Ray also discovers an interview where Mann allegedly discusses his childhood dream of playing for the Brooklyn Dodgers.

Ray proposes a plan to visit Mann, but Annie is opposed to it due to the family’s financial crisis. However, when Ray and Annie realize that they had the same dream about Ray and Mann attending a baseball game at Fenway Park, Annie agrees to let Ray go. Ray finds Mann in Boston. Mann has become a recluse since writing his most influential work during the 60’s. Mann chooses to live in solitude and to write computer software. Ray kidnaps the writer and takes him to a Red Sox game. During the game, Ray hears the voice urging him to “go the distance.” He also sees statistics on the scoreboard for Archie “Moonlight” Graham who played in one major league game for the New York Giants in 1922 but never got an at bat. Mann initially denies hearing the voice and seeing the stat, but later confesses to seeing both. Mann decides to join Ray as he decides to drive to Minnesota to talk to Archie Graham.

Once in Minnesota, Ray and Mann learn that Graham became the town’s doctor after leaving baseball and had a highly influential effect on the town. Additionally, they learn that Graham died years before. Disappointed, Ray takes a walk through the town and suddenly finds himself in 1972. He encounters Dr. Graham (Burt Lancaster) taking a walk along the street. Ray offers to take the elderly Dr. Graham back to his farm so that he can get his major league at bat. However, Dr. Graham declines and states that he had a satisfying medical career. Ray and Mann leave Minnesota, and Mann decides to go with Ray back to Iowa to see the baseball field. Along the way, they pick up a hitchhiker who is the young Archie Graham (Frank Whaley) prior to his baseball career. Mann and Ray decide to take the young Graham with them to the field.

On the drive to Iowa, Ray reveals to Mann that his father loved baseball and when he failed to make the majors that he encouraged Ray to take up the game. Ray confesses that after reading one of Mann’s books that he stopped playing catch with his father and became disinterested in baseball. Ray tells Mann that he became estranged from his father after Ray said that he could never respect a man who had a hero who was a criminal, referring to Shoeless Joe. Ray confesses that he knew that Joe was not a criminal, but that he made the statement to hurt his father. Ray admits that his greatest regret is that his father died before he could ever make amends for his hurtful words. Mann tells Ray that the field and his encounters with Joe are his penance for hurting his father.

When Ray, Mann, and Graham arrive at the farm, they are surprised to see that the field has two complete teams playing a full baseball game. Joe explains to Ray that they invited other former players, except for Ty Cobb which none of them liked. Joe invites Graham to play with them. Graham finally gets his major league at bat and tips his cap to Ray for making his dream come true.

The next day, Mark returns to the farm and demands that Ray sell the farm or that his bank will foreclose on him. Karin surprises everyone when she insists that people will come to watch the ghost game and will gladly pay to see it. Mann suddenly agrees and insists that people will come to relive their childhood innocence. Ray and Mark argue and scuffle, and Karin is knocked off the bleachers. She stops breathing, and the young Graham runs from the field and crosses a mysterious barrier. The young Graham becomes the elder Dr. Graham and quickly determines that Karin is choking and removes the blockage, which is a bite of hot dog. Ray apologizes to Dr. Graham for him not being able to return to the game as his younger self, but Dr. Graham assures him that he has no regrets. After receiving a compliment from Joe, Dr. Graham walks into the cornfield and disappears. In the aftermath, Mark is suddenly able to see the ghosts and urges Ray to keep the farm.

The ghosts decide to call it a day and begin to head back into the cornfield. Joe invites Mann to come with them. Ray becomes angry that he has not been invited, but Mann calms him by telling him that he did do the interview about baseball that he had previously denied doing. Mann also promises to write about his experiences in the cornfield when he returns. As Mann disappears, Joe smiles at Ray and states that “if you build it, he will come”. He then glances towards home plate where the catcher removes his mask, revealing himself to be Ray’s young father. Ray suddenly realizes that he has not been tasked with easing Joe’s pain, but his father’s. Additionally, Ray realizes that it has been Joe speaking to him the entire time.

Ray introduces his family to his father, without referring to him as his father. Ray and John talk, finally accomplishing the thing that they did not get a chance to do in life. As John begins to head into the cornfield, Ray calls out to him as Dad and asks him if he wants to have a catch. John happily accepts and in the distance hundreds of cars are seen approaching the field, fulfilling Karen and Mann’s promise that people will come.