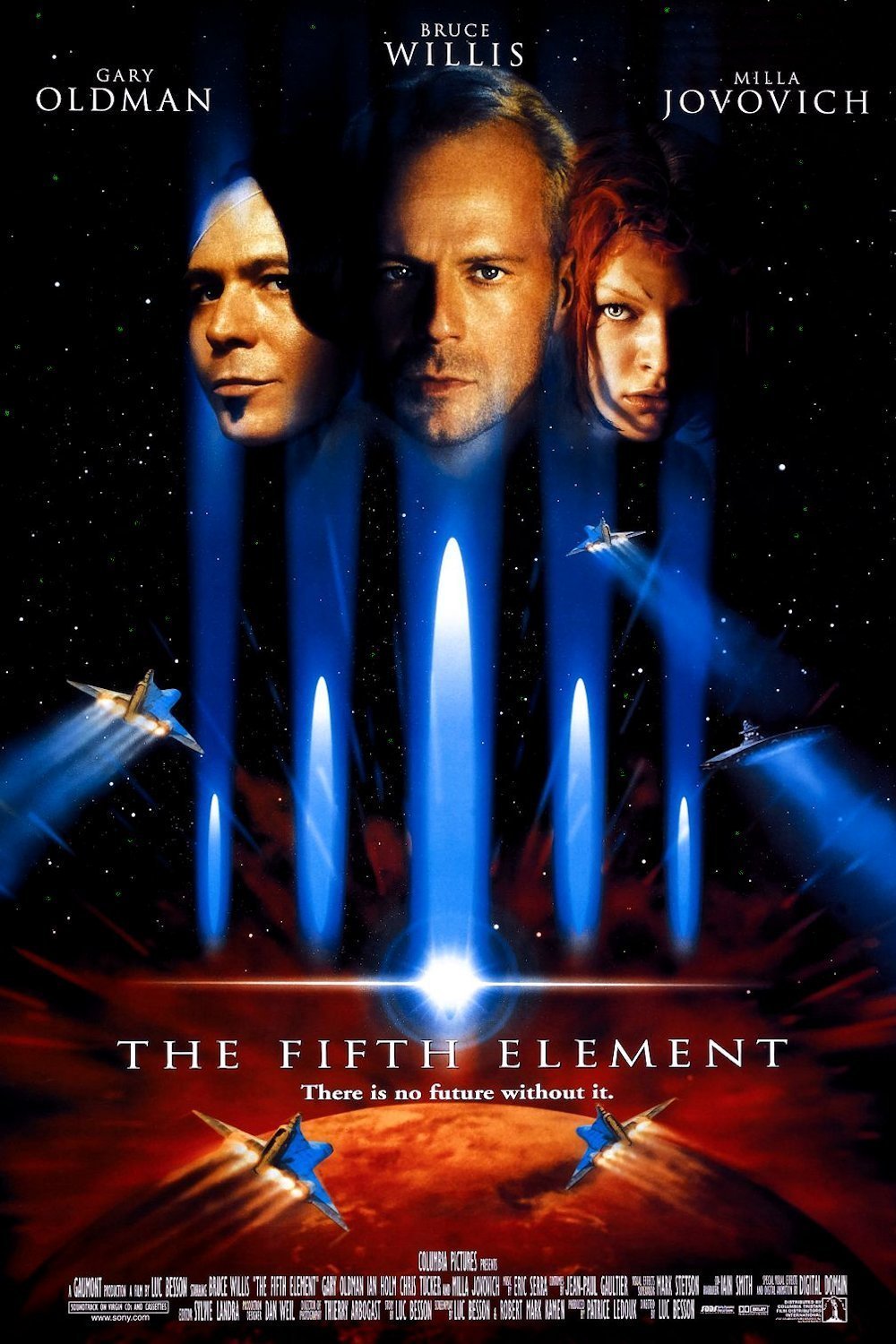 On May 9, 1997, Gaumont Buena Vista International and Columbia Pictures brought us one of the most delightfully brilliant, visually stunning, and dare I say—wacky films of the 1990s; The Fifth Element or as they say in France, Le Cinquième Élément. It’s a story Luc Besson began to write at the age of 16 which fully explains Leeloo’s character. What 16-year-old boy doesn’t fantasize about the perfect woman literally falling from the sky and into his arms? Heck, what man in general wouldn’t fantasize about that?

Bruce Willis, Gary Oldman, Ian Holm, Chris Tucker, and Milla Jovovich star in this sci-fi classic. Bruce’s performance is what you’d expect from him at this time…a bit more Butch Coolidge from Pulp Fiction than John McClane from Die Hard. Gary Oldman, as the evil Zorg, is the perfect asshole baddie. This is probably my favorite performance of his, but then I’m not a big Harry Potter or Dark Knight fan. Chris Tucker as Ruby Rhod seems to be a “love him” or “hate him” character. Is he an outright obnoxious character that chews up scenery in the film, or the epitome of what we now call a reality tv star? For me, I think his character fits well with the absurdity of the situation he finds himself in, but he does get to be a bit much. As for Milla Jovovich, well she’s perfect—genetically of course.

For those who haven’t seen the film, The Fifth Element is set in the year 2263, and an evil mass has appeared in the depths of space with the intentions of destroying the entire Universe. The Mondoshawans are an alien race with a weapon capable of destroying that great evil. The weapon consists for four stones: Earth, Wind, Fire, and Water, and a Fifth Element which takes a human form. The Mondoshawans have a contact on Earth named Vito Cornelius who informs the President of the Federated Territories of the weapon.

The Mondoshawans attempt to return to Earth to defend the Universe, but the evil Zorg’s cronies, the Mangalores, kill them before they can land. The evil mass, known as Mister Shadow, hired Zorg to retrieve the stones, but they are not part of the shipwreck’s remains.

However, a group of scientists find a hand in the wreckage, and use its DNA to reconstruct the human in a New York City laboratory. That human is Leeloo, and she quickly escapes the lab, jumps off the building that holds it, and she promptly lands in Korben Dallas’ cab. Luckily for her, Korben is a former major in the special forces. He takes Leeloo to Vito Cornelius, and the adventure to save the Universe begins.

The Fifth Element is a jumbled mixture of visual eye candy, enjoyable sci-fi, and comedic wackiness that all somehow fits to create a fun, fun film. Don’t get me wrong. The Fifth Element doesn’t have a deep plot, and you can tell a 16-year-old boy wrote it. The story is lacking in places, but the visuals are quite unique and full of creativity. The scene with the towering Diva Plavalaguna singing an aria in all her blue glory with a blue planet is one scene that sticks out in particular.

The film is just over two hours long, and it goes by very quick, but the film could use a bit of editing to make it that much more enjoyable. I could have used less of Korben’s mom and even less of Ruby Rhod’s screaming, but in the end, the is a fun movie whose visuals still draw you in (even if some of the computer graphics look a bit dated). This is a film to watch if you haven’t seen it yet, and a movie to buy it if you don’t own it. The Fifth Element is a great example of a mid-90’s sci-fi film. Add this one to your guilty pleasures list.