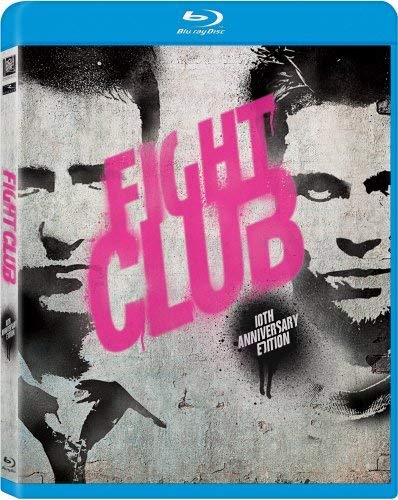 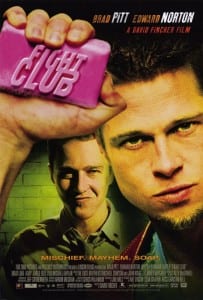 Constantly traveling around the country as an insurance claim investigator can be grueling on a person’s body and their psyche. Our unnamed narrator (Edward Norton) not only lives that life, but it has driven him to the point of insomnia. Instead of prescribing the narrator sleeping pills, which can be addictive, his doctor advises him to visit a support group so that he can see real suffering. The narrator has an odd obsession for balls, and elects to attend a meeting for men who have had testicular cancer. He finds relief in pretending to be a victim with the other members, and his insomnia goes away.

The narrator becomes addicted to support groups, and attends meetings across the city every day of the week. All goes well until Marla Singer (Helena Bonham Carter), shows up as an attendee at the testicular cancer support group. The narrator is bothered by the fact that Marla is doing the same thing he’s doing; pretending to be a victim at a variety of support groups to make herself feel better about her situation in life, and his insomnia returns. Instead of ridding himself of this false persona he has created, the narrator negotiates with Marla on which days they will attend certain meetings, so he doesn’t have to see her again. She agrees, and the two exchange phone numbers.

On a flight home from a crash investigation, the narrator meets Tyler Durden (Brad Pitt), and the two become inseparable. They too exchange phone numbers, and the narrator returns home, but finds that somehow his apartment has beed destroyed by an explosion. The narrator has nowhere to go, so he calls Marla. She doesn’t answer, so he calls Tyler. They meet at a dive bar in a forgotten part of the city to have a few beers. Their conversation leads to Tyler rambling on about his thoughts on the dangers of consumerism. It’s as if Tyler’s reading the narrator’s mind; saying everything that the narrator has thought, but has never been bold enough to say out loud.

Tyler invites the narrator to stay at his ramshackle abode, but before they can leave the bar, he asks the narrator to hit him. Reluctantly, he does, and the two get into a full on brawl with each other, but there is no anger in their punches. The pain makes the men feel more alive. The narrator never moves out of Tyler’s house, and on the nights when it’s possible, the two men fight each other in front of that same, old dive bar. Their fights eventually attracts crowds of men who want to fight too, and this leads to the formation of a “fight club” that meets in the basement of the bar.

One fateful night, Marla tries to overdose on some pills, and calls the narrator for help, but the narrator isn’t in the right mind to talk to her, and sets the phone down without hanging up on her. Tyler, pops up out of nowhere, and takes control of the situation. Tyler saves Marla by taking her home to his happy place, and bones her like a madman. When the narrator confronts Tyler about his relationship with Marla, Tyler tells the narrator to never talk about him to Marla. The consequences would be too grave.

Things are going great with the fight club, and chapters open across the country. Tyler, ever the anti-corporate/anti-materialism crusader, transforms these clubs into shells of their former selves. They take on a more sinister flair under his guidance, and become an underground terrorist organization called “Project Mayhem”.

The narrator is concerned that Tyler is shutting him out of the organization, and wants to be more involved before Tyler has total control, so the narrator confronts him, and Tyler suddenly disappears. The narrator becomes convinced that “Project Mayhem” needs to be shut down when one of the members is killed by a police officer in an sabotage operation gone awry. The narrator is dually stirred when he learns that the dead member is Bob, the meatloaf-looking man with tits the size of a plastic surgeon’s wife, who befriended him at the testicular cancer support group some time ago. He sets out to confront Tyler over this by tracing his last known locations around the country, but Tyler always knows what the narrator is thinking, and is always two steps ahead of him.

On a visit to a city, one Project Mayhem member greets the narrator as Tyler. Stunned by this, the narrator calls Marla, only to find that she too thinks he’s Tyler. Suddenly, Tyler appears in the room with the narrator; angry that the narrator mentioned him to Marla. He tells the narrator that they are dissociated personalities within his body, and every time he’s asleep, Tyler is awake and in control. This is too much for the narrator’s mind to process, and he passes out.

He wakes up sometime later, only to find that Tyler has made a number of phone calls while he was unconscious. He discovers Tyler’s grand plan to erase debt by having Project Mayhem destroy the buildings where credit card companies store their records. He goes to the police to stop the bombings, but Project Mayhem members are everywhere. Three of the four cops in the room are part of the organization, and they attempt to cut the narrator’s balls off when fourth cops is out of the room. The narrator escapes, and heads off to stop Tyler.

He goes to one of the targeted buildings, and tries to disarm the bomb there, but Tyler appears, and quashes that plan in a mono a mono brawl for it all. Tyler takes the narrator to his new quiet place a top another building with a view of all the carnage that’s about to happen. When the narrator wakes up, he finds himself being held at gunpoint by Tyler, but since he is Tyler, he is actually in control of the gun, and puts the gun in his mouth. He fires into his cheek, but doesn’t die from the injury. The same can’t be said for Tyler. In the narrator’s mind, Tyler is dead, and Tyler collapses to the ground with an exit wound to the back of his head. Some members of Project Mayhem show up with Marla, then leave to get some gauze for their leader. Bleeding from a gaping wound in his face, the narrator and Marla share a tender moment alone, holding hands, while the bombs detonate, and the buildings collapse around them.