When a high school basketball player named Jamal Wallace scores exceptionally high on a statewide standardized exam, a prestigious prep school in Manhattan accepts him to attend their school. Eventually, this lead him to befriend a reclusive writer named William Forrester. As their unlikely friendship blossoms, William overcomes his reclusive tendencies and Jamal overcomes racial prejudices to pursue his dream of writing. 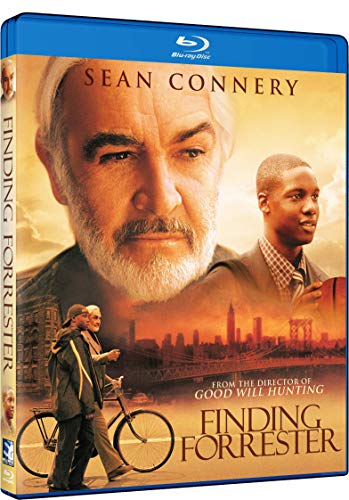 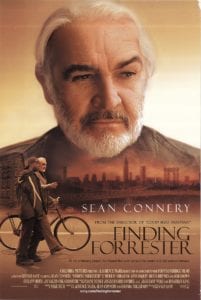 Finding Forrester is the Nicholl Award-winning screenplay by Mike Rich. Set in the Projects in the Bronx, New York, Jamal is a black 16-year-old son of a single mother who hangs with his boys, plays hoops on the city playground, and happens to write miraculous works of literary art in his tiny notebooks for nobody to read but himself.

Jamal has taken some tests at school where he is a C student, but his test scores show much potential. Overlooking the young men playing hoops from stories up in an old building is “The Window”: a mysterious old geezer the boys think is anywhere between a demented Mr. Rogers and Charles Manson’s evil twin (if you ask the boys).

One day, the boys dare Jamal to sneak into “The Window”’s house, and bring back proof he was there. Jamal does exactly that but leaves his backpack behind accidentally, including his precious notebooks of writing. A few days pass, and the backpack is thrown down to Jamal as he walks by.

He finds everything intact except his personal books have not only been read, they have been corrected. He walks up the flights of stairs and knocks on the door. The Window rudely yells at him, and tells him to stay away in no uncertain terms. Jamal keeps coming back, and ultimately is invited into the apartment.

Once inside, Jamal realizes the man is a Scottish hermit, and has racks and racks of books that intrigue him. He asks for the hermit’s help in his writing. Through some tense negotiation, the man agrees with some very strict rules. Meanwhile, Jamal’s test scores get the attention of an elite private school in Manhattan.

Jamal and his mother visit the school, and Jamal is led around by local rich girl, Claire. During the visit, Jamal visits a literature class with intimidating Professor Crawford. Jamal is handed a legendary first novel written by a reclusive writer from the 1950s named William Forrester who has pulled a JD Salinger and disappeared from society.

Claire tells Jamal this book is the greatest thing she’s ever read. On Jamal’s second day at the school, he is recruited to play for the basketball team as their new star. Claire also brings a rare first printing of Forrester’s book and shows it to Jamal. The author’s photo is on the back, it’s The Window!

When Jamal researches the writer, he finds out the author wrote one book then vanished; never to be heard from again. Jamal visits the apartment and when asked about the new school, Jamal pulls out the book and asks if it’s really him. Forrester panics upon his discovery and makes a deal w Jamal…he will help the boy learn to write, but no telling the world about him, or questions about his family or about why there was only one book.

Jamal agrees and begins working. Through several weeks of writing lessons, going to the new school, making new friends and losing his old friends, becoming a bonafide uptown basketball star, Jamal also incurs the ire of Professor Crawford who thinks Jamal is a fake, and just a stupid jock. Jamal spends more time, and gets better and better as a writer due to Forrester’s increasingly generous and admirable help, thus forming a somewhat father/son relationship as true friends.

When Jamal challenges Crawford in front of the class, showing not only that Jamal is smarter than Crawford, but he is also in over his head, he is promptly kicked out of class. The school is holding an essay contest that Jamal wants to enter, but Crawford only wants Jamal to write in his presence because he thinks Jamal is a fraud.

Jamal refuses to write anything, but instead turns in a paper he had written in Forrester’s apartment. In spite, Crawford turns in Jamal’s paper as plagiarized. Jamal is asked where he learned to write like that, but Jamal does not say anything about Forrester as he promised.

Jamal is instantly ostracized by the school board, and is put on probation pending a hearing. Jamal begs Forrester to help, but the agoraphobic Forrester chooses to stay hidden. Abandoned by his teacher and feeling alone in a rich world, Jamal is playing for the state championship on television when the head of the school board, Claire’s disapproving father, offers Jamal a choice: win the championship for the school and all is forgiven, or, lose and he’s kicked out of school. When Jamal is fouled at the end of the game, he takes the final two foul shots, missing both.

The next day, Jamal shows up for the big essay contest finals, but is kept silent by Crawford, who obviously detests Jamal, as does most of the school for losing the game. Through the tense meeting, Forrester arrives to much ado, and proceeds to read a heretofore unheard of masterpiece to the entire assembly.

At the end, to much clapping and praise about Forrester’s amazing writing ability, Forrester reveals to everyone that he has just read Jamal’s personal writing. Jamal is instantly forgiven, and is welcomed back at the school. Forrester and Jamal walk out of the school where Forrester reveals he is heading back to Scotland because he’s been gone too long.

A year later, Jamal is being recruited by top universities. He sits down with one man who informs Jamal he is actually Forrester’s attorney. Forrester has died, and has left everything in the apartment and the box in front of him to Jamal. Jamal goes into the dusty, book-filled apartment, and opens the box. It is Forrester’s second novel with the forward to be written by Jamal. Jamal wanders down to the basketball court below the window, and begins a pickup game with all his old friends from the projects.