Andy and Vicky McGee participate in a college experiment that is run by a secret government organization known as the Shop. The McGee’s each receive telepathic powers from the experiment. Years later, the couple has a nine-year-old child named Charlie who has the power to create fire. The Shop wishes to conduct experiments on Charlie and to control her power. After the Shop kills Vicky, Andy must go on the run with his daughter in order to save her. But how long can they run before the evil forces eventually catch up with them? 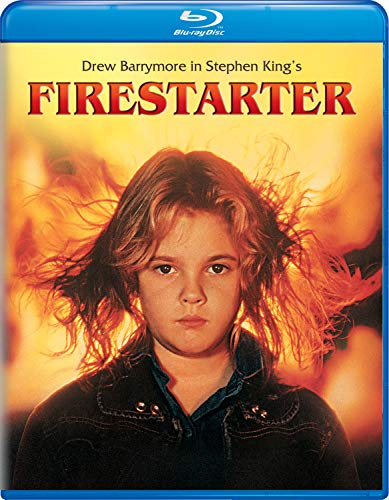 The summary below contains spoilers.
Andy McGee (David Keith) and Vicky Tomlinson (Heather Locklear) participate in an experiment with a group of college students where they are given a dose of a low-grade hallucinogen referred to as Lot-6. Most of the other participants suffer headaches and twitches, and some even begin to maim themselves. Andy and Vicky, however, are given telepathic abilities by the drugs. Vicky can read minds and Andy can control others to do and believe what he wants them to. Vicky and Andy fall in love and soon have a child, Charlene “Charlie” McGee. Vicky and Andy are surveilled and monitored by the Shop, a branch of the Department of Scientific Intelligence, who conducted the experiment on them. Nine years later, Andy, Vicky, and Charlie (Drew Barrymore) live under the stress of the surveillance as Andy and Vicky attempt to teach Charlie to control her power to create fires.

One day, Andy comes home from work and finds that Vicky has been murdered. Suspecting the worst from the Shop, Andy stops two men as they try to abduct Charlie from her friend’s house. The Shop wants to test and potentially weaponize Charlie’s power for their own purposes. Andy “pushes” the kidnappers into believing they are blind before going on the run for the next year.

A year later, both Andy and Charlie are exhausted from the constant pursuit. The find themselves without money and no place to go. Andy constantly tries to teach Charlie not to use her power for fear of it going out of control, but Charlie’s control slips when her emotions run unchecked. Even worse, Andy begins to suffer from nosebleeds as a side effect of his overuse of his power. They talk about going to the newspapers and telling the world of everything the Shop is doing in secret.

Suppose we have a child here who, someday, is capable of creating a nuclear explosion simply by the power of her will? Dr. Joseph Wanless (Freddie Jones)

One day while hitchhiking, Andy and Charlie are picked up by a friendly farmer named Irv Manders (Art Carney) who offers to give them a ride to a nearby town. Irv takes a liking to them and invites them back to his farm to have lunch with him and his wife Norma (Louise Fletcher). While Norma entertains Charlie with the farm animals, Andy confesses his circumstances to Irv. Irv is skeptical but offers to help Andy and stands with him when the Shop agents arrive at the farm. Charlie uses her power to fend off the agents who quickly retreat. As a result, Charlie and Andy must go on the run again. Irv gives them his jeep, and the father and daughter head to Charlie’s grandfather’s secluded cabin in the woods.

Once there, Andy writes letters to the newspapers about their plight. The Shop has set up agents to watch the town near the cabin and sees Andy mail the letters. One of the Shop’s assassins, John Rainbird (George C. Scott), intercepts the letters and kills the postman. Rainbird tranquilizes Charlie and Andy as they prepare to leave the cabin. Rainbird takes Andy and Charlie back to the Shop facilities and turns them over to Captain James Hollister (Martin Sheen), the head of the Shop.

Andy and Charlie are kept separated, and Andy is constantly drugged to limit his ability to use his powers. Hollister attempts to get Charlie to use her powers by promising her toys and to see her father, but she refuses to cooperate. Hollister also attempts to test Andy’s abilities, but Andy is unable to push anyone due to his exhaustion and the drugs he is given to keep him sedated. Rainbird pretends to be a friendly orderly named John to gain Charlie’s trust and encourages her to submit to Hollister’s tests. After being promised that she could see her father, Charlie finally agrees to submit to the tests.

Charlie displays her awesome power to the scientists and uses the lessons that she learned from her mother and father to keep her power under control. Her power levels begin to increase significantly. Eventually, Charlie demands to see her father as promised, although Hollister and Rainbird have no intentions of honoring the promise. At the same time, Andy stops taking his medication and regains his powers. One day, Andy uses his power on Hollister to get the man to assist him in a plan to escape the facility with Charlie. Andy learns of Rainbird’s ruse as John from Hollister. Andy decides to leave with Charlie that night. Andy gets a note to Charlie that tells her about his plan to escape. Charlie immediately tells her friend John about her father’s plan. Rainbird suspects that Hollister has been pushed by Andy.

That night, Rainbird hides in the barn of the facility with the intent to kill Charlie, something he has wanted to do since hearing about her. When Andy and Hollister arrive, Rainbird kills Hollister and shoots Andy. Andy tells Charlie that Rainbird is not her friend which displeases Charlie. Andy uses his power to get Rainbird to jump from the top of the barn down to the floor, causing the assassin to break his leg. Andy tells Charlie to use her power to destroy the facility and then dies from the gunshot wound to his neck. Rainbird attempts to shoot Charlie, but the young girl uses her power to melt the bullet and engulfs Rainbird in fire, killing him.

An entire security team arrives to take down Charlie. However, the young girl melts their bullets and uses giant fireballs to destroy the men, their vehicles, and the facility itself. Eventually, Charlie gets away. She hitchhikes back to the Manders’ farm, and the old couple welcome her back, realizing that Andy has been killed and the young girl has nowhere else to go. The film ends with Charlie and Irv arriving in New York City to tell her story to the newspapers.