First Man is a film about the life of the legendary American Astronaut Neil Armstrong from 1961-1969, on his journey to becoming the first human to walk the moon. It details Armstrong’s early days as a test pilot and astronaut. The film recounts the personal tragedies and sacrifices that Armstrong endured during one of the most dangerous human endeavors ever undertaken. Through it all, Armstrong overcomes it all to become the first man to walk on the moon. 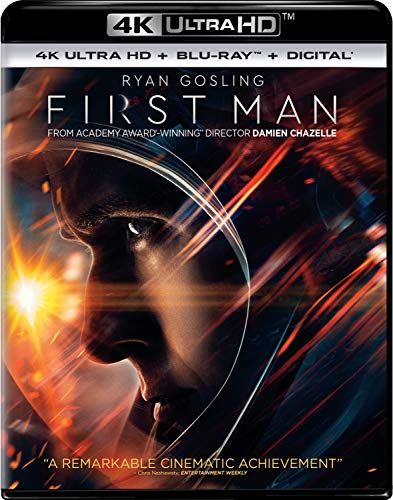 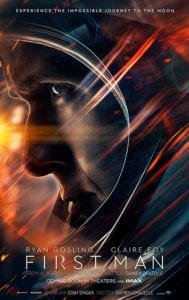 First Man begins in 1961 when Neil Armstrong (Ryan Gosling) is working as a NASA test pilot. He is flying the X-15 rocket-powered spaceplane when he accidentally bounces off the atmosphere. Armstrong recovers and lands the plane in the Mojave Desert, but the program believes that his reoccurring mishaps are due to distraction and grounds him. Armstrong is distracted by his 2-year-old daughter’s battle with a brain tumor. The daughter, Karen, is undergoing X-ray treatment and Armstrong is extremely active in the treatment, keeping detailed logs of her symptoms. The family continually tries to find possible alternative treatments for the child, but ultimately, she dies a few months later.

Armstrong attempts to hide from his grief by returning to work and applies for Project Gemini, NASA’s second human spaceflight program. Armstrong is accepted into the program as part of NASA Astronaut Group 2, which includes fellow pilots Ed White (Jason Clarke) and Elliot See (Patrick Fugit). Armstrong, his wife Janet (Claire Foy), and their son Rick (Gavin Warren) move to Houston and live in a neighborhood with other astronaut families, including White’s and See’s.

Once in the program, the astronauts are pushed to their limits by the Chief of the Astronaut Office, Deke Slayton (Kyle Chandler) who challenges the new astronauts and impresses upon them the importance of the Gemini program succeeding and beating the Soviet Union to the moon. At that point in time, the Soviets had reached every major milestone in the Space Race before the Americans had. During this training time, the Armstrongs have a second son and name him Mark.

In 1965, the family is beginning to settle into their lives in Houston. Armstrong continues to do well in the program but is still awaiting his selection for a crew. The Soviets once again beat the Americans and complete the first extravehicular spacewalk. Shortly afterwards, Armstrong is informed that he will be the commander of the Gemini 8 mission with David Scott (Christopher Abbott) as pilot. Just prior to his mission, Armstrong is informed that See and Charles Bassett were killed when their T-38 crashed. Armstrong retreats further into himself with his grief, driving a wedge between himself and his family.

Armstrong and Scott successfully launch the Gemini 8 spacecraft. As part of their mission, the men dock their craft with the Agena target vehicle. However, their spacecraft begins to roll at a rapid rate soon after docking. Armstrong undocks with Agena which accelerates the roll, causing Armstrong to activate his thrusters to attempt to slow their spin. Scott loses consciousness due to the gravitational forces, but Armstrong maintains consciousness and eventually regains control of the craft with the assistance of the thrusters. Armstrong is forced to abort the remainder of the mission, an act that draws criticism from some in the program. However, NASA eventually determines that the crew was not to blame for the accident.

A short time later, White reveals to Armstrong that he has been selected for the Apollo 1 mission to conduct the first low Earth orbital test of the Apollo command and service modules. White is teamed with Gus Grissom (Shea Whigham) and Roger Chaffee (Cory Michael Smith). The trio conducts a test of the capsule on the launch pad on January 27, 1967. A fire breaks out in the capsule during the test and all three men are killed. Armstrong learns of their deaths while he is attending a public relations event on behalf of NASA at the White House. Once again, Armstrong retreats further into himself in his grief.

The next year, Armstrong is testing the Lunar Landing Research Vehicle in the desert when he is forced to eject to avoid being killed. After the accident, Armstrong is informed by Slayton that he has been selected to command Apollo 11, the mission that will likely land on the moon. The selection for the mission causes Armstrong to become more emotionally distant from his family, especially as the launch date approaches. Janet ultimately confronts him just prior to his launch and demands that he explain to his two young sons that he might not survive the mission to the moon. Armstrong talks to his sons and says goodbye to his family before heading off to his mission.

Four days later, Apollo 11 achieves orbit around the moon. Armstrong and Buzz Aldrin (Corey Stoll) undock the Lunar Module and begin their landing. During the landing, the two men realize that they are coming in too fast and are going to overshoot their designated landing site. Armstrong is forced to take manual control of the spacecraft, but successfully lands the craft with less than thirty seconds of fuel remaining.

Armstrong leaves the Lunar Module and becomes to the first person to walk on the moon. During the mission, Armstrong stands at the edge of the Little West crater on the moon. He pulls out his deceased daughter’s homemade bracelet and drops it into the crater. The astronauts return safely to Earth and are placed in quarantine for thirty days. Janet visits Armstrong while he is in quarantine, and the couple begins to reconnect with each other even though they are separated by glass.