In Fit to Kill, Kane is back at it again, and he’s out for even more revenge; both on Lethal Agent Donna, and the villainous Mr. Chang. We meet the contract killer named Blu Steele who shows up to kill Kane on the orders of another gangster named Po. However, Kane is expecting her, and the attempt fails. Instead, Kane hires old Blu to help with his aforementioned revenge. Back in Hawaii, Donna and Nicole are ordered to protect Mr. Chang at a party where he will return an Infinity Stone called the Alexa Diamond to the Russian people after it was stolen in WWII. However, Kane will steal it from Chang. Po will steal it from Kane, and Donna will finally steal it from Po. But will anyone be able to stop Blu Steele and her remote control helicopter from killing Donna? It’s Anchor’s away in this B movie bonanza. 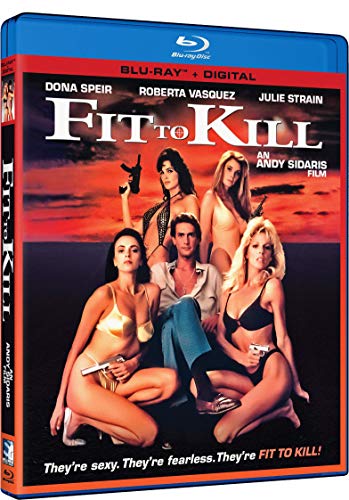 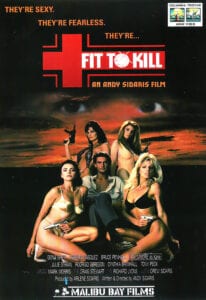 Fit to Kill begins in a waterfall in Hawaii. L.E.T.H.A.L. agents, Donna and Nicole, relax in a pool next to their guns. An alarm goes off, and the girls leave for cat and mouse paintball exercise outside of Las Vegas. They defeat Bruce and Shane three games to none.

As the girls go one way, and the boys another, aA remote control chopper arrives. It attacks both teams, but misses. It was just another test from Lucas who then calls them in to berate them for not being on guard at all times. His boy, Dr Emerson, next tells the girls about this special helicopter being L.E.T.H.A.L.’s latest and greatest weapon. They all head back to KSXY radio in Hawaii for a meeting.

Still in Vegas, Kane relaxes while Silk shows him everything she bought on a shopping trip. The killer, Blu Steele is there for some sexy yoga at sunset before heading over to kill Kane on a criminal named Po’s orders. She fails because he was expecting her. He and Blu Steele join forces to take out Donna and Nicole once and for all.

In Hawaii, Lucas tells the team about Mr. Chang’s arrival to Maui. The agents will provide security and support for him at a special party where he will give the Alexa Diamond, a rare Russian stone stolen during WWII, back to the Russian people.

Everyone on both sides of the law now heads to Maui for one big cat and mouse game where the stakes are raised and bullets are real. Emerson is there to sell Kane and Blu Steel another remote helicopter for profit, and we are somehow immediately taken back to Vegas again. Blu Steel kills Emerson with a missile from the helicopter.

We go back to Hawaii. The Russian envoy, Mikael Petrov, arrives for the party. Kane is also at the party, and Donna comes face to face with him. He asks her to dance with him while Edy lipsyncs a lovely song. Donna is digging Kane’s groove though. Mikael hits on Ava, and Nicole talks to Bruce via walkie-talkie. Lucas has Nicole keep an eye on Donna and Kane as she’s losing focus. There’s going to be a lot of boning after this party.

Kane has Blu Steel drug Donna when she follows him to Chang’s room. There, the two steal the diamond, and Blu drugs Kane too to give himself an alibi. The L.E.T.H.A.L. agents spring into action while Kane celebrates his little victory boning Silk. Blu Steel has a little celebration of her own with Captain Burke in the boat’s kitchen. Anchor’s away!

Kane next hires Evel and Kenevil (not their real names) who are fresh out of the state pen, sorry Penn State, to kill Lucas and Edy Stark when they are alone. There, the boys also accidentally break Kane’s necklace that L.E.T.H.A.L. uses to track Kane.

Next up, Nicole and Bruce bone in Hawaii while Evel and Kenevil buy a remote control motorcycle where the pictures are in English because these guys only buy American. Nicole and Bruce track the signal from Kane’s necklace which some local thugs in Las Vegas stole at a pawn shop there.

Molokai? Las Vegas? What does location matter in the movie at this point?

Lucas and Edy have some sexy time at a beach and also at a seaside villa. Then they bone in that same waterfall pool from the beginning of the movie. Evel and Kenevil still have a job to do, and they interrupt Lucas and Edy while they sip champagne under an umbrella at the beach.

They drive a remote dune buggy made in Honda, Massachusetts to kill them, but a transistor radio interferes, and the buggy returns to the boys and blows them up in their tent. They survive though. Lucas and Edy walk up to send them back to Penn State.

Nicole and Bruce show up to the trackers location, and ills the thieves at their hut. Good news is that they now know they can not track Kane.

As Donna spies on Kane’s boat anchored in Lake Havasu, Arizona/Hawaii, Po and his goons arrive to steal the diamond for themselves. Blu Steel reveals that she’s still working for him too when she holds Kane at gunpoint to keep him from fleeing. Donna’s captured and taken to the boat for a little get together with all our criminals. They take the diamond, but it’s a fake.

That night, an unknown assailant shows up to KSXY, and attacks Ava. Mikael Petrov shows up out of the blue to save the day, but the attacker escapes. (He really works for Mikael, and the attack was an excuse for Mikael to bone Ava.)

Donna and Kane are go with Po’s gang to get the real diamond from Mr. Chang. Kane tells Donna that the reason he wants the diamond is that his father had stolen it originally, and then Chang killed his father and mother for it when he found out the diamond’s worth. Donna and Kane bone in a dream sequence that takes place in Kane’s mind.

They head to Mr. Chang’s place in Hawaii, but Donna is able to steal the diamond on the way off the boat. Is it the real one, or the fake one? At this point, who the fuck knows.

Chang taunts Kane, but Kane and Donna don’t fall for it. They instead warn him that Po is no more a good Samaritan than Kane is.

A fight ensues with Po shooting Chang dead. Bruce and Nicole are there, and all Hawaiian hell breaks loose. (Side note, some of Po’s men shoot at them in Hawaii from the deck of the boat anchored in Lake Havasu, Arizona. Good bullets!)

Lucas flies his remote helicopter, and shoots Blu Steel’s helicopter out of the sky. Blu Steel shoots Lucas from the boat, and then goes after Donna. Donna takes control of the helicopter, and uses its last missile to blow up the boat with Blu Steel and Po aboard.

Donna’s work is done. The film ends with the diamond returned to Mikael Petrov and the Russian people. Kane escapes with Silk on an inflatable raft to an uncertain future.

One last champagne cheers in a hot tub for what will be the final film for many Andy Sidaris regulars.