In Flight of the Navigator, a 12-year-old boy named David disappears on July 4, 1978. When he reappears in July 1986, even though eight years have passed, the boy hasn’t aged. On the very day he returns, not-so-coincidentally, a flying saucer crashes into some power lines. After some tests on David, the hospital contacts NASA where they find he’s somehow connected to the UFO. Turns out, he’s more connected than anyone could imagine. The ship needs the navigational information stored in his brain for it to repair itself to return home. However, can David ever return to 1978? 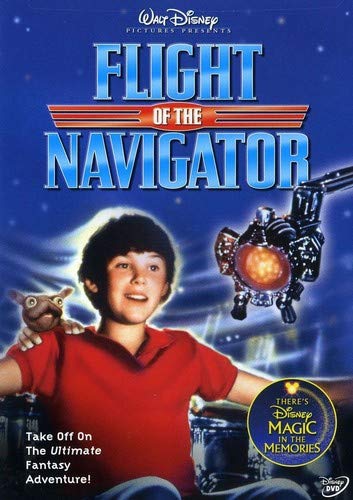 Flight of the Navigator

‘Flight of the Navigator’ Movie Summary 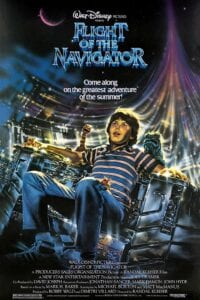 Flight of the Navigator begins on July 4, 1978, in Fort Lauderdale, Florida. After the Freeman family spends an afternoon at the park watching a Frisbee dog competition, they return home—dropping off 8-year-old Jeff at a friend’s house along the way.

That night, Helen asks her 12-year-old son, David to pick Jeff up at that house. As he walks through the woods with his dog, Jeff sneaks up from behind, scares him, and runs home. Meanwhile, the dog has spotted something down in a ravine. When David goes over to it, he accidentally falls into the hole, and it knocks him out cold. When David comes to, he’s alarmed to discover that eight years have passed—it’s now 1986, and Twisted Sister rules the world!

David returns to his house to find another couple live there, so they call the police to help the boy. The police are surprised when they learn David exactly matches the description of a boy who went missing eight years ago—but this kid they have at their station didn’t age one day. They reunite David with his now older parents and his 16-year-old “little” brother, Jeff.

NASA’s called to the scene

Elsewhere in Florida, a different set of police find a spaceship that crashed through some power lines. They call Dr. Louis Faraday at NASA who quickly confiscates it. While this is going on, David undergoes tests at the hospital to make sure he’s okay. During these tests, his brain is able to directly talk to their computers to reveal a vector image of the spaceship that’s crashed.

After the hospital electronically sends Faraday’s team a copy of the spaceship David’s mind drew, NASA’s digital plotter reveals the two ships are one and the same. Faraday immediately races to Fort Lauderdale to meet David. Once there, he asks David to come to the NASA research facility for just 48 hours for extra tests so they all can learn the truth about what happened to him. While initially reluctant, David and his parents agree—but for only 48 hours—that’s it.

During their first set of experiments, Faraday finds David’s mind filled with star charts and other technical information that extends far beyond NASA’s knowledge. From this information, NASA learns David somehow wound up 560 light years away on the planet Phaelon. Because his journey took only 2.2 hours to get there, the scientist figure the reason David also did’t age the eight years everyone else on Earth did is due to the fact he traveled faster than the speed of light. With this revelation, Faraday decides to keep David longer than the 48 hours he promised his parents.

The next morning, David receives a telepathic communication from the spaceship that’s in NASA’s nearby hanger. It needs David’s help. So, David escapes his room via a delivery robot named R.A.L.F., and it somehow knows to head to that hanger.

The flight of the navigator begins

There, David secretly boards the spaceship where he meets the robotic commander named Trimaxion Drone Ship—Max for short. Max refers to David as the Navigator. Once David escapes the NASA complex inside of Max, it reveals to David that his mission is to travel across the galaxy collecting biological specimens from various planets. It then takes them to Phaelon for study before traveling back in time to return them to their homes.

When Phaelon’s scientists discovered humans only use 10% of their brain, they filled the remainder of David’s mind with miscellaneous information—including all of the star charts Phaelon’s astronomers knew about.

However, when Max returned him to Earth, he was not able to take him back to 1978 as a human would unlikely survive time travel. So, Max dropped David off, but then unfortunately crashed into some power lines while looking at daisies in a field. That crash accidentally erased all the computer’s star charts and data. Therefore, he needs the information in David’s brain to continue on with his mission.

As Max prepares the spaceship for a mind transfer, David meets eight remaining alien specimens on board. He befriends a bat-like creature called a Puckmaren. Max can not return him to his planet as a comet destroyed it in his absence.

Once Max performs the mind transfer with David, not only does he reacquire the star charts he needs, but also obtains the emotional qualities of a 12-year-old boy. Max devolves into Pee Wee Herman. The two bicker like little brothers while traveling around the world—causing several UFO reports in both Tokyo and the US as they get lost while looking for Fort Lauderdale.

Back at NASA, Carolyn McAdams, an intern who befriended David, tracks down David’s family to tell them about David’s escape in the spaceship. As she does, NASA goons show up to confine the Freeman family to their house. They take Carolyn back to the facility where her internship looks to be over.

Now lost, David and Max stop off in Texas to ask for directions before flying to the Florida Keys. At a gas station there, David calls Jeff to send him a signal so he can find their new home in the sprawling city. Jeff agrees, and sets off a bunch of fireworks on the rooftop when night falls.

David and Max spot the signal, but when they arrive at the house, they find insidious NASA agents surrounding the not-so-Freeman home. David realizes that he can never be with his family, and orders Max to return him to 1978. Max once again warns him that the trip could kill David, but he doesn’t care. He will risk it.

Max takes them back where David wakes up in the ravine. He runs home to find everything back to normal. It’s the Fourth of July again in 1978. The Freemans are waiting for him in a little boat where David tells them all he loves them—even that little geek, Jeff.

When the Puckmaren pops out of David’s backpack, Jeff spots it. David makes him keep the little guy secret. Max flies back into space with the parting words of “See you later, navigator,” as he flies through the night’s light show.