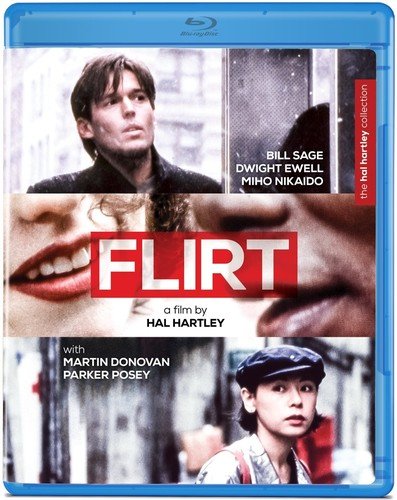 Olive Films has announced that they are bringing Flirt to Blu-ray this April. The film is written and directed by Hal Hartley and stars Martin Donovan, Michael Imperioli, Harold Perrineau, and Parker Posey. Flirt will be available online and in stores beginning April 22, 2013.

Dizzying and deadpan in the best Hartley style, “Flirt” begins in New York City with the story of Bill, whose girlfriend gives him an ultimatum a few hours before leaving for a trip to Paris: make a commitment or end the relationship. Asking for ninety minutes to think it over, he sets out to investigate the only remaining romantic possibility in his life–a married woman named Margaret. Instead, he is forced to confront Margaret’s devastated husband, Walter, who turns up with a gun, threatening to shoot himself.

Flirt was released in August of 1996 and grossed a paltry $263,192 at the box office. However, it helped solidify Hartley’s reputation as one of the hottest independent directors in the 90’s.

Disclaimer: Affiliate links are contained in this post. This means when you click a link, and purchase an item, Movie House Memories will receive an affiliate commission. Advertisers and Affiliate Partnerships do not influence our content. See our Terms of Use about the inclusion of affiliate links on this site for more information.
March 6, 2013
1 minute read
Show More
Back to top button
Close
Close