In Focus, Nicky Spurgeon is an extremely accomplished con man who takes an apprentice named Jess. Soon a romance develops between the two, but since they are both in the profession of lying, Nicky realizes that it doesn’t mix well with love. The two meet again three years after he breaks up the affair. Then things start to get complicated. 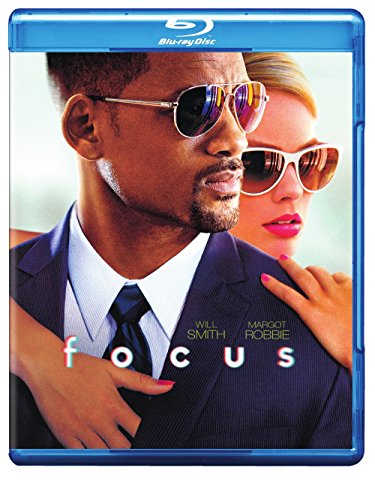 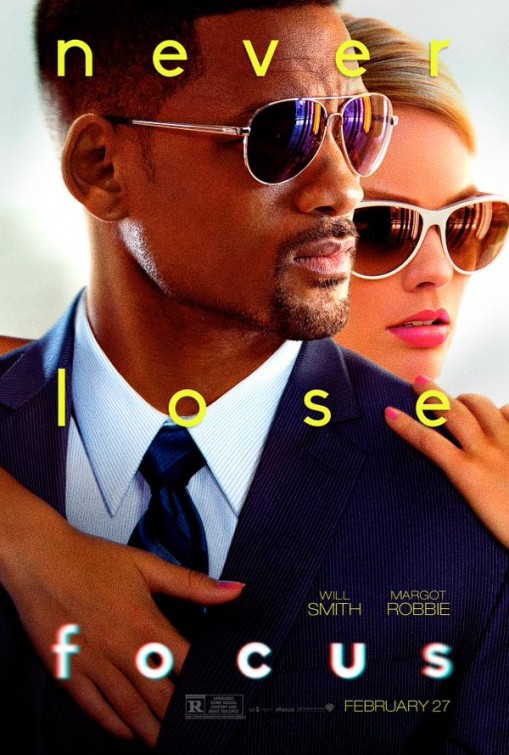 In Focus, con man Nicky Spurgeon (Will Smith) encounters an inexperienced grifter Jess Barrett (Margot Robbie) at an upscale restaurant and hotel. When Jess fails to get Nicky’s money, Nicky advises Jess and her partner to never lose focus when they are faced with unexpected situations. However, Nicky is interested in Jess and convinces her to have a drink with him the next day. During drinks, Nicky tells her a story of how Nicky’s father killed his grandfather in a stand-off, explaining the con man tactic called a “Toledo Panic Button” which means that you shoot your partner to prove you’re loyal.

Jess follows Nicky to New Orleans where she meets Nicky’s crew. Nicky puts her through a test where she has to pick some pockets, and ultimately, Jess is allowed to join the crew. Nicky and Jess begin to develop a romantic relationship which seems to make Nicky uncomfortable. Nicky has been taught by his father not become emotionally involved with anyone. The crew has a successful run where they make over $110,000. Nicky is in charge of the money, and he and Jess go to a championship football game with it. At the game, Nicky gets into a round of increasingly extravagant bets with gambler Liyuan Tse (B.D. Wong), eventually losing all of his crew’s money.

In a last ditch effort to win it back, Nicky makes a bet of over two million dollars and asks Tse to pick any player on or off the field and says that Jess will guess the number picked. Upset, Jess is forced to pick a number. She sees one of Nicky’s crew dressed as a player on the field (Adrian Martinez) and realizes it’s another con. She picks that player’s number, which is correct, and they take Tse for a few million dollars. After they leave the game, Nicky explains that he and his crew have been subconsciously prompting Tse for days before the game, causing him to pick Nicky’s man. After Nicky explains the con to Jess, he gives Jess her cut of the con and leaves her.

Three years later, Nicky is in Buenos Aires where he is being recruited by a billionaire motorsport team owner Rafael Garriga (Rodrigo Santoro) to work a con on one of his competitors. Garriga wants Nicky to pose as a disgruntled engineer from his team who is willing to sell Garriga’s custom fuel algorithm to Australian businessman McEwen (Robert Taylor). Instead of giving McEwen the actual algorithm, Nicky will sell a formula that will actually slow the car down. Nicky and Garriga agree on terms despite the warning from Garriga’s head of security, Owens (Gerald McRaney), to not trust Nicky.

The con is to begin that night at a pre-race party, where Nicky is to make a scene. However, at the party Nicky sees Jess who is now Garriga’s girlfriend. The sight of Jess throws Nicky off, but he is able to get into a drunken brawl with Garriga before being thrown out. Having seen the fight, McEwen sets up a meeting with Nicky.

Nicky begins pursuing Jess while moving Garriga’s plan forward. Eventually, they rekindle their relationship, but they have to stay one step ahead of Owens, who almost catches them. Nicky sells the component to McEwen for three million euros, but also sells it to all of Garriga’s other competitors as well. However, he does not sell them the bogus component, but the actual component which Nicky has been able to acquire.

That night, Nicky and Jess attempt to flee back to the United States together with the money, but they are caught by Garriga’s men and taken to his garage. They are both tied up and Nicky is beaten. Garriga wants to know how Nicky acquired the actual component and begins suffocating Jess in an attempt to get him to talk. In order to save Jess, Nicky explains that he gained access to Garriga’s computer systems by tricking Jess into believing he had feelings for her and giving her a necklace that was equipped with software that would allow Garriga’s password and login information to be recorded. He tells Garriga that Jess was conned and had nothing to do with it.

Garriga laughs at the explanation, and Jess explains to Nicky that she is not Garriga’s girlfriend, that she was merely trying to steal his watch and make Nicky jealous. With no more cons to pull, Nicky promises to come clean in order to spare Jess’ life. However, when he starts talking, Owens shoots him in the chest. The apparent sudden murder disturbs Garriga, who suddenly leaves. Owens then reveals himself to Jess as Nicky’s father, Bucky, and that they just used the “Toledo Panic Button”. Bucky explains that he shot Nicky in a way that avoided any major arteries, and as long as they prevent the wound from filling up with blood and air and get him to a hospital, Nicky will survive. They collect the duffel bags full of millions of dollars and leave in Garriga’s car.

Bucky drives Nicky and Jess to the hospital and drops them off. Bucky takes the money for himself and tells them that is the cost of losing focus while on the job. While Jess helps Nicky into the hospital, he notices that she has Garriga’s watch on her wrist, having stolen it in the warehouse.