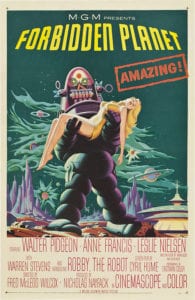 Metro-Goldwyn-Mayer released Forbidden Planet on March 15, 1956. Fatal Planet was the original title of the screenplay Irving Block and Allen Adler wrote in 1952. They shelved the project for a few years until Cyril Hume revised the script, and gave it a name change. William Shakespeare fans will notice many similarities to his play The Tempest in which both the characters and the story’s isolated locale share many parallels.

Fred M. Wilcox, the man who gave us Lassie Come Home, Courage of Lassie, and The Secret Garden directed the film. They released the film in CinemaScope, and for some lucky theater goers, stereophonic sound popped out of the speakers!

Forbidden Planet starred Walter Pidgeon as Dr. Morbius, Anne Francis as Altaira Morbius, and Leslie Nielsen as Commander Adams. For those of you who only know Leslie Nielsen from spoofs like Airplane and The Naked Gun, you might be surprised to find that he originally started as a serious actor before becoming a master of deadpan comedy; this is one of those roles. Blink too fast, and you might miss The Love Boat’s Captain Merrill Stubing himself, Gavin MacLeod, in one of his first roles (uncredited) as Cookie.

The film begins with Commander Adams and his crew, landing on planet to investigate the disappearance of a prior expedition sent there decades ago. They discover everyone, sans Dr. Morbius and his daughter, Altaira, are dead. Unfortunately, an invisible monster appears from nowhere, and kills all in its path. It’s the same monster that killed the previous crew, but somehow, Dr. Morbius and his daughter have survived the creature all these years. However, Morbius soon reveals a secret which shows he isn’t as lucky as he seems, and that secret threatens Commander Adams and his entire crew.

Forbidden Planet is something of a space western, and overall, it has the feel of an extended episode of the Star Trek television show from the late 60s. That shouldn’t come as a shock when you realize this film influenced Gene Roddenberry tremendously.

Leslie Nielsen makes for a great commander—he probably would have made a great Captain James T Kirk too, and you won’t find yourself waiting for him to say something funny. He plays it straight, and it’s believable. Dr. Morbius is the antagonist, but even though his character at times feels like a cross between Ming the Merciless and Spock, you have a bit of sympathy for him in the end. Anne Francis’ Altaira Morbius plays the 1950s vixen well; she may or may not know the effect she has on men, but she enjoys the attention regardless.

Robbie the Robot, arguably the most popular artificial intelligence character of its day, takes center stage in this film as possibly the most advanced piece of human technology mankind has ever made in this film’s universe. You can still find Robbie popping up in films and television shows today; the most recent being 2014’s The Great Mistake of Dr. Miles.

The music in this film is quite unique. While I always thought the soundtrack was created with a theremin, in fact, one was not used on Forbidden Planet. Bebe and Louis Barron composed the electronic music score, credited as electronic tonalities, using an electronic circuit called a ring modulator.

This film holds up very well over the years. The special effects were great for their time, and are still effective by today’s standards—maybe a tad bit more humorous though. This film is a must see for all the science fiction fans out there as it’s still an hour and a half well spent.

When a starship crew goes to investigate a planet's colony, they find only two survivors, and a deadly secret.