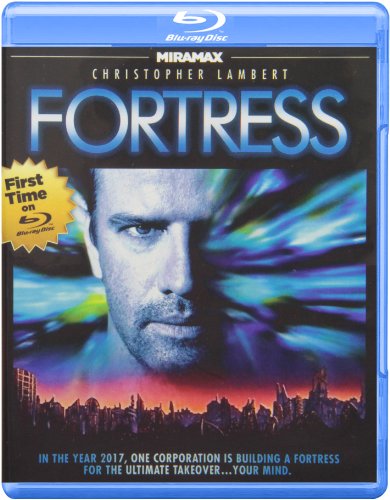 Echo Bridge Entertainment has announced that it will expand the Blu-ray availability of Fortress this May.  Currently, Fortress is available on Blu-ray exclusively through Best Buy.  The film is directed by Stuart Gordon and stars Christopher Lambert, Kurtwood Smith, Loryn Locklin, Clifton Collins Jr., and Jeffrey Combs.  Fortress will be available everywhere beginning on May 7, 2013.

The film is a futuristic prison movie.  Husband and wife John Henry Brennick (Lambert) and Karen Brennick (Locklin) are nabbed at a future US emigration point with an illegal baby during population control.  The resulting prison experience is the subject of the movie.  The prison is a futuristic one run by a private corporation bent on mind control in various ways.

Fortress was released in September of 1993 and grossed over $6 million at the box office.  The film was followed by a sequel, Fortress 2, also starring Lambert in March of 2000.  Exact technical specs and supplemental features to be included with this upcoming release are yet to be officially detailed.

Here is the theatrical trailer for Fortress, courtesy of drbrontosaurus.

Disclaimer: Affiliate links are contained in this post. This means when you click a link, and purchase an item, Movie House Memories will receive an affiliate commission. Advertisers and Affiliate Partnerships do not influence our content. See our Terms of Use about the inclusion of affiliate links on this site for more information.
February 3, 2013
1 minute read
Show More
Back to top button
Close
Close