A beautiful trapeze artist named Cleopatra agrees to marry Hans—the midget leader of a troupe of side-show performers. When the sideshow “freaks” discover Cleopatra is only interested in Hans’ future inheritance, they set out to make her one of them. 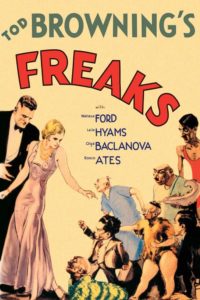 The film starts as a sideshow barker leads a group of people to see a horrific attraction. The women shriek in terror at the side of this figure. The man then tells the group that this ugly creature was once a beautiful woman, and this is the story of how she came to be…

We cut to a sideshow midget named Hans (Harry Earles) as he watches Cleopatra (Olga Baclanova)—the most beautiful big person he’s ever seen—perform her trapeze act. His fiancée, also a little person, is named Frieda (Daisy Earles) and she warns him that Cleopatra doesn’t see them freaks as a real people. Hans doesn’t listen to her words.

We then meet the many freak show performers at the circus. There’s the Bearded Lady (Olga Roderick) and her husband, the Human Skeleton (Peter Robinson). Conjoined twin sisters Violet (Violet Hilton), and Daisy (Daisy Hilton). Daisy is married to another performer named Roscoe (Rosco Ates) while Violet has a wealthy suitor (Albert Conti) that will remain unnamed. We meet the Half Woman-Half Man (Josephine Joseph), a Half-Boy (Johnny Eck), the Living Torso (Prince Randian), a midget named Angeleno (Angelo Rossitto) among others.

We then see the lovely Venus (Leila Hyams) in her trailer as she breaks up with circus’ strongman, Hercules (Henry Victor). Right after this, circus clown, Phroso (Wallace Ford), strikes up a more-than-friendly relationship with Venus. Meanwhile, Hercules meets Cleopatra and they too begin a relationship.

While this goes on, Cleopatra lead Hans on at every opportunity, asking him for money, back rubs, you name it. She likes the attention Hans gives her, but she and the “big” carnival performers laughing at him for it. When Frieda confronts Cleopatra, she lets it slip that Hans is wealthy from a large inheritance. Always an opportunist, Cleopatra conspires to get his money, and quickly marries Hans with the intent to kill him shortly afterward—even though Hercules remains her real lover.

After the wedding, the freaks throw the two a party where Cleopatra and Hercules get really drunk. She begins to slip poison into Hans’ drinks before making out with Hercules in front of the assembled freaks. As Frieda helplessly looks on, Hans comes to the conclusion that Cleopatra is having an affair with Hercules.

Angeleno then fills a large cup with an adult beverage. As each freak takes a sip, the others chant chant, “gooble-gobble, gooble-gobble” and accept Cleopatra as one of them. However, this spooks Cleopatra’ especially after Hercules jokes that the freaks are going to turn her into one of them. When Angeleno hands her the cup to drink out of, she mocks them and tosses the wine in his face. She then berates the poisoned Hans as Hercules puts him on her shoulders like a child.

Back in their trailer, a humiliated Hans realizes he’s been played the fool and doesn’t accept Cleopatra’s story that she was just drunk. Hans blames himself for being so stupid, but the poison Cleopatra’s been giving him fully kicks in and he passes out. Meanwhile, the freaks are watching from the shadows and they conspire to get their revenge on Cleopatra and Hercules for this humiliation.

The next night, as the carnival rolls out to another town, Hans confronts Cleopatra with Angeleno, Half-Boy, and a knife-throwing dwarf (Jerry Austin) as back up to keep her from trying anything funny. All Hans wants is her little black bottle of poison which she quickly hands over. The other freaks, well, they are after something more.

While this is going on, Hercules nonchalantly exists his trailer and walks over to Venus’ as it hobbles down the road. He intends to keep her from going to the police over his and Cleopatra’s plan to kill Hans. Phroso, who’s now officially Venus’ boyfriend, arrives to stop him, but as the circus strongman, Hercules easily overpowers him.

By now, a storm has hit and the road they are traveling on is muddy and deteriorating quickly. The trailer Hans is in sinks in a hole and crashes on its side, stopping the little convoy. Cleopatra takes this opportunity to run out the door in the rain.

At this same time, Hercules and Phroso fall out of their trailer, and as Hercules is about to kill him, the knife-throwing dwarf tosses a dagger deep into Hercules’ side. The remaining freaks castrate him off camera—and according to legend, Hercules becomes a soprano singer in Madame Tetrallini’s (Rose Dione) sideshow. However, that was removed from the final cut of the film as that seems to be too graphic for even pre-code Hollywood audiences. The freaks then track Cleopatra down in the surrounding wilderness where they make her as ugly on the outside as she is on the inside.

We then cut back to the original carnival from the beginning of the movie and the assembled crowd is still gawking at the hideous “Human Duck”. We see a very disfigured Cleopatra squawk like a duck.The freaks have cut out her tongue, gouged out her right eye, melted the skin off her hands, and cut off her legs before permanently tarring and feathering her. That’s what happens when little people drink from the same cup while chanting you’re one of them. Never reject the offer!

The film concludes with a humiliated and broken Hans in his luxurious estate, not wanting any visitors. Phroso, Venus and Frieda push their way past his butler anyhow so that Frieda can talk to Hans. She tells him not to blame himself for what the freaks did and that she still loves him. As Phroso and Venus exit stage left, Hans and Frieda share a loving hug for a happily ever after.