Millie Kessler is an awkward 17-year-old high school student who is a social pariah and suffers from depression over the death of her father a year prior. One night, she is attacked by local serial killer, the Blissfield Butcher. When the Butcher stabs her with a magic dagger, they switch bodies. Now, Millie has only 24 hours to get her identity back before she becomes permanently trapped in the body of a middle-aged serial killer that is wanted by the police. 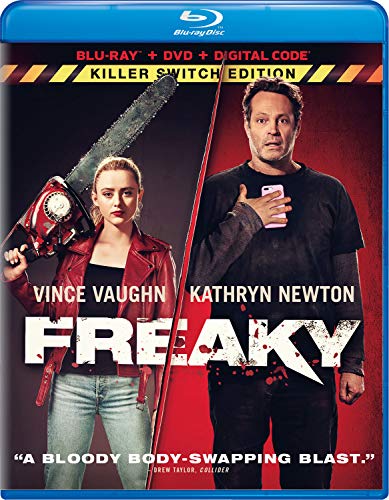 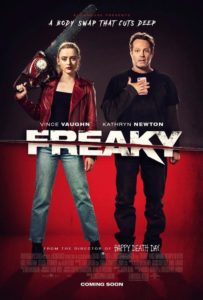 The film begins with four teenagers drinking alcohol and discussing the local urban legend of a serial killer known as the Blissfield Butcher (Vince Vaughn). Two of the teenagers go inside to get more to drink and are attacked by the Butcher. One is killed when the Butcher shoves a wine bottle down his throat and then breaks it, and then he kills the other by slamming her head into a toilet. Eventually, the Butcher kills the other two teenagers before taking an ancient dagger known as La Dola from the homeowner’s private collection.

The next day, the news of the teenagers’ murders reaches the ears of their fellow students at Blissfield Valley High School. Social pariah Millie Kessler (Kathryn Newton) is a student at the school that performs as the school mascot. Millie is constantly picked on by the other kids in school. She has only two friends, overtly gay Josh Detmer (Misha Osherovich) and African American Nyla Chones (Celeste O’Connor). She has a crush on football star Booker Strode (Uriah Shelton), but other than secretly giving him an anonymous poem, Millie fails to act on her feelings. Millie is in a state of depression after her father died the year before. Millie’s older sister Char (Dana Drori) has thrown herself into her work as a police officer to deal with her depression while Millie’s mother Coral (Katie Finneran) has turned to alcohol to numb her pain.

One night after a football game, Millie is left waiting in an empty parking lot for her mother to pick her up. Coral has drunk herself unconscious, so Char calls Millie to let her know that she will pick her up. Unfortunately, Millie’s phone dies in the middle of the phone call. Alone, Millie sees the Butcher in the parking lot with the La Dola dagger. Millie runs away, but the Butcher eventually catches her and stabs her in the shoulder. Some mysterious magic occurs, and an identical wound also appears on the Butcher’s shoulder as well. Char arrives and scares off the Butcher. The police collect the dagger as evidence and initiate a hunt for the Butcher.

The next morning, the Butcher and Millie discover that they have switched bodies. Millie struggles to control her much larger, stronger, and smellier body, while the Butcher takes advantage of his new identity to find new victims. After upgrading Millie’s wardrobe with some of Char’s clothes, the Butcher heads to school. Millie has the same thought and heads to the school for a shower. The Butcher blows off Josh and Nyla, and cozies up to Ryler (Melissa Collazo), one of Millie’s frequent bullies and the most popular girl in the school. The Butcher gets Ryler alone and then kills her by placing her in a cryotherapy tank in the girl’s locker room. Millie is the one who finds the body.

Millie encounters Josh and Nyla who recognize the Butcher’s body from his police sketch. Josh and Nyla fight Millie for a bit before she convinces them that she is really Millie in another body by doing the school mascot’s dance routine and answering their personal questions. Nyla and Josh research the La Dola and discover that Millie must stab the Butcher with the dagger by midnight or else they each will be stuck in their new bodies forever. At the same time, Millie kills the woodshop teacher Mr. Bernardi (Alan Ruck) by stabbing him in the neck with a screwdriver and then slicing his body in half with a table saw. Afterwards, the Butcher encounters Millie, Josh, and Nyla in the hallway of the school. However, the Butcher screams and feigns terror which draws the school security to Millie who is forced to flee the school with her friends.

As a result of the murders and the attack on Millie, the school cancels the homecoming celebration. The Butcher suggests to some of the football players that they hold a secret dance at the old mill, where the Butcher frequents often. The Butcher lures Booker into a monster mini golf course with the intent to kill him. However, Millie, Nyla, and Josh arrive just in time to save him. Millie knocks out both the Butcher and Booker. The trio takes the two unconscious forms back to Josh’s house where they tie up the Butcher and convince Booker that Millie is now in the body of the Butcher. They formulate a plan to acquire the dagger from the police evidence locker. Josh stays at his home to watch the Butcher.

At the police station, Nyla tricks Char into leaving so she can steal the dagger while Booker and Millie remain in Josh’s car and discuss their affections for each other. Booker and Millie kiss, but Millie asks Booker to continue the encounter again once she has her own body. Back at Josh’s, the Butcher escapes and proceeds to the police station to acquire the dagger for herself, now aware of what Millie is trying to do. Char catches Nyla trying to steal the La Dola and holds her at gunpoint. In the car, Millie sees the Butcher enter the police station and runs in after him. Char immediately turns her gun on Millie in the Butcher form, allowing the Butcher to grab the dagger and to get away in a police car. Millie overpowers Char when she attempts to lock Millie up in a holding cell.

The Butcher heads to the unofficial Homecoming dance at the abandoned mill. Three members of the football team isolate the Butcher and attempt to rape her. The Butcher kills all three of them, as well as a fourth who attempts to assault Josh, who arrives with Booker, Nyla, and Millie. As midnight approaches, Millie finds the Butcher and both Nyla and Josh hold him down while Millie stabs the Butcher with the La Dola. They each switch back into their original bodies just in time. The police arrive and shoot the Butcher, who survives.

A short time later, Millie and Booker kiss for a second time, this time in their proper bodies. The Butcher is taken away in an ambulance but manages to escape a few minutes later despite his multiple gunshots. The Butcher goes to Millie’s house. He attacks Millie, Char, and Coral and knocks Char and Coral unconscious. Millie kicks the Butcher in his genitals, knocking him to the ground. She then kills him by impaling him with a broken table leg.