Fred Claus is the older brother to Nicholas “Nick” Claus, the man that the world knows as Santa Claus. Fred has spent his eternal life living in the shadow of his utterly younger brother. Fred is jealous of his brother and grows tired of parents’ constant praise for Nick. However, when Fred needs Nick’s assistance in getting out of trouble and financing a new business deal, Nick gives Fred a job at his workshop at the North Pole. But Fred’s presence at the factory causes chaos and creates problems for Nick as he is being evaluated by government agents for efficiency. Can the brothers come together to not only save Nick’s workshop, but Christmas itself? 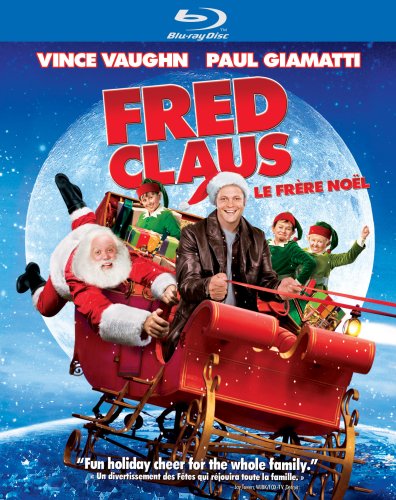 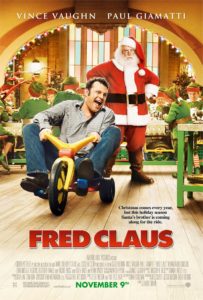 Frederick “Fred” Claus (Vince Vaughn) has always grown up in the long shadow of his younger and much more successful brother Nicholas “Nick” Claus (Paul Giamatti). The world knows Nick as Santa Claus. Nick’s selflessness and good will that he exhibits to the world have allowed him to become a saint, which gives both him and his family immortality. Fred carries an enormous amount of jealousy towards his brother and resents the fact that his parents, Papa and Mother Claus (Trevor Peacock and Kathy Bates), show preference towards their younger child. This resentment and jealousy have created a rift between the brothers.

While Nick has evolved into the modern-day Santa Claus, Fred has become a repossession agent in Chicago. Fred lives alone, but he befriends a young orphan boy named Samuel “Slam” Gibbons (Bobb’e J. Thompson). Fred’s luck continues to turn bad after his girlfriend Wanda (Rachel Weisz) breaks up with him, and Fred is arrested for impersonating a Salvation Army employee in an attempt to raise money for an illegal casino plan. Fred is forced to turn to his younger brother for bail and seed money. Nick agrees to provide the money as long as Fred visits the North Pole for the holidays and earns the money.

Fred is escorted to the North Pole by head elf Willie (John Michael Higgins). Nick places Fred in charge of assigning children to either the naughty or nice lists. At the same time, Nick is being evaluated by Clyde Northcutt (Kevin Spacey), an efficiency expert from the government agency that monitors activities of supernatural entities. Northcutt is looking for an explanation as to Nick’s dwindling performance on a three-strike assessment. Fred causes havoc in the workshop when he switches the radio from the traditional holiday music to some classic rock and roll, resulting in a spontaneous party. The lack of productivity results in Clyde giving the first strike.

A short time later, Fred attends a tense family dinner with Nick, Nick’s wife Annette (Miranda Richardson), and the boys’ parents. His parents’ constant gushing over Nick’s accomplishments causes Fred to storm out of the dinner. Meanwhile, Clyde secretly shreds children’s letters to Santa Claus and lays the blame on Fred. When the disappearance of the letters is revealed and lack of backup copies readily available, Clyde gives Nick a second strike. Fred continues at his task analyzing the naughty list. He notices that Slam is on the naughty list, but believes that the orphan boy is good kid whose bad behavior is just a consequence of being bullied at the orphanage. Fred places Slam and every other child in the world on the nice list.

Eventually, Nick learns about Fred’s decision and the brothers get into a fight. Nick ends up injuring his back, making it near impossible for him to deliver the world’s toys. Even worse, Fred’s actions make it impossible for the North Pole to produce enough toys for all the good children of the world. The elves begin to fall behind which causes Clyde to assign the third strike which effectively shut downs the workshop. Fred packs up his money and things and leaves. Nick gives him a gift before he leaves. Once he is back at home, Fred opens the present and discovers that it is a replica of a birdhouse he had as a child. Fred realizes that his little brother does care about him so he uses his seed money to make his way back to the North Pole to help Nick.

Nick is still recovering from his back injury, so he cannot deliver the world’s presents. Overcome with guilt, Fred decides to deliver the presents himself. Before he leaves, he reminds Nick that there are no bad kids, only bad situations, and that every child deserves a gift on Christmas. Fred has the elves make simple gifts so that every child gets a toy. Fred and Willie begin to deliver the gifts but Clyde sabotages their efforts again. Nick realizes that Clyde was bullied as a child, which has led to his troubled behavior. Nick apologizes to Clyde for always putting him on the naughty list and gives him the Superman cape he always asked for as a child.

Back in Chicago, Fred visits Slam disguised as Santa. Fred gives him the dog he wanted for Christmas. Fred tells Slam to become a better person. With every gift delivered and his sack empty, Fred returns to the North Pole where he makes amends with his little brother. Clyde has a change of heart and begins working at the North Pole. Slam is eventually adopted by a loving family, and Fred repairs his relationship with Wanda. A year later, the whole Claus family is happily reunited for Christmas.