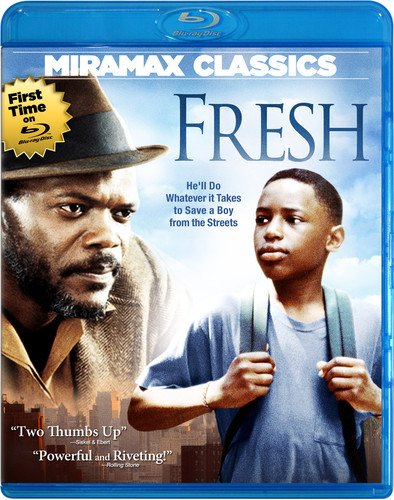 Echo Bridge Entertainment has announced that it will bring the drama Fresh to Blu-ray this May. The film is written and directed by Boaz Yakin and stars Sean Nelson, Giancarlo Esposito, Samuel L. Jackson, and N’Bushe Wright.  Fresh will be available in stores on May 7, 2013.

Michael (or Fresh as he’s well known) is a 12-year-old drug pusher who lives in a crowded housing project with his cousins and aunt.  His father has become a street bum, but still meets with Fresh on occasion to play chess.  Fresh is rather quiet in a crazy world.  Fresh’s sister is a junkie who sleeps with the dealers who Fresh sells for.  As the story progresses Fresh realizes that he doesn’t want to sell drugs anymore, he wants out.

Fresh was released in August of 1994 and grossed over $8 million at the box office.  Exact technical specs and supplemental features to be included with this upcoming release are yet to be officially detailed.

Disclaimer: Affiliate links are contained in this post. This means when you click a link, and purchase an item, Movie House Memories will receive an affiliate commission. Advertisers and Affiliate Partnerships do not influence our content. See our Terms of Use about the inclusion of affiliate links on this site for more information.
February 7, 2013
1 minute read
Show More
Back to top button
Close
Close