Two months after the horrific events of the first film, Alice Hardy, the only survivor of the Camp Crystal Lake murders is mysteriously murdered by an unknown killer. Five years later, Paul Holt opens a counselor training center at Packanack Lodge near the old Camp Crystal Lake. The new group of counselors ignore the urban legends of Jason Voorhees and the warnings from Crazy Ralph. Soon after, the counselors begin to disappear one by one again, and everyone begins to wonder, if Pamela Voorhees is truly dead, who has resumed the killing? 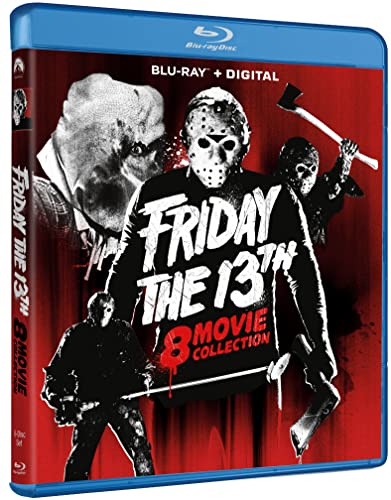 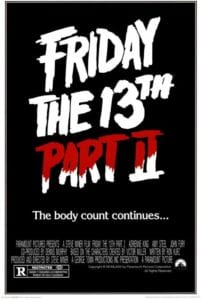 Roughly two months after the events of the first film, Alice Hardy (Adrienne King), the sole survivor of the multiple murders at Camp Crystal Lake committed by Pamela Voorhees (Betsy Palmer), is still recovering from her traumatic experience. She suffers from nightmares and keeps to herself. After talking with her mother on the phone, Alice goes to the refrigerator to get her cat some food and finds the severed head of Pamela Voorhees inside. Suddenly, an unknown person grabs Alice and shoves and ice pick into the side of her head, killing her.

During their first night, Paul tells the counselors about the legend of Jason Voorhees and the events five years earlier at Camp Crystal Lake. The legend states that Jason survived his drowning and grew up living in the woods around the lake. Paul tells them that Jason now seeks to kill any intruders to the lake area to avenge the death of his mother, who was decapitated by Alice in the first film. The tension of the story is suddenly intensified when Ted jumps out with a mask and a spear and scares the counselors in training. Paul breaks the mood and tells them that it is merely a ghost story, but he does inform everyone that Camp Crystal Lake is condemned, and they are to avoid that area.

That night, the town looney Crazy Ralph (Walt Gorney) sneaks into the camp either to spy on the young counselors or to warn them of danger. However, Ralph is killed by an unknown killer when he is garroted from behind. At the same time, Terry goes looking for her dog, Muffin, but is unable to find her. The next day, Jeff and Sandra sneak off to Camp Crystal Lake when Sandra wants to explore it. Along the way, they encounter the dead carcass of some dead animal. Deputy Winslow (Jack Marks) finds the couple and takes them back to Paul. The deputy tells Paul that the next time they are found trespassing that they will be arrested. On his way back to town, the deputy sees someone in a burlap sack running across the road and chases the person into the forest. The deputy finds a run-down shack and begins exploring it before he is killed with the claw of a hammer.

Back at the camp, Paul offers to take everyone into town for one last celebration before their training begins. Jeff, Sandra, Terry, Mark, Scott, and Vickie stay behind while everyone else goes into town. At the bar, Ginny pontificates that if Jason survived the drowning and witnessed his mother’s death that he might not see a distinction between life and death, or right and wrong. Paul tells her that Jason is merely an urban legend and has no basis in reality.

Meanwhile, the mysterious killer returns to the camp and continues his killing spree. Terry goes skinny dipping in the lake and Scott takes her clothes. He leads her on a chase into the woods until he is caught in a rope trap. Terry goes to get a knife to cut him down, but the killer emerges while she is gone and slits Scott’s throat. Terry is killed later after she finds Scott’s body still hung in the tree. Vickie and Mark begin flirting with each other, but Mark is killed by a machete to his face before he can make the moves on her. Jeff and Sandra have sex with each other and are enjoying a post coitus cuddle when the killer drives a spear through both of them at the same time. Vickie finds their bodies and is killed by the murderer with a kitchen knife.

Ginny and Paul return from the bar, having left jokester Ted behind, who will ultimately survive the carnage. They find the cabins in disarray and the lights turned out. The killer jumps out and knocks Paul unconscious. He then chases Ginny throughout the camp and into the woods.

Eventually, Ginny finds the run-down shack in the woods and tries to hide in it. She finds an altar with Pamela Voorhees’ head on it inside, surrounded by a pile of bodies, including Alice’s from the beginning of the film. Ginny realizes that the unknown killer is the grown-up Jason Voorhees (Steve Daskewisz). Ginny hears Jason breaking through her make shift barricade and puts on Mrs. Voorhees’ sweater and tries to convince Jason that she is his reincarnated mother. Jason is initially confused, but when he sees his mother’s head on the altar, he realizes it is a ruse and attacks Ginny again.

Paul reappears and attacks Jason to save Ginny. However, Paul is quickly overpowered by the murderer. Jason picks up a pickaxe and prepares to kill Paul with it when Ginny uses the machete to cut into Jason’s shoulder. Jason falls to the ground, seemingly dead from the wound.

Paul helps a wounded Ginny return to the camp cabins. While Paul is trying to patch up Ginny, the couple hears a noise outside the cabin door. They believe that Jason has returned and prepare to defend themselves. However, they only find Terry’s dog Muffin outside the door when they open it. As they laugh it off, Jason suddenly reappears, crashing through the cabin window and grabbing Ginny.

Ginny awakens later as she is being loaded into an ambulance. She calls out repeatedly for Paul but he is not shown on screen. The fate of Paul and Jason is left unknown as the film ends. Back at the shack, Mrs. Voorhees’ head sits on the altar.