A carefree summer becomes a deadly nightmare for another group of naïve counselors who choose to ignore Camp Crystal Lake’s gruesome legacy. They find themselves in a bloody game of cat-and-mouse with the maniacal Jason who stalks their every move…and ruthlessly kills them off one-by-one. 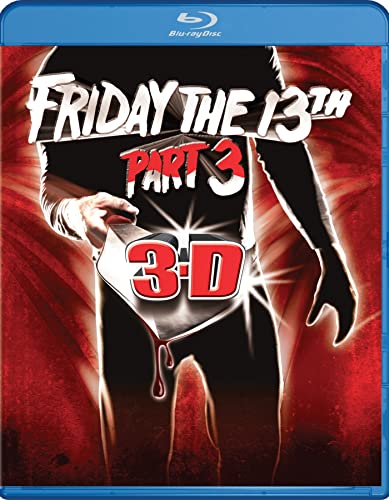 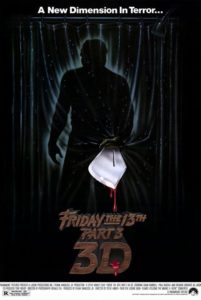 The year was 1982. E.T. phoned home… without using an iPhone or an intergalactic cellular plan. Indiana Jones pissed his pants in a room full of snakes before an island full of Nazis had their faces melted off by the wrath of God. Schwarzenegger and Stallone introduced us to Conan and Rambo, respectively, and we are still trying to figure out how these two never became expendable. It was the year where teens everywhere learned they were not as horny as the high schoolers in Porky’s or Judge Reinhold, who cranked one out while fantasying about Phoebe Cate’s bare breasts. In the middle of all these historical cinematic moments, Paramount Pictures presented a horror film that literally jumped off of screens, while causing us to fear ice hockey goalies who play the puck with a spear gun in hand. This infamous film was titled FRIDAY THE 13TH, PART 3. And this time, the real horror was that it was presented to audiences in 3D.

The assholes who produced and released FRIDAY THE 13TH 3D should have put a giant SPOILER ALERT at the beginning of this flick because it starts with the last five to ten minutes of FRIDAY THE 13TH, PART 2, giving away the entire ending, including the fact that Jason Vorhees is alive and crawling around the Crystal Lake region. They pulled the same stunt at the beginning of Part 2, but then continued on with the same principal character. This time, we are told to forget about everyone from Part 2 except our antagonist and his mother’s severed head. So, Jason butchers a husband and wife who operate a filthy general store Crystal Lake, but they are easy to distain because the wife bitches and moans the entire time she is on screen and the husband is a disgusting pig who can’t wipe is butt after using the toilet.

From there, five college aged kids and one couple who are living the Cheech & Chong lifestyle hop in a van to spend a weekend at a cabin on Crystal Lake. Chris, the van driver and cabin owner, is returning to the woods for the first time in over a year, since she was attacked by a grotesque creature that eerily resembled The Elephant Man. She’s also looking to reconnect with her old flame, Rick, but doesn’t care that he has the personality of The Elephant Man. Chris’ closest friends, Andy and Debbie, are a beautiful pair of humans, who constantly bang like bunny rabbits and have a bun in the oven to show for it. When Andy isn’t shagging with Debbie in their hammock of love, he is walking around the cabin on his hands so the blood will rush to his other head, for a change. Andy’s doughboy roommate, Shelly, tags along for the weekend, but is constantly annoying the entire gang with fake suicide and homicide stunts. Shelly’s only redeeming value is that he sacrificed his own life so Jason Voorhees could obtain the goalkeepers mask, which would become an iconic piece of horror movie folklore. Oh, Shelly also used the Kevin Bacon’s yellow Volkswagen Beetle to run over a pair of motorcycles owned by a biker gang who were terrorizing him and Chris’ friend Vera. These bikers would try to get their revenge on Shelly, but more on them later.

Now that we have the cast of characters all lined up, here is how the legendary Jason Voorhees systemically eliminated his victims like Joey Chestnut devoured hot dogs on July 4th. While Ali, the leader of the biker gang, gives a blow job to the gas tank on Chris’ van, Jason kills Ali’s girlfriend, Fox. Poor Foxy was playing around in the nearby barn and Jason mounted her to the rafters with a pitchfork to the throat. Ali’s partner in crime, Loco, heads into the barn, smoking an unlit cigarette, on a Fox hunt. However, Loco is introduced to Jason’s murderous ways via a pitchfork to the guts. Ali enters the barn, only to be treated like Mike Tyson’s punching bag by Jason. Later in the evening, Shelly tries to get into Vera’s pants by seducing her in his scuba gear, while wearing the previously mentioned hockey mask. Vera rejects Shelly’s nerdy, Fangoria way of life, which sends Shelly wondering towards a shadowy figure in the barn. The figure will eventually slash Shelly’s throat, then don the hockey mask to cover up decades of untreated acne and gingivitis. Jason, posing as a taller, slimmer, more homicidal version of Shelly, shoots Vera in the eye with Shelly’s spear gun, then drops the weapon in cold blood, a al Michael Corleone in The Godfather.

Now we get the gory parts of the film. After Andy and Debbie fornicate in an indoor hammock, the luscious Debbie takes a post coitus shower, stimulating everyone in the audience. However, Jason ruins everything when he uses a machete to chop Andy from his nuts to his sternum, while Andy walks down the hall on his hands. Then Jason really pisses off the audience when he pierces Debbie, from back to front, with the machete, ruining her gorgeous body and a very durable hammock. When the lights mysteriously go out in the cabin, Chuck, the Tommy Chong wannabe, goes to the cellar to check the fuse box. Jason provides Chuck with an all-time high by electrocuting Chuck with the fuse box. Jason then turns his attention to Chuck’s girlfriend, Julie, and puts a red hot fireplace poker through Julie’s guts.

Chris and Rick return to the cabin to find everyone dead and the cabin under attack by gale force winds. Jason quiets Rick forever by giving him a skull crusher, popping his eyes out of his head. Voorhees them comes for Chris, who puts up a fight that would make the Real Housewives cast envious. Chris stabs Jason in the hand, chest, and leg, before trying to escape in her van. Little did Chris know, Ali emptied the gas out of her primary gas tank and the van gets stuck on a small bridge. Jason attacks Chris and chases her into the barn. The hockey masked murderer locks them into the barn, but is knocked out, then hung by Chris, who used a hay pulley to try and kill her attacker. Jason gets himself free and tries to chop Chris into small pieces. Chris is saved by Ali, who has miraculously come back to life. Jason chops Ali into pieces, then takes an axe to the head by Chris. Jason drops to the barn floor, seemingly dead forever. Chris takes a row boat to the middle of Crystal Lake. A nightmare of Jason coming after her wakes her up from a deep sleep. Chris paddles her way back to shore but is attacked and dragged underwater by Mrs. Vorhees’ dead corps.

We cut to a group of police officers helping a traumatized Chris get into the back of a squad car. Jason’s “dead” body is still laying on the barn floor, with the axe securely planted in his skull. Ripples form on Crystal Lake, an indicator that more terror may be on its way.