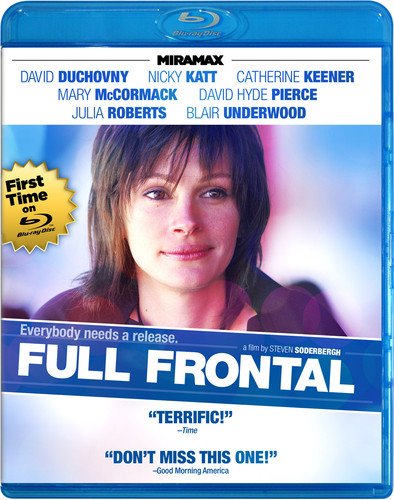 Echo Bridge Entertainment has announced that it will bring the romantic comedy Full Frontal to Blu-ray this May. The film is directed by Steven Soderbergh, and features an all-star cast that includes Julia Roberts, David Duchovny, David Hyde Pierce, Blair Underwood, Catherine Keener, Mary McCormack, and Jeff Garlin.  Full Frontal will be available on Blu-ray for the first time on May 7, 2013.

The film, based on a screenplay by Coleman Hough, is an arty film-within-a-film revolves around seven people with little in common whose lives collide.  The story is told in the loose structural style and narrative ambiguity of the French New Wave, and it received critical notice for this style.

Full Frontal was released in August of 2002 and grossed over $2 million at the box office.  Exact technical specs and supplemental features to be included with this upcoming release are yet to be officially detailed.

Disclaimer: Affiliate links are contained in this post. This means when you click a link, and purchase an item, Movie House Memories will receive an affiliate commission. Advertisers and Affiliate Partnerships do not influence our content. See our Terms of Use about the inclusion of affiliate links on this site for more information.
February 6, 2013
1 minute read
Show More
Back to top button
Close
Close