Director Stanley Kubrick rips the skin from the face of war to expose the dehumanizing effect of the military on the people fed to its emotional meat grinder in Full Metal Jacket. Through the eyes of an 18-year-old recruit–from his first days in the seeming hell of Marine Corps boot camp as his superiors try to strip of him his individuality and re-create him as a Marine, to the hell of the 1968 Tet offensive, Kubrick reveals the damage done to the collective human soul by the inhumanity of war. Based on the novel The Short-Timers by Gustav Hasford. (Courtesy Warner Bros. Pictures) 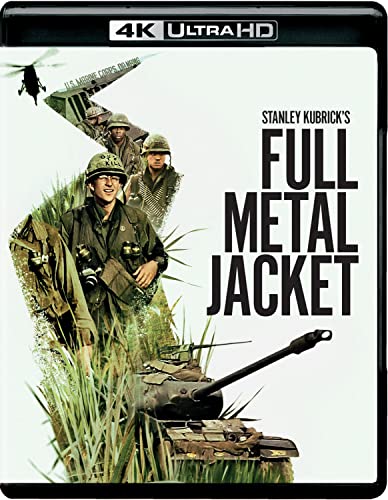 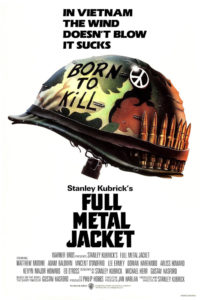 Full Metal Jacket begins with new Marine recruits getting their heads shaved at the start of their basic training on Parris Island. Drill Instructor Gunnery Sergeant Hartman (R. Lee Ermey) greets the men and tells them they will all hate him soon enough but he will treat them all equally, no matter their background.

Hartman then goes to each man to test their mental fortitude… giving them nicknames as he passes to strip away their old identities and mold them into killers. He named J. T. Davis (Matthew Modine) Joker after he smarts off to him. Private Evans (Arliss Howard) is from Texas and he starts calling him Cowboy, and the dim-witted recruit, Leonard Lawrence (Vincent D’Onofrio) he calls Gomer Pyle. Pyle immediately gets under Hartman’s skin because he can not follow instructions, is overweight, and can’t keep up physically with the other recruits.

One night during hand and foot inspection, Hartman finds Pyle’s footlocker is unlocked and he flips his wig. He inspects the locker to see what’s missing and finds jelly donut contraband. Not only is food banned in the Barracks, but Hartman’s forbidden Pyle to eat junk food as he’s overweight to begin with. Instead of punishing Pyle, he punishes the entire squad while ordering Pyle to eat the donut. From here on, Hartman will punish all the other recruits anytime Pyle messes up.

Obviously, this makes the other recruits hate Pyle and a few nights later, they attack him with soap bars wrapped in towels while Cowboy gags him and a few others hold him down on his bunk by his blanket. Cowboy peer pressures Joker into hitting him with soap as well. While reluctant at first, Joker pounds on Pyle longer and harder than the others. After the beating, as Pyle cries out in pain, Joker covers his ears… partially because he’s ashamed at himself for participating.

This event causes Pyle to completely break mentally. On the outside, it appears he becomes an exceptional marksman, but Joker overhears Pyle’s talking to his rifle. He tells Cowboy Pyle is a Section 8… mentally unfit to serve. Through thick and thin though, all the recruits, even Pyle graduate. Hartman gives them their new assignments in Vietnam.

On their final night, Joker is the night watch, and he finds Pyle alone in the Head… and everything comes to a head there. He catches Pyle loading his rifle while reciting the Rifleman’s Creed over and over. As Joker stands there in fear and uncertainty, Hartman shows up. Joker tells him Pyle has a full metal jacket in his rifle, and Hartman tries to disarm the situation. Pyle shoots and kills Hartman before killing himself.

A year passes and Joker is in Da Nang where he reports on the Vietnam War for the military newspaper Stars and Stripes. He and his combat photographer, Rafterman (Kevyn Major Howard), meet a prostitute (Papillon Soo) working the streets when a thief (Nguyen Hue Phong) steals Rafterman’s camera. As the men walk back to their base, Rafterman laments that the U.S. is there to help the South Vietnamese but they respond by taking advantage of the soldiers.

Back at the base, their commanding officer, Lieutenant Lockhart (John Terry), reviews all the reporter’s latest stories with his staff. Joker wants to go to the front lines for a good story and thinks the Viet Cong will break the Tet holiday ceasefire. Lockhart balks at the news and thinks the Vietnamese will have their holiday with no issues.

That evening, Rafterman tells the other reporters that he wants to go into combat like Joker. Another reporter makes fun of Joker because he knows Joker has never been in combat as he doesn’t have the “thousand-yard stare”. Suddenly, artillery fire hits their base as the North Vietnamese Army attempts to overrun it as part of the beginning of the Tet Offensive. Joker and the other GIs successfully defend the base, but it wasn’t hit as hard as other locations in the country.

The next day, Lockhart tells his staff about enemy attacks throughout South Vietnam. When Joker smarts off, Lockhart sends him to an operating-base near the city of Hue where he will cover the combat taking place there. Rafterman, still looking for combat experience, requests to join Joker. Lockhart approves to the request.

During the helicopter ride over, the two men are horrified to watch the crazed door gunner indiscriminately shoot at the unarmed Vietnamese civilians on the ground. Once they land outside Hue, Joker and Rafterman track down Cowboy and his squad. Joker accompanies them to a battle in the city. As they approach the ruins under tank cover, several mortar rounds land in front of them. One kills the squad’s commanding officer, Lieutenant Touchdown (Ed O’Ross). With him gone, Crazy Earl (Kieron Jecchinis) takes command, and the group is able to stave off the enemy.

Days later, in some more ruins, Crazy Earl comes across a toy rabbit in one building. When he picks it up, it triggers a booby trap that kills him, and command promotes Cowboy to squad leader. However, the squad soon becomes lost among the ruins. When Eightball (Dorian Harewood) scouts the buildings ahead, an unseen sniper (Ngoc Le) shoots him. Doc Jay (Jon Stafford) then tries to drag Eightball to safety, but the sniper hits him too.

The sniper doesn’t kill the wounded men, instead attempting to draw more of the squad into shooting range. With no tank support available, their M-60 machine gunner, Animal Mother (Adam Baldwin) ignores Cowboy’s order to withdraw. He heads to the buildings to locate the sniper, and when he does, the remaining squad goes to help.

When the sniper shoots and kills Cowboy through a hole in one of the buildings, Animal Mother assumes command. He says, “Let’s go get some payback,” and the squad enters the building under the cover of smoke grenades.

Joker finds the sniper on an upper floor, but his rifle jams as he tries to kill him. The sniper turns around to reveal “he” is a teen-aged girl. She opens fire with her automatic rifle, pinning him behind a column. In a panic, Joker drops his rifle and pulls out his sidearm, but he’s unable to shoot back. Rafterman arrives and shoots the sniper, rendering her helpless.

Animal Mother and the remaining squad arrive. They surround girl, who will not survive, but is unable to die. She tells the men to shoot her. Animal Mother wants to leave the girl to the rats, but Joker says they have to do something. He says Joker can shoot her if that’s his attitude. With much hesitation, Joker shoots her with his sidearm. As the men sarcastically congratulate him on his first kill, Joker gives the “thousand yard stare” all fighting men get.

In the final scene, the squad marches on through the ruined buildings. As the their burning hulks light up the night sky, the men sing the Mickey Mouse March. Joker says that even though he’s in a world of shit, he’s glad to be alive, and is no longer afraid.