Strange meteorites hit the planet around Japan. One large meteorite lands near Mount Kurodake while Princess Salno jumps from a plane over the ocean just prior to an explosion that destroys the plane. Miraculously, Salno survives but has no memory of her former life and claims to be from the planet Venus. She begins predicting a series of catastrophes around Japan including the devastating return of both Rodan and Godzilla, as well as predicting the arrival of King Ghidorah, the three-headed monster who could destroy the Earth. 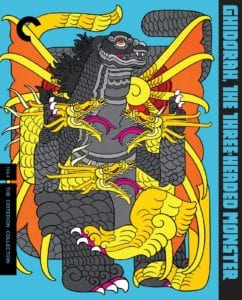 Ghidorah, the Three-Headed Monster begins with fringe reporter Naoko Shindo (Yuriko Hoshi) attending a communication session with the UFO society. The society witnesses a sudden meteor shower descending on Japan, with the largest crashing in Mount Kurodake. Naoko’s brother, Shindo (Yosuke Natsuki), is a police detective who is assigned to guard Princess Mas Dorino Salno of Selgina (Akiko Wakabayashi) when she arrives in Japan from her native land. Princess Salno is traveling to Japan due to a plot to kill her in her home country. While Salno is in route to Japan, an alien entity takes control of Salno’s mind and leads her to jump out of the plane just before the assassin’s bomb explodes, destroying the plane.

Meanwhile, Professor Miura (Hiroshi Koizumi) leads a research team to Mt. Kurodake to investigate the large meteorite that landed in one of the mountain’s valleys. The research team discovers that the meteorite randomly emits magnetic waves. At the same time, Naoko is sent by her producer to investigate a prophetess claiming to be from Venus. The prophetess is Princess Salno, although she appears to not remember who she is. Salno predicts that Rodan will emerge from Mount Aso in a few days.

Salno’s reemergence in one piece, catches the attention of both Detective Shindo and Salno’s uncle. Shindo attempts to track her down to verify her identity, while Salno’s uncle dispatches an assassin, Malmess (Susume Kurobe), to kill her. A short time later, Rodan emerges from Mount Aso just as Salno predicted. Salno next appears on the docks next to ship that is scheduled to take Mothra’s twin fairies, the Shobijin (Emi Itô and Yumi Itô), back to Infant Island. Salno’s warns the ship passengers not to leave the dock. The ship’s captain leaves anyways.

Naoko is at the dock and takes Salno’s back to a hotel room to interview her. Malmess is staying at the same hotel and sees Salno enter Naoko’s room. In the room, Naoko and Salno discover that the Shobijin have followed them to the hotel room, which is fortunate for them since the ship they were to travel on is destroyed by Godzilla while in route to Infant Island, just as Salno predicted. Detective Shindo arrives at the hotel and saves Salno from being killed by Malmess. He confirms that the prophetess is in fact Salno.

Detective Shindo takes his sister and Salno out of town to see a psychiatrist, Dr. Tsukamoto (Takashi Shimura). Meanwhile, Godzilla and Rodan both converge on the city and battle throughout the countryside near Dr. Tsukamoto’s lab. The doctor determines that Salno is normal, but she doesn’t have her own mind. Salno tells the doctor that King Ghidorah has arrived on Earth, and that she is from Venus. She further informs him that her home on Venus was destroyed by Ghidorah and that the surviving members of her race fled to Earth thousands of years before. The people of Venus assimilated with humans, resulting in them losing their abilities with the exception of their premonitions.

Meanwhile, Miura’s team witnesses the meteorite explode and release King Ghidorah. The golden three-headed space dragon proceeds to attack Matsumoto City. The Ministry of Defense pleads with the Shobijin to summon Mothra for help, but they warn the citizens of Japan that Mothra cannot defeat King Ghidorah alone. The Shobijin state that the world’s only hope is for Mothra, Godzilla, and Rodan to team up and battle Ghidorah together. The Shobijin summon Mothra to Japan, and she proceeds to try to convince Rodan and Godzilla to stop fighting each other and start fighting Ghidorah. The two monsters refuse to help Mothra, but change their minds after seeing Mothra take on the larger Ghidorah on her own.

At the same time, Malmess learns of Salno’s whereabouts at Tsukamoto’s lab. He once again tries to kill her there, but she is saved again by Detective Shindo. When the monster battle approaches the lab, Shindo evacuates everyone to safety. Salno and Detective Shindo become separated from the rest of the group. Malmess makes one final attempt at killing Salno by trying to shoot her while she and Shindo are trapped on a ledge. Both Shindo and Salno are shot, but not mortally wounded. The monster battle causes an avalanche that kills Malmess. The bullet grazing her head restores Salno’s memory.

Meanwhile, the trio of heroic monsters overwhelm Ghidorah and force it to flee into outer space. Prior to departing for home, Salno reveals to Shindo that she doesn’t recall her recent memories as the prophetess but remembers the three events when Shindo saved her and thanks him. At the same time, Godzilla and Rodan watch as Mothra returns to Infant Island with the Shobijin on her back.