In Ghost World, Enid and Rebecca are recent high school grads on the outside of life looking in. As fake ’50s diners and Starbucks-like coffee houses slowly take over their town; the two try to adjust to their new adult lives. Enid attends a remedial art class to officially graduate high school, and Rebecca gets a job. When the two prank a man who placed a personals ad, Enid finds a fellow soul, and the two girls begin to drift apart. 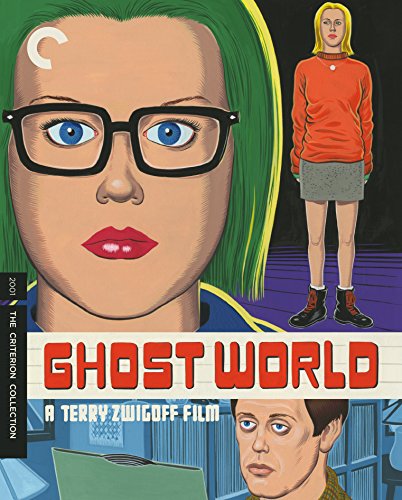 Ghost World begins with Enid (Thora Birch) and Rebecca (Scarlett Johansson) graduating high school. Well, Rebecca has fully graduated. As Enid looks at her diploma, she finds a note attached to it that her graduation is contingent on her passing a remedial art class during summer school. The girls’ plan since seventh grade has been to skip college, and move in together upon graduation. However, that means they must find jobs to pay for that plan.

Both girls have problems relating to other people, and they spend their time finding freaks, sickos, and the weirdos of society to follow, mock, and pester. While they have great distain for anything that is mainstream, Rebecca, is fairly popular with boys, and seems to be adjusting to their new life much better. While there’s a possibility that the two might be lesbians, they might not be as well. So who knows?

Enid constantly draws things in her notebook which she observes in her daily adventures. We learn she’s is a talented artist, but that anti-social attitude of hers has landed her in that remedial art class. Her art teacher, Roberta (Roberta Allsworth), thinks that all art must be socially meaningful which Enid’s is not. She dismisses Enid’s sketches as nothing more than light entertainment.

One day, while sitting at a diner, Enid spies on and sketches an older couple she thinks are satanists. Rebecca shows up, and the two follow them around for a bit. They lose track of the couple, but spot a new ’50s style diner that’s just opened with a jukebox that plays modern rap. Their waiter’s name is Allen (Ezra Buzzington), and Enid dubs him Weird Al because his hair is long, and he looks weird to her.

Later, for shits and giggles, the girls decide to respond to one of those “I Saw You” personal ads just so they can see what kind of loser would place an ad like that. Enid pretends to be the woman mentioned in it, and calls him. She invites him to meet her at the new ’50s diner… and to wear that green cardigan she likes him in.

The next day, the girls go to the Sidewinder Mini Mart where their quiet friend, Josh (Brad Renfro) works. While the girls enjoy teasing him, they are also both attracted to him. There’s an implied love triangle with them that Josh may or may not be aware of, but once again it’s still possible that the girls might be lesbians. So who knows?

At the end of Josh’s shift, the girls pester him into driving them to the diner even though they can walk. The three arrive first, and get a booth so they can secretly watch the unknown man nervously sit alone while his “date” stands him up.

The person who does show up is a lonely, middle-aged named Seymour (Steve Buscemi). As as he sits there drinking a giant glass of milk—wait—it’s a vanilla milkshake; the girls giggle and make fun of him. Enid sketches the dork while Josh sits there uncomfortable as he never wanted to be there in the first place.

However, actions have consequences, and Enid begins to sympathize with Seymour. The girls follow him to his apartment complex where they later find him selling vintage records at a garage sale. When Enid buys an old blues album from him, she finds in Seymour a fellow soul who beats to his own drummer too, and they become friends. (Although Enid never admits to him that she and Rebecca were responsible for answering that ad.) Enid makes it her personal goal to find women for him to date. By the end of the summer, he’s going to be up to his neck in pussy.

While this story evolves, Enid also attends her remedial art class. She persuades Seymour to lend her an old poster depicting a racist caricatured of black man from a 1920s Coon Chicken franchise. Nowadays, it’s known as Cook’s Chicken, but it still sells the same delicious fried chicken it always has. Seymour has worked there for them for 19 years. Enid uses the poster in class as a social comment about evolving racism over the decades. This is so socially meaningful to Roberta that she gets Enid a one-year scholarship to an art college.

Meanwhile, Seymour receives a phone call from a woman named Dana (Stacey Travis). She was the original subject in his personal ad. Although it’s a month after the fact, she just got out of a relationship, and decided to call Seymour. Enid encourages him to meet her, but when things go well during their first date, she starts to become surprisingly jealous.

As time passes, friction builds between Enid and Rebecca, and the girl’s lives diverge. Enid, either consciously or subconsciously, begins to alienate everyone around her, including her father, Rebecca, and eventually Seymour. Rebecca starts working at a coffee shop for money, and Enid gets a job at a movie theater so she can afford to rent an apartment with Rebecca, but her cynical attitude gets her fired on her first day. While looking for apartments, the girls argue because all the places are too mainstream for Enid. Frustrated, Rebecca decides not to live with her and finds a place of her own.

The last day of Enid’s remedial class is an art show. When Roberta displays Enid’s poster, parents, school officials, and society at large find it so offensive they force Roberta to remove it and fail Enid. That means Enid doesn’t graduate high school, and can not accept the scholarship.

Since she can’t go to Rebecca, Enid turns to Seymour for one person to be nice to her. It results in a drunken one-night stand where Enid says she wants to live with Seymour. However, Seymour is still dating Dana; albeit unhappily dating her as their interests are vastly different.

When he wakes up the next morning, Enid is gone, but he breaks up with Dana anyhow. At work, his boss calls him into his office to ask if he knows anything about the Coon Chicken poster that his making waves in the a local newspaper.

Seymour unsuccessfully tries to contact Enid, but she ghosts him completely. He tracks down Rebecca at her new apartment to see if Enid is there. Although she agreed to let Enid move in with her after Enid pushed Seymour away, she’s three hours late, and Rebecca doesn’t know where she is.

Annoyed with the entire situation, Rebecca tells Seymour about Enid’s prank phone call, describing the way they mocked him at the diner, and shows him Enid’s drawing book with her sketch of him that day.

Upset and betrayed, Seymour goes to the Sidewinder Mini Mart where Josh is working. He confronts the only person who felt the prank was wrong that day and didn’t want to be there in the first place. Also at the Mini Mart is their resident loiterer named Doug (Dave Sheridan). He and Seymour wind up fighting which results in Seymour getting injured and hospitalized. Enid finally shows up at the hospital to apologize.

During the film, Enid has watched a senile old man named Norman (Charles C. Stevenson Jr.) continually wait at an out-of-service bus stop for a bus that will never come. He’s the one constant left in her life she can count on. However, while walking alone that evening from her hospital visit, Enid pauses when she’s across the street from that out-of-service bus stop. She watches with amazement as an empty, unmarked bus pulls up. Norman boards it; never to be seen again.

Enid and Rebecca wind up going their separate ways, but say they will get together sometime. Seymour finishes a session with his new therapist as his elderly mother arrives to take him home. Enid, unable to cope with reality, decides to ghost the world. With her childhood fantasy of running away forever on her mind, she packs one bag, returns to that out-of-service bus stop, and boards the empty, unmarked bus when it arrives for her. It drives off into the twilight as the film comes to a close.

Since this based on a comic, there must be a post credit scene, right? Yep! In a post-credits scene, we see an alternate version of Seymour’s fight at the Mini Mart where he beats up Doug and storms triumphantly out the doors.

User Rating: Be the first one !
May 25, 2020
6 minutes read
Show More
Back to top button
Close
Close