Frank Murdoch is loveless, jobless, and possibly terminally ill. Life in America has beaten him down to the point he just doesn’t care anymore. With nothing left to lose, Frank picks up a gun and and begins killing the stupidest, cruelest, and most repellent members of society. As he commits his first murder, a 16-year-old girl named Roxy witnesses it. She too shares his sense of rage and disenfranchisement, and decides to tag along. Together they go on a killing spree to rid the US of A from the dregs of society! 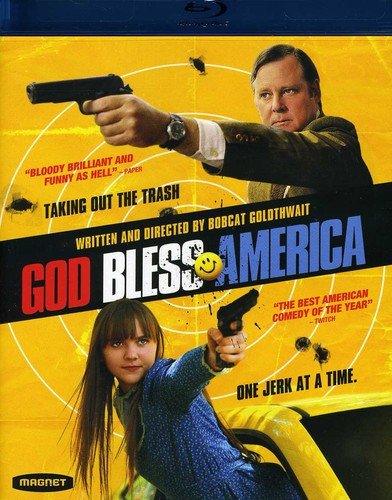 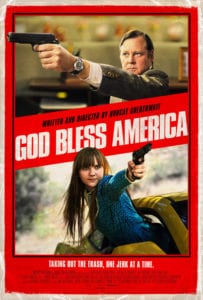 God Bless America begins with Frank Murdoch as a 40-something man who hates what ‘Murica has become; a rude, pop-culture dominated society that has long since lost its civility, and he longs to do something about it. He teeters on the edge of sanity, but eventually, three major events push him over the edge. His wife divorces him. His boss fires him for sexual harassment; stemming from a kind gesture towards a female employee, and finally his diagnosis of a terminal brain tumor.

Roxy, a classmate of Chloe, witnesses her murder. Roxy tracks Frank down at a motel, and interrupts his next suicide attempt. When Frank explains to Roxy that he only wants to kill people who act cruelly towards others for their own personal amusement, the two decide to go on a killing spree that takes them cross country.

Eventually, after many murders, Roxy wants to “go legit” by moving to France, and live a normal life. Frank doesn’t agree to this because he knows his brain tumor will soon kill him, but his doctor leaves Frank a message asking to talk to him. The good doctor tells him that he diagnosed the wrong Frank, and he isn’t going to die from a tumor.

Frank cheers up a bit, but then he sees a report on the news about a missing girl. The worried parents are Roxy’s parents, and Frank learns Roxy isn’t who she appears to be. Angry, Frank lets Roxy know he knows the truth, and steals the truck of a man he just killed; leaving Roxy his other car to drive wherever she wants to go.

Frank heads to Hollywood where he plans on killing as many of the cast, crew, and fans of the television show, American Superstarz, as possible. He buys an AK-47, and drives to the studio. Frank makes it to the main stage on live TV, and kills the main judge. As he holds the remaining judges and audience hostage, a SWAT team, from the balcony above, surrounds him.

Roxy runs out of the crowd, and joins Frank on stage. Frank tells Roxy she is a pretty girl, and hands her the AK-47. He pulls out another gun, and the two begin shooting everyone. The dynamic duo go out in a blaze of glory as the police gun them down.