Journalist Steve Martin is in route to Cairo for an assignment when he stop off in Tokyo for a personal visit. While there, the local media begins to report on strange happenings at sea with ships being destroyed and entire crews being lost. Steve decides to investigate and travels to a remote Japanese island where he encounters a gigantic prehistoric beast, dubbed Godzilla, which has apparently been awakened by H-bomb testing. Godzilla soon appears in Tokyo harbor but several attempts to destroy it fail and the city is destroyed. The only remaining hope is a new weapon that maybe more destructive than Godzilla himself. 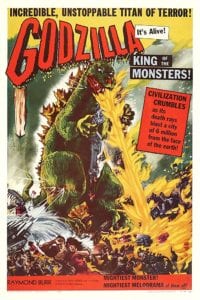 Godzilla, King of the Monsters begins with American reporter Steve Martin (Raymond Burr) lying injured in a makeshift Tokyo hospital while the city itself is in complete devastation. A friend of Steve’s, Emiko (Momoko Kōchi), discovers him by chance as she scours through the numerous people either injured or dying. She desperately tries to find a doctor to help him while Steve recounts the events that led to this point in the film.

Steve’s story begins with him making a stop in Tokyo on his way to Cairo for an assignment. A news report of a ship sinking draws Steve’s attention so he decides to investigate. One of the ship’s crew washes up on Odo Island. Steve and his security officer Tomo (Frank Iwanaga) fly to the island to gather more information for Steve’s story. On the island, Steve learns that the island’s inhabitants believe in a sea monster known as Godzilla that they worship as a god. The inhabitants believe that Godzilla is causing the disasters. That night, a storm strikes the island, destroying many of the homes and killing many of the people in the village. The villagers believe Godzilla is responsible.

Steve returns to the island the next day with Dr. Yamane (Takashi Shimura) who has been dispatched to investigate the cause of the destruction. The investigators discover huge radioactive footprints that contain a prehistoric trilobite. The investigation is interrupted by an alarm and Dr. Yamane’s team, the villagers and Steve head up a hill for safety. They encounter Godzilla when they near the top of the hill and begin to run in the opposite direction.

Dr. Yamane returns to Tokyo to report his findings to the government. He reports that Godzilla is 400 feet tall and was likely created by the repeated atomic bomb tests in the Pacific. The government decides to attempt to destroy Godzilla by dropping depth charges on him in the ocean despite Dr. Yamane’s reluctance to have the creature killed. After the briefing, Steve attempts to visit his old friend, Dr. Daisuke Serizawa (Akihiko Hirata), for dinner. However, Dr. Serizawa declines due to a previous commitment with his fiancé and Dr. Yamane’s daughter, Emiko.

Unbeknownst to Dr. Serizawa, Emiko wishes to break off their arranged engagement due to being in love with another man, Hideo Ogata (Akira Takarada). Hideo is the captain of a salvage ship. Emiko comes to Dr. Serizawa’s house to give him the bad news. However, Dr. Serizawa gives her a demonstration of his secret project which horrifies her so much, that she is unable to bring herself to end her engagement. Dr. Serizawa swears Emiko to secrecy, fearful of the destructive potential that his secret project could unleash if ever used.

Meanwhile, Godzilla resurfaces in Tokyo Bay and begins to attack the city. He destroys a train before returning to the bay. The next day, the Japanese military formulate a plan to use the electrical towers surrounding Tokyo to repel Godzilla from further attacks. Their plan is to supercharge the towers to either kill, stun, or deter Godzilla. That night, Godzilla returns and attacks the city for a second time. He breaks through the electrical towers and the military defense lines using his atomic heat breath. Steve dictates his observations of the destruction into a tape recorder, but he is injured during the attack. Godzilla eventually returns to the ocean, and the audience learns that they have now completed the loop that is Steve’s story from the beginning of the film.

Steve wakes up in the hospital to find Emiko and Hideo sitting by his bedside. Emiko is devastated by the city’s destruction and reveals Dr. Serizawa’s secret project to Steve and Hideo. The project is an oxygen destroyer which disintegrates oxygen atoms in salt water and causes all marine life to die of acidic asphyxiation. Emiko takes Hideo to Dr. Serizawa’s house, and the two lovers convince the reluctant scientist to use the weapon against Godzilla.