An alien invasion prompts a tag-team battle between Godzilla and Anguirus, the planet protectors, and King Ghidorah and the new monster Gigan, a cyborg with scythe-like claws, an abdominal buzz saw, winglike back fins, and pincerlike mandibles. In this action-packed film, which veers from the sublime to the ridiculous, the cockroachlike aliens—disguised as humans—use Gigan and King Ghidorah as weapons of conquest in their plot to take over a contaminated Earth. (Courtesy of The Criterion Collection) 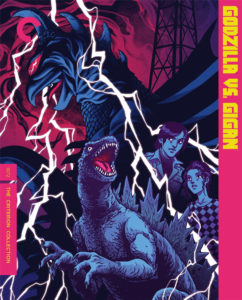 A young manga artist, Gengo Kotaka, goes on a job hunt in Tokyo and finds himself at the home offices of a brand new theme park called World Children’s Land. Gengo shows off his artwork to Kubota, the Secretary of World Children’s Land, who immediately hires the eager young artist. As Gengo exits the office building, he literally runs into a young girl being chased down by the Secretary and members of his security detail. The girl drops an audio tape reel when she crashes into Gengo, but flees the scene before recovering the tape. Gengo picks up the tape and hides it from the Secretary.

A short time later, the young girl, Machiko Shima, and her friend, Shosaku Takasugi, track down Gengo to retrieve the tape. Machiko explains to Gengo her scientist brother, Takashi Shima, has essentially disappeared while working at the World Children’s Land construction site and they want to get evidence against Gengo’s new bosses, stating “Children’s Land is the Enemy of Peace.” The trio play the tape, labeled ACTION 2 TAPE, but they learn nothing from the audio.

Miles away, on Monster Island, two famous monsters are triggered by the ACTION TAPE audio. Godzilla and Anguirus are both able to hear the audio and are bothered by it. Godzilla, the King of all Monsters, sends Anguirus to the mainland to investigate this signal. Immediately, the military puts up resistance to Anguirus, so he opts to head back to Monster Island to get reinforcements in the form of Godzilla.

Gengo goes to the World Children’s Land theme park, which is centered around a giant Godzilla tower, which stands 160 feet in the air. Gengo locates Machiko’s brother, Takashi, then shares Takashi’s location with his friends as a way to “save” the scientist.

The devious duo in control of the World Children’s Land theme park, Fumio Sudo, the Chairman, and Kubota, the Secretary, trigger ACTION 1 TAPE, which brings King Gedorah and Gigan to Earth from outer space. Sudo and Kubota are planning to use the space monsters as weapons in destroying and, eventually, colonizing Earth. It is revealed to Takashi Shima, Sudo and Kubota are actually aliens from a dying planet called M Space Hunter Nebula. These aliens are actually giant roach-like creatures that project human forms when dealing with Earthlings. However, little do the Secretaries know, another monster tag team heads to Tokyo at the same time, in the form of Godzilla and Anguirus.

Gengo, Machiko Shima, Shosaku Takasugi, and Tomoko Tomoe, Gengo’s girlfriend, break into the Godzilla Tower, to rescue Takashi Shima from his employers. They are able to locate the scientist and escape by repelling from the monster tower. While this occurs, the military engages in an extended battle with Ghidora and Gigan. The military use all of their offensive weapons but are easily dismissed. Shortly thereafter, Godzilla and Anguirus arrive to engage in the ultimate tag team match against Ghidora and Gigan. The four monsters exchange slams and laser rays, while destroying much of Tokyo, which is the ultimate goal of alien puppet masters.

To assist the alien monsters under their mind control, the Secretaries use a powerful laser of their own, shot from the Godzilla Tower, to injure and limit Godzilla. Gigan then uses its claws and buzzsaw filled belly to cut into Godzilla and Anguirus. The five humans realize they need to assist Godzilla, so they return to Godzilla Tower and fill the elevators with TNT. These alien creatures are tricked into detonating the TNT, which blows up the entire tower, exterminates the alien roaches, and frees Gigan and Ghidora from their mind control.

The liberated alien monsters continue to beat on Godzilla, then smash him into the destroyed tower. The pain from this shot reinvigorates Godzilla, who begins to pummel Gigan. Meanwhile, Anguirus keeps Ghidorah at bay, until Godzilla comes for the assist. Godzilla tricks Gigan into attacking Ghidora. When both of the alien monsters are down, Godzilla takes control of Ghidora and holds him while Anguirus rams his spikes into the space king’s body. Godzilla strangles and stomps on Ghidorah’s necks until he is able to break free. At that point in time, the two alien monsters fly off into space, giving Godzilla and Anguirus the hard fought victory.

With the Godzilla Tower destroyed, peace back in Japan, and all of the humans in a safe place, Godzilla and Anguirus return home to Monster Island.

User Rating: Be the first one !
3 weeks ago
3 minutes read
Show More
Back to top button
Close
Close