The combination of massive pollution off the coast of Japan and a microscopic alien life-form creates the most dangerous threat to Godzilla and mankind. The pollution mutates the life-form into a large, corrosive, pollution monster known as Hedorah. Hedorah attacks Japan, killing thousands with his corrosive body chemicals and poisonous gas. Godzilla travels from Monster Island to stop the deadly creature, but soon finds himself overcome by Hedorah. Can anything stop the deadly pollution monster in time, or will the citizens of Earth finally face the consequences for mistreating their environment? 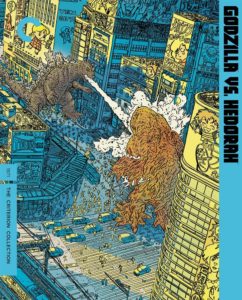 In the early 1970’s, the world as a collective whole cared little for the environment. This was never more evident then in the Japan depicted in Godzilla vs. Hedorah. A microscopic alien life-form, eventually called Hedorah, lands off the coast of Japan and begins feeding on the trash and pollution out at sea. Hedorah grows into a poisonous, acid-secreting sea monster, like that of a giant tadpole. Hedorah sinks an oil tanker and attacks Dr. Toru Yano (Akira Yamanouchi) and his young son Ken Yano (Hiroyuki Kawase) while they are investigating the pollution in the ocean. Dr. Yano is scared by the acid, but he survives the attack and informs the world of the existence of the deadly Hedorah. Ken has visions of his hero Godzilla coming to Japan and fighting the mysterious Hedorah, and he begins insisting that Godzilla will be humanity’s savior.

Meanwhile, Hedorah continues to grow and metamorphize into an amphibious form that can walk on land. It comes ashore and begins to feed on the pollution produced by many factories along the coastline of Japan. Hundreds of people are killed during the attack. Godzilla wades through the sludge and pollution in the ocean to confront Hedorah as the pollution monster feeds off some smokestacks. The larger Godzilla easily overpowers Hedorah, and the pollution monster retreats into the sea. Godzilla does manage to knock several pieces off the monster, but the pieces begin moving themselves and return to the sea to rejoin with Hedorah, which makes him more powerful.

Eventually, Hedorah returns to land again in the form of a flying saucer-like shaped creature. This version of Hedorah releases a deadly gas which kills thousands of people who are unfortunately caught in its wake. Hedorah eventually evolves into its strongest form, its “perfect form”, which is another land-based creature that even towers over Godzilla. This creature fires corrosive globs that eat through almost anything.

Meanwhile, Dr. Yano continues researching Hedorah despite his injuries. He discovers that Hedorah began as a tadpole like creature that fed off the world’s pollution. He also discovers that Hedorah can split into multiple pieces and then reform later. Most importantly, he discovers that if Hedorah is placed within a sufficient electrical charge, the electricity will cause Hedorah’s body to dry out, effectively destroying the pollution monster. Dr. Yano contacts the military to build a large electrical conductor near Mount Fuji.

At the same time, Japan’s youth population decides to evacuate the cities and travels to the hills near Mount Fuji to protest their country’s polluting activities and to celebrate one last day on Earth. They do this by starting bon fires which destroys the equivalent of several large trees and releases large amounts of carbon into the air. Ken is present for the protest. The fires, and the youth’s horrible 70’s music, draw the attention of Hedorah. Fortunately for the youth movement, Godzilla arrives again to fight Hedorah. However, Godzilla is overpowered by the now larger Hedorah who continues to morph back and forth between its iterations which keeps Godzilla off balance. Godzilla loses an eye and has his hand burned to the bone by Hedorah’s corrosive bodily fluids. An unconscious Godzilla is thrown into a pit and Hedorah attempts to drown the large lizard with his polluted, chemical sludge.

Unfortunately, the monsters’ battle has destroyed the wiring to an electrical tower, which cuts off the power to the electrodes. As the military struggles to reconnect the power, Dr. Yano and the commander of the Japanese forces use the headlights of some military jeeps to lure Hedorah into final position. Unfortunately, the electrical engineers are not able to reconnect the power once Hedorah is in between the electrodes. Fortunately, Godzilla uses his atomic breath to charge the electrodes which dehydrates the pollution monster. Hedorah sheds his outer body and attempts to fly away in his flying saucer form. Godzilla uses his atomic breath to propel himself into the air and knocks Hedorah down to the ground. Once grounded, Godzilla drags the now smaller Hedorah back between the electrodes. The military powers up the electrodes for a second time, with another assist from Godzilla, and they destroy Hedorah. Hedorah’s husk of a body is then smashed into dust by Godzilla.

In the aftermath, Godzilla returns to the sea, but not before giving the humans a stern look that indicates that he is displeased with their polluting ways. Ken runs after Godzilla and says goodbye to the giant lizard.

User Rating: Be the first one !
3 weeks ago
4 minutes read
Show More
Back to top button
Close
Close